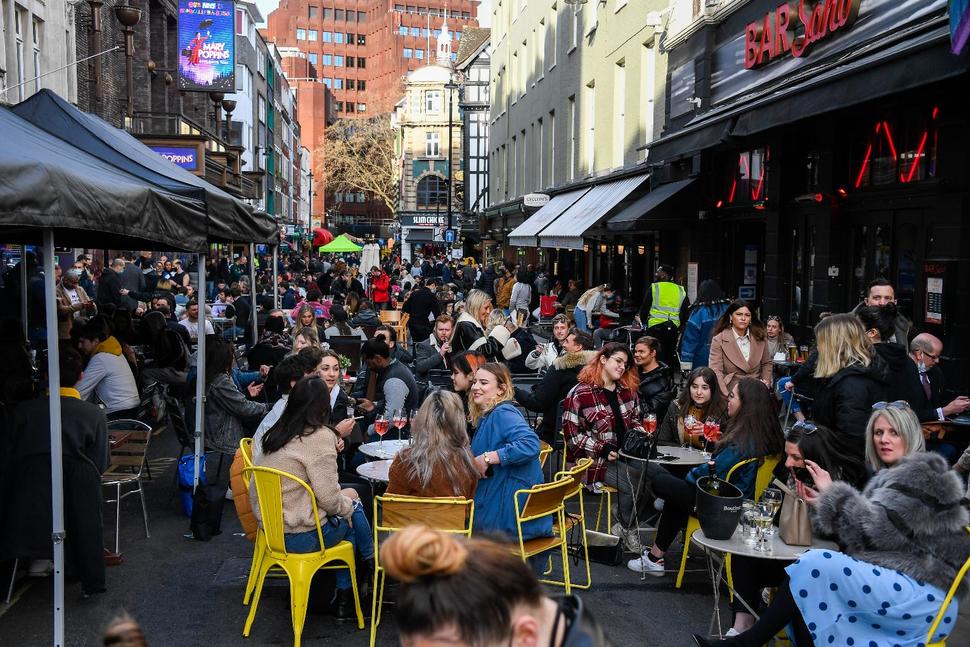 In this Monday, April 12, 2021 file photo, people sit, drinking and eating, outside cafes and pubs in Soho, central London, on the day some of England's coronavirus lockdown restrictions were eased by the British government. (Photo: AP)

The flash composite output index across the country registered at 61.7 in June, down slightly from May's record reading of 62.9, but still pointing to one of the strongest monthly improvements in business activity across the private sector since 1998, said the survey compiled by IHS Markit, a London-based global information provider, and the Chartered Institute of Procurement & Supply (CIPS), a Britain-based global procurement and supply organisation.

"Businesses are reporting an ongoing surge in demand in June as the economy reopens, led by the hospitality sector, meaning the second quarter looks to have seen economic growth rebound very sharply from the first quarter's decline," said Chris Williamson, chief business economist at IHS Markit.

Figures revealed that marked increases in output were seen across both the manufacturing and service sectors, with the two's flash purchasing managers' index (PMI) hitting 64.2 and 61.7 respectively, signalling robust expansions in activities.

Along with economic rebound in the month, the pressure of inflation was also intensified.

The rate of input cost inflation accelerated for the fifth month running and was the joint-fastest on record, equal with that seen in June 2008, data showed. In addition, the rate of output price inflation hit a fresh record high for the second month running.

"Record cost inflation last seen in 2008 filtered through to increasing output costs as manufacturers were unable to absorb these rapid rises any longer," said Duncan Brock, group director at the CIPS.

"In service businesses, consumers were hit with considerably higher prices for food and hospitality, increasing the threat of soaring inflation in the UK economy this summer," Brock added.

Looking ahead, companies remained confident that output will rise over the next 12 months as the recovery from the COVID-19 pandemic continues, said the report, adding that optimism was signalled at manufacturers and service providers alike.

British Prime Minister Boris Johnson has announced a four-week delay to the final step of England's roadmap out of COVID-19 restrictions until July 19, amid a surge in cases of the Delta variant first identified in India.