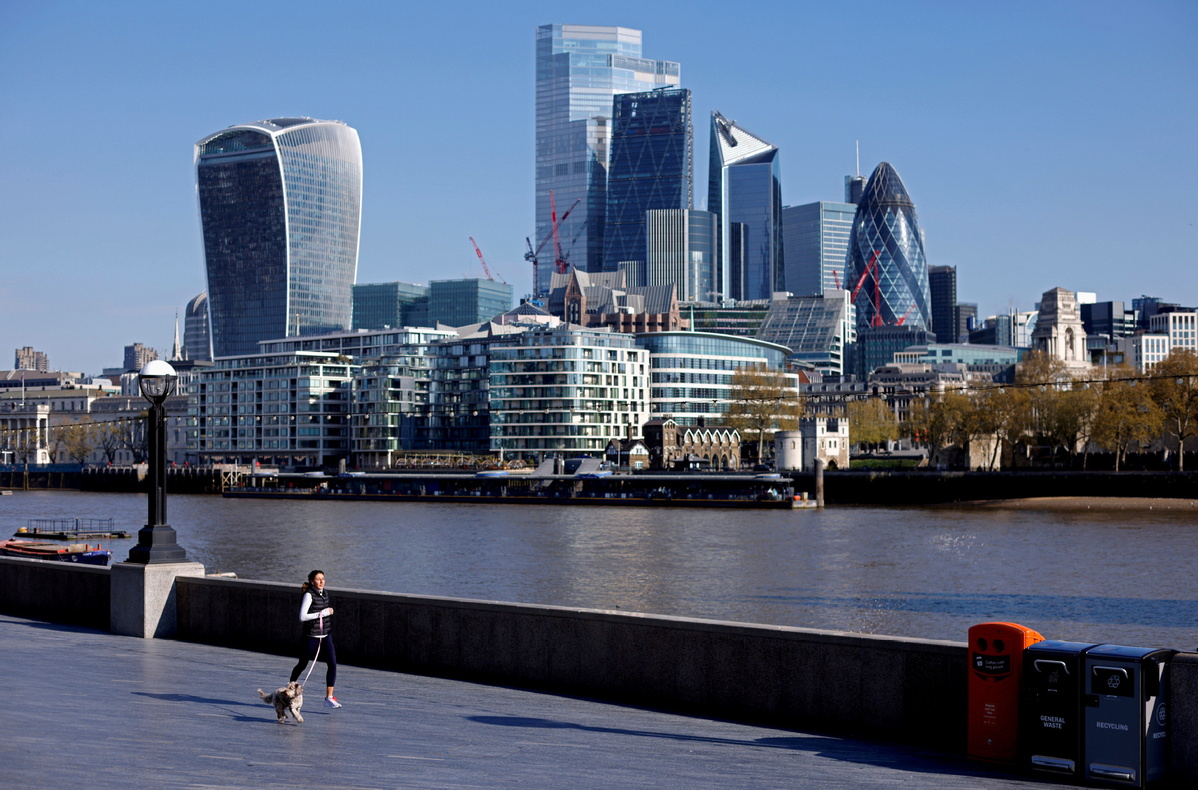 A woman exercises with a dog near the City of London financial district, in London, on April 30, 2021. (Photo: Agencies)

The United Kingdom's economy grew at a slower pace than predicted in the third quarter of 2021, according to official data released on Wednesday.

The Office for National Statistics, or ONS, said the economy grew by 1.1 percent in the July-to-September period, rather than the 1.3 percent previously estimated.

The ONS said weaker consumer spending was a key factor for the slowdown, and it noted the impact of energy businesses collapsing due to increased wholesale gas prices, with a consequent increase in bills for millions expected in April.

The office also noted the significance of global supply-chain problems for manufacturers and building companies.

Reuters news agency noted that the UK economy had reopened from lockdown in the summer, and that ONS figures show that household consumption was the main driver of growth as it increased during the quarter by 2.7 percent, which was more than expected.

"Our revised figures show UK GDP recovered a little slower in the third quarter, with much weaker performances from health and hairdressers across the quarter, and the energy sector contracting more in September, than we previously estimated," said Darren Morgan, the director of economic statistics development at the ONS. "With the economy reopening in the third quarter, households saved less in the latest period. However, household saving was still up on pre-pandemic levels."

The world's fifth-largest economy is now 1.5 percent smaller than it was before the novel coronavirus pandemic struck and is lagging behind other advanced countries, including France, Germany, and the United States, in terms of growth, said the ONS.

Reuters reported that investors anticipate a further slowdown in the fourth quarter of this year and a weak start to next year due to a rise in cases caused by the Omicron variant of the novel coronavirus.

Bethany Beckett, an economist with Capital Economics, told Reuters that although the economy had got better at coping with novel coronavirus restrictions, "the possibility of tighter restrictions in January is further darkening the outlook for GDP".

Thomas Pugh, an economist at the tax consulting company RSM UK, told the Financial Times that the Omicron variant is now "dominating the economic outlook".

"Even if there are no further restrictions, Omicron will create a slump in output in the restaurants and hotels sector and the recreation sector through December and January," he said.

The FT reported economists as saying excess savings held by households could boost the UK economic recovery once the current wave of infections decreases and consumer anxiety eases.

However, it noted concern that business investment contracted 2.5 percent in the third quarter, according to official estimates, edging it to nearly 12 percent below pre-pandemic levels.

Reuters said the Bank of England, the UK's central bank, is hoping for a revival of business investment to boost long-term growth.