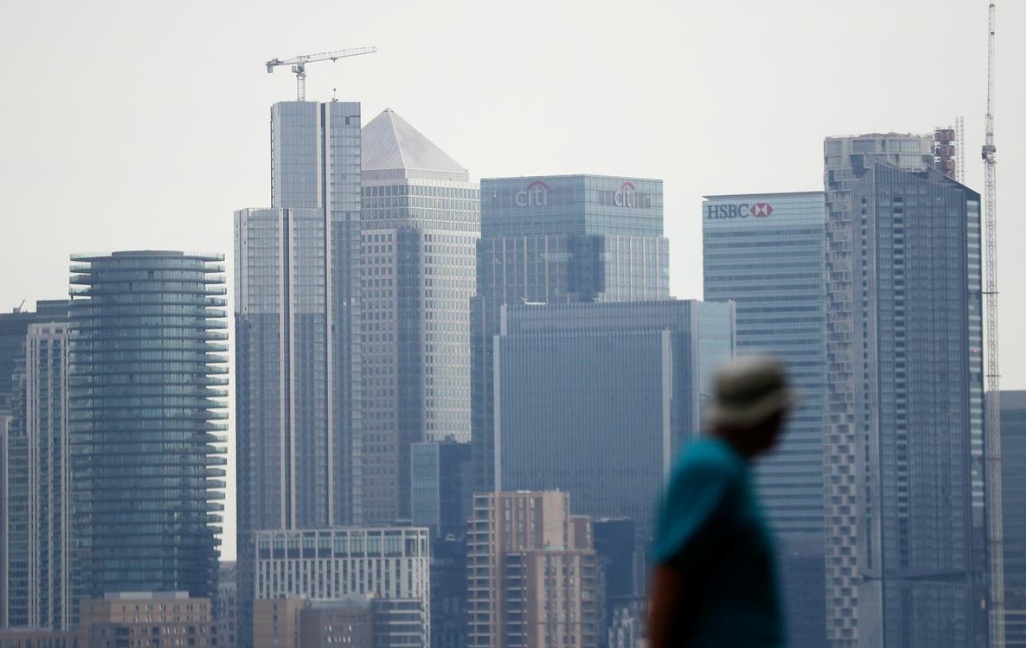 The novel coronavirus has pummeled the United Kingdom's economy with particular ferocity, shrinking it by a fifth during the second quarter and forcing it into its deepest recession on record.

The Office for National Statistics said on Wednesday gross domestic product fell by 20.4 percent during the quarter, with the decline since the end of 2019 double that of the United States, and second only among European nations to tourism-dependent Spain.

But the ONS did at least have a little good news, announcing an 8.7 percent bounce back during June from the lowest point in April.

Jonathan Athow, deputy national statistician at the ONS, told the Financial Times: "The recession brought on by the coronavirus pandemic has led to the biggest fall in quarterly GDP on record."

Overall, he said productivity saw "its largest fall in the second quarter since the three-day week", which was a time in 1973 when the UK reduced working hours amid electricity shortages.

Rishi Sunak, the UK's finance minister, said: "Today's figures confirm that hard times are here … But while there are difficult choices to be made ahead, we will get through this."

Business groups called on the government to support enterprises by slashing taxes and ensuring easier access to loans.

The BBC said the latest figures show the recession was caused by household spending plummeting because of the novel coronavirus lockdown, with shops closed for months and construction projects and factories mothballed. Hotels, restaurants, and schools were also closed, but many have since reopened, suggesting the economy will improve.

The ONS said the service sector experienced its biggest quarterly decline on record.

The data followed official figures on Tuesday that showed the cost of the economic crisis in terms of jobs, with the number of people in work falling between April and June by 220,000.

Sunak told the BBC the economy had performed less well than its EU counterparts because the UK is service-orientated and relies heavily on the hospitality industry and consumer spending.

"Those kinds of activities comprise a much larger share of our economy than they do for most of our European cousins," he said.

The vulnerability of businesses that rely on consumer spending was highlighted on Wednesday by an announcement from retailer Debenhams, which said it will cut an additional 2,500 jobs in its department stores and warehouses.

The Guardian newspaper said the retailer, which employs 14,500 people, has continued to suffer despite having reopened 124 stores after the lockdown was eased.

The group made 4,000 people redundant earlier this year.

With such carnage on the jobs front, the UK's students have much to think about, but at least those preparing to leave high school and enter university can relax about the way in which their grades will be calculated in the wake of the cancellation of exams.

The students were to have grades assigned to them but Gavin Williamson, the UK's education minister, now says they will be able to use the results of mock exams if they feel their assigned grades are too low.

Meanwhile, students in Scotland returned to class for the first time this week since the lockdown began five months ago.

The latest relaxation of the UK's lockdown comes as France has announced it is seeing a spike in novel coronavirus infections.

Prime Minister Jean Castex warned this week the nation has been going "the wrong way" for two weeks as the country's Health Ministry reported a spike is cases since Monday, and 14 deaths.

France has brought in stricter lockdown measures as a result, including the requirement that people wear face masks in more situations.

"The epidemiological situation, which we are following very closely, is deteriorating: 2,000 new cases per day compared to 1,000 three weeks ago," Castex told journalists.

Elsewhere in Europe, experts in Spain have said the nation is once again in a "critical situation" with the worst infection rate in Europe and around 5,000 new cases a day.

And Greece has also expressed concern about a resurgence of cases and imposed a night-time curfew on restaurants and bars as a result.