Britain's economy shrank by almost a fifth in the second quarter, entering recession because of the nationwide coronavirus lockdown, revised official data showed on Wednesday. 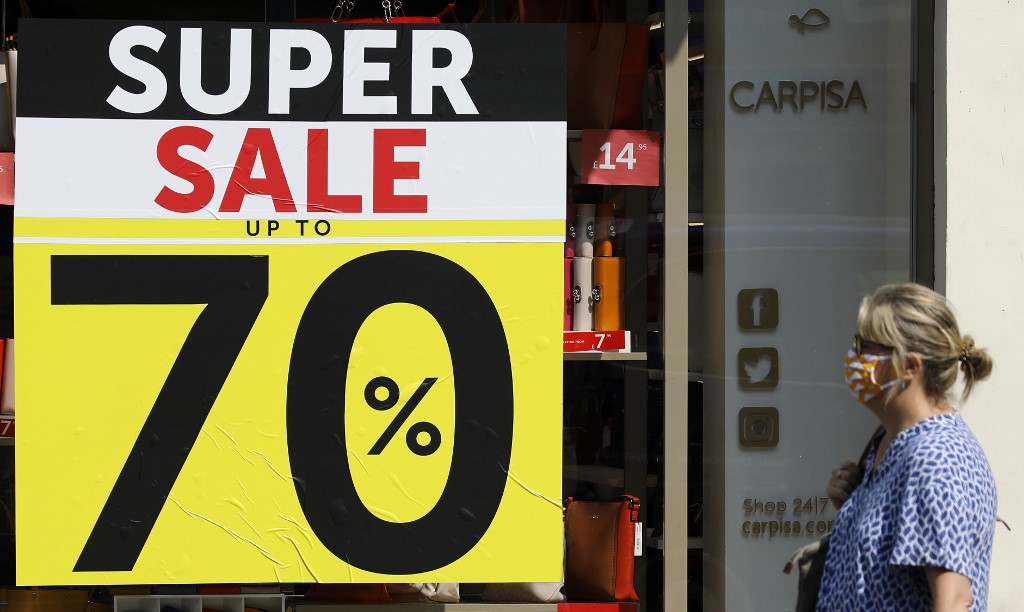 A pedestrian wearing a face mask or covering due to the COVID-19 pandemic, walks past a "Sale" sign in the window display of a shop in London on August 12, 2020. (Photo: AFP)

Gross domestic product contracted by a record 19.8 percent in the April-June period, the Office for National Statistics (ONS) said in a statement that revised its initial figure of a 20.4-percent slump.

The economy also declined by 2.5 percent in the first quarter, the ONS added. That was however worse than the previous figure of a 2.2-percent decline.

The grim data confirmed Britain has entered a recession with two successive contractions in economic activity, sparked by a nationwide lockdown on March 23 that was not relaxed fully until early June.

"While it is still true that these early estimates are prone to revision, we prefer to focus on the magnitude of the contraction that has taken place in response to the coronavirus pandemic," the ONS said.

"It is clear that the UK is in the largest recession on record," it added, noting also that the global health emergency had sparked record declines in economic activity around the world in the second quarter.

"The latest estimates show that the UK economy is now 21.8 percent smaller than it was at the end of 2019, highlighting the unprecedented size of this contraction," the ONS concluded.

During the second quarter, all sectors of the shattered economy suffered massive output falls.

Household spending plunged by 23.6 percent as most Britons stayed at home under lockdown, while business investment fell 26.5 percent.

More than 42,000 people who have tested positive for Covid-19 have so far died in Britain, the worst death toll in Europe.

There are fears that new restrictions aimed at preventing a second nationwide lockdown could snuff out an expected fragile recovery in the third quarter.

"And the risk now is that renewed containment measures send the recovery into reverse."

Economists are also fearful that Britain could experience spiking unemployment after the government's furlough jobs scheme -- under which it subsidises private sector wages -- ends in October.