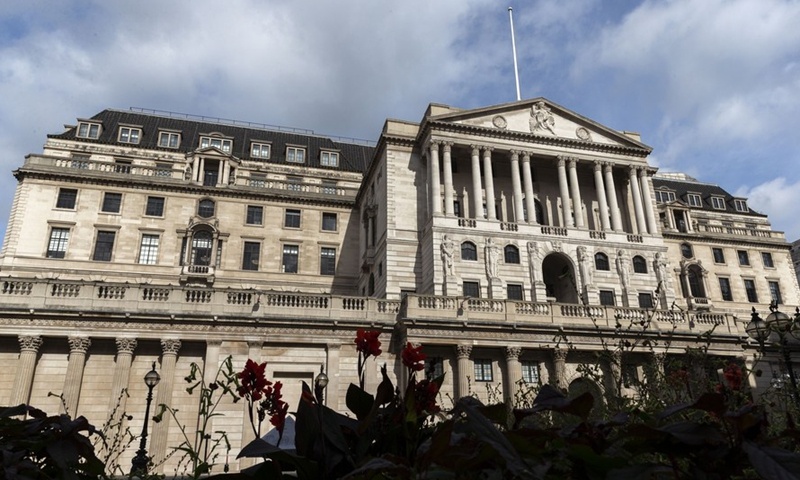 Photo taken on Sept. 12, 2020 shows a general view of the Bank of England in London, Britain. (Photo: Xinhua)

The British economy shrunk faster than at any point in 100 years in 2020, as headline gross domestic product (GDP) dropped by 9.9 percent, according to new data from the British Office for National Statistics (ONS) on Friday.

The last quarter of 2020 saw a rise of 1.0 percent in GDP but was sharply down on the 16.1 percent growth seen in the previous three months, said the ONS.

Monthly GDP increased by 1.2 percent during December 2020, as the two-week reopening of many shops and restaurants gave the economy a pre-Christmas lift, but remained 6.3 percent below February 2020 levels, said the ONS.

"Loosening of restrictions in many parts of the UK saw elements of the economy recover some lost ground in December, with hospitality, car sales and hairdressers all seeing growth. An increase in COVID-19 testing and tracing also boosted output," said ONS Deputy National Statistician for Economic Statistics Jonathan Athow.

Meanwhile, chief economist at the Bank of England Andy Haldane on Friday insisted that the British economy is a "coiled spring" poised to rebound as vaccines take effect and lockdown is eased.

However, not all economists in Britain are so optimistic, as there are serious concerns about how 2021 will go, with some predicting a mass surge in unemployment once furlough schemes end.

Suren Thiru, head of economics at the British Chambers of Commerce, said that "despite avoiding a double-dip recession, with output still well below pre-pandemic levels amid confirmation that 2020 was a historically bleak year for the UK economy, there is little to cheer in the latest data."

Thiru said he believes that despite the vaccine rollout, the scarring caused by the pandemic is "likely to crystallise as government support winds down and the prospect of persistent post-Brexit disruption, any recovery may be slower than the Bank of England currently predicts."

Thiru urged the British government to swiftly implement a package of measures that support businesses and the economy for 2021, including "removing the cliff-edges for business rate reliefs, VAT deferrals and furlough."

The ONS figures came as Britain recorded another 13,494 coronavirus cases and 678 coronavirus-related deaths on Thursday.