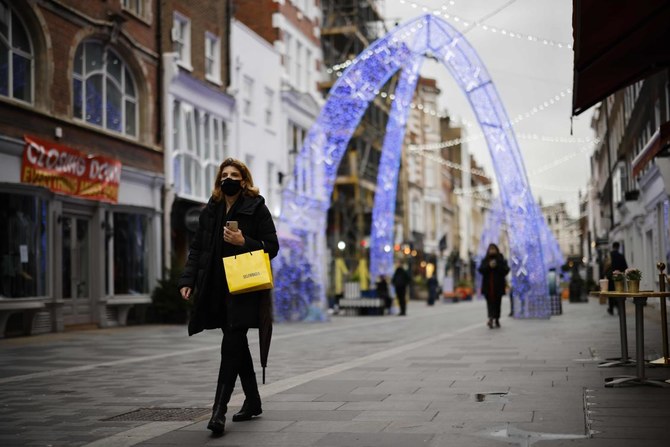 A pedestrian wearing a face mask the COVID-19 pandemic, walks along a street in central London on December 22, 2020. (File photo: AFP)

Britain's economy shrank by a record 9.9 percent last year on the fallout from the coronavirus, official data showed Friday, but a rapid vaccines rollout has boosted the outlook.

Activity was also hampered by Brexit turmoil ahead of Britain's final exit from the European Union at the end of last year.

"Over the year 2020 as a whole, GDP contracted by 9.9 percent, marking the largest annual fall in UK GDP on record," the Office for National Statistics said in a statement.

Gross domestic product grew 1.0 percent in the fourth quarter or three months to December, after an upwardly-revised third-quarter expansion of 16.1 percent.

The economy plunged into a historic recession in the first half and shrank a record 19 percent in the second quarter as the pandemic erupted.

Britain could still face a potential double-dip recession on the back of the latest lockdown that has been in place since January, but a vaccine-driven bounceback is widely forecast.

"The further restriction measures implemented in early January in light of new, more virulent strains of coronavirus have placed a firm dent in the UK's path to recovery," said economist Sam Miley at the Centre for Economics and Business Research.

"Nevertheless, we expect the UK economy to bounce back in the second half (of the) year, once the rollout of coronavirus vaccines has provided protection to a sufficient proportion of the population."

The data came one week after the Bank of England (BoE) forecast a recovery on the back of the Covid-19 inoculation programme, under which more than 13.5 million people have received a first dose.

Friday's "figures show that the economy has experienced a serious shock as a result of the pandemic, which has been felt by countries around the world," Chancellor of the Exchequer Sunak said.

"While there are some positive signs of the economy's resilience over the winter, we know that the current lockdown continues to have a significant impact on many people and businesses."

Much of the UK re-entered lockdown in early January to curb a variant Covid-19 strain that was deemed more transmissible, with restrictions similar to the initial curbs imposed in late March last year.

The BoE last week forecast that the economy would contract 4.0 percent in the first three months of this year, but added that recovery would then take root as vaccines help boost consumer spending -- with activity returning to pre-Covid levels in early 2022.

The British central bank's chief economist Andy Haldane, writing the Daily Mail newspaper on Friday, declared that the post-Covid economy would rebound "like a coiled spring".

"The rapid rollout of the vaccination programme across the UK means a decisive corner has been turned in the battle against Covid," wrote Haldane.

"A decisive corner is about to be turned for the economy too, with enormous amounts of pent-up financial energy waiting to be released, like a coiled spring."

In response to the pandemic, the BoE and UK government have pumped billions into the economy to stimulate growth and protect jobs.

The government has spent about £300 billion in emergency measures to combat the economic fallout, including a costly subsidy for private sector wages.

The BoE has also slashed its key interest rate to a record-low 0.1 percent.