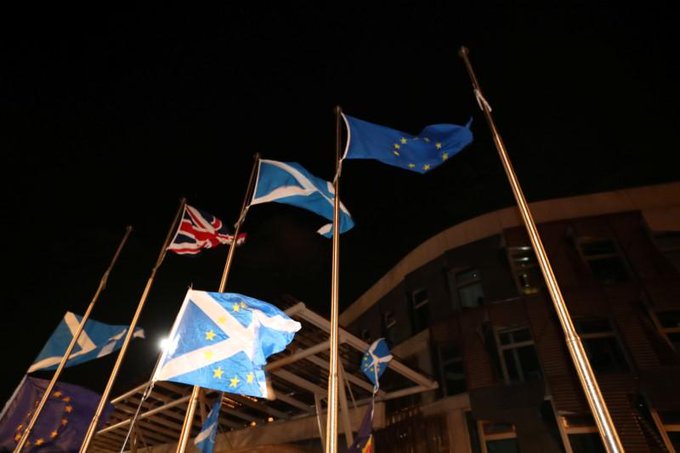 LONDON, March 19 (Xinhua) -- Britain and the European Union (EU) have exchanged draft legal texts detailing proposals for how relations should work after the current implementation period ends on Dec. 31.

"We are sharing ours in confidence as a negotiating document, as part of the ongoing negotiating process," a British government spokesman was quoted by media reports as saying.

Britain formally left the EU on Jan. 31, but both sides agreed that little would change during the year-long implementation period to enable a permanent trade deal to be negotiated.

Negotiating teams from both sides are expected to analyze each other's texts, with further conversations scheduled for next week.

Concern is emerging in London that the COVID-19 pandemic could derail Prime Minister Boris Johnson's aim to end the implementation period at the end of this year.

At a Downing Street briefing on Wednesday night, Johnson refused to say whether Britain will extend the Brexit transition period, telling journalists "there is legislation in place that I have no intention of changing."

The Daily Telegraph reported Thursday that Johnson will signal his intention to push on with delivering Brexit by the end of this year by publishing a trade bill to let Britain trade with other countries outside the EU.

The Telegraph also said there is increasing speculation in political circles that Britain will ask for an extension to the implementation period because of the strains put on governments due to the coronavirus.

Detailed Brexit trade negotiations planned for this week were cancelled amid rumors that the UK is now preparing the ground to seek a mutually agreed extension to the Brexit negotiations in the coming weeks, added the Telegraph.