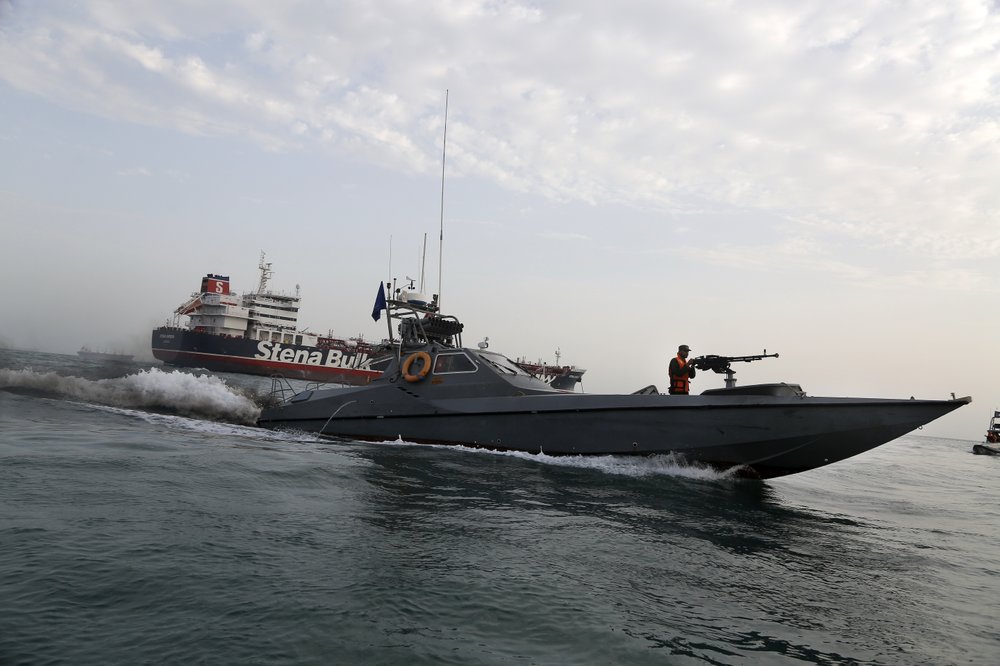 A speedboat of the Iran's Revolutionary Guard moves around a British-flagged oil tanker Stena Impero in the Iranian port of Bandar Abbas, Sunday, July 21, 2019. (Photo: AP)

Britain announced plans Monday to develop and deploy a Europe-led “maritime protection mission” to safeguard shipping in the vital Strait of Hormuz in light of Iran’s seizure of a British-flagged tanker in the waterway last week.

Briefing Parliament on the budding crisis, Foreign Secretary Jeremy Hunt accused Iran of “an act of state piracy” that must be met with a coordinated international reaction.

Iranian officials have suggested the Stena Impero was seized and taken to an Iranian port in response to Britain’s role in seizing an Iranian oil tanker two weeks earlier off the coast of Gibraltar, a British overseas territory located on the southern tip of Spain.

Hunt announced precious few details of the proposed protection mission, but said Britain’s European allies will play a major role in keeping shipping lanes open. One-fifth of all global crude exports passes through the narrow strait between Iran and Oman.

The foreign secretary said Iran must understand that its actions will only lead to a bigger Western military footprint in the region.

“It is with a heavy heart that we are announcing this increased international presence in the Gulf, because the focus of our diplomacy has been on de-escalating tensions in the hope that such changes would not be necessary,” Hunt said.

He also sought to put distance between Britain and its closest international ally, the United States.

Washington has broken with London on Iran policy as a result of President Donald Trump’s rejection of the international accord designed to prevent Iran from developing nuclear weapons. Trump pulled the U.S. out of the accord last year and re-imposed harsh sanctions, which have had a severe effect on Iran’s economy.

The foreign secretary said the planned European mission was not part of the U.S. policy of exerting “maximum pressure” on Iran.

It was unclear which countries will join the protection force or how quickly it can be put in place. Hunt said he had consulted with foreign ministers of Oman, the United States, France, Germany, Italy, Finland, Spain and Denmark.

There are no British nationals among the Stena Impero’s 23 crew members — most are Indian, as well as Filipino, Russian and Latvian nationals. Iran released new video showing the ship’s crew for the first time Monday, an apparent attempt to show they were unharmed.

Iran’s government spokesman Ali Rabiei said that there are diplomatic solutions to the current crisis, but he also defended Iran’s actions.

“When you illegally seize a ship in Gibraltar... we don’t deem it as necessary to show tolerance,” he said. “Some countries have asked for the immediate release of the British tanker. Well, we ask those countries to make the same request to Britain first.”

Britain says it acted lawfully off the Gibraltar coast to prevent illegal oil shipments to Syria that would have violated European Union sanctions. It says Iran broke international maritime law by forcing the Stena Impero to change course and go to Iran.

Britain says the tanker was in Omani waters at the time, which Iran disputes.

The tanker crisis is unfolding in the final days of British Prime Minister Theresa May’s leadership. The Conservative Party plans to name her successor Tuesday, and the new prime minister — either front-runner Boris Johnson or Hunt — is expected to take office Wednesday.

Friday’s seizure of the Stena Impero came amid heightened tensions between the U.S. and Iran. In June, Iran shot down an American drone in the Strait of Hormuz, and Trump came close to retaliating with airstrikes.

As the nuclear deal between Tehran and world powers unravels, the U.S. has expanded its military presence in the region. Iran has in turn begun openly exceeding the uranium enrichment levels set in the accord to try to pressure Europe into alleviating the pain caused by the sanctions.

European nations are working to save the nuclear deal and have tried to come up with ways to keep trading with Iran, but have run smack into Trump’s sanctions, which also target Iranian oil exports.

In the newly released video on Monday, the Stena Impero crew is seen dressed in red uniforms and seated around a table onboard as an unidentified Iranian man is heard thanking them for their cooperation. A cameraman is heard telling them not to look at the camera.

It wasn’t clear if the crew was under duress to take part in the filming.

Other choreographed shots show a man checking on the ship, the crew sharing a laugh and talking next to a coffee machine inside the ship. The crew’s chefs are seen preparing food. Another video released by Iran’s state broadcaster shows Iran’s flag hoisted on the ship’s bridge.

Meanwhile, officials in Gibraltar say the ship’s crew has been kept on board the vessel since its seizure July 4. Four Indian crewmembers, including the ship’s captain, were arrested, but not charged, and were then bailed. The crew is comprised of Indian, Pakistani and Ukrainian nationals.