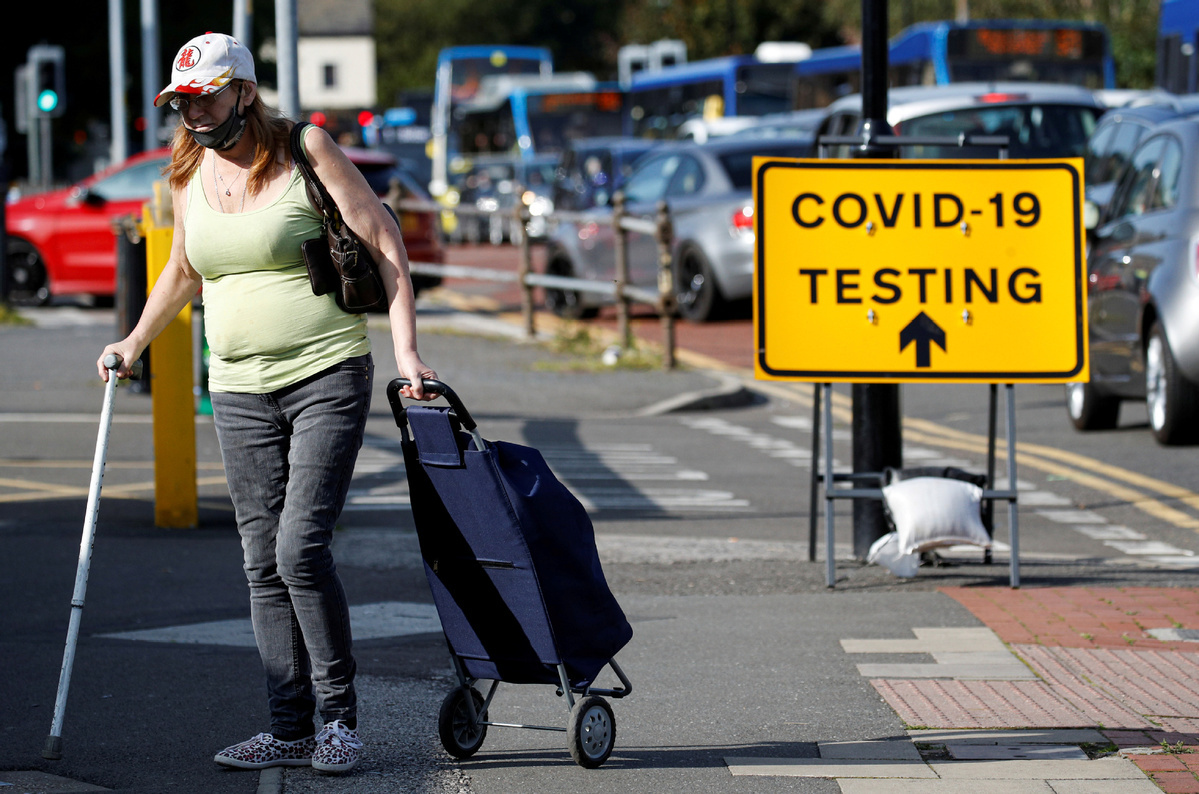 A woman walks past a sign for a COVID-19 test centre amid the coronavirus disease (COVID-19) outbreak, in Bolton, Britain, Sept 17, 2020. (Photo: Agencies)

The United Kingdom is braced for an unprecedented surge in demand for welfare services this winter as the nation's jobless total skyrockets because of the re-flaring of the novel coronavirus pandemic.

The British government is anticipating around 1 million extra people will apply for benefits in the coming months, according to the Financial Times.

Therese Coffey, the UK's work and pensions secretary, told the paper the government is expecting many more people to join the ranks of the unemployed when the nation winds up its furlough program this month, which ensured those who cannot work because of the pandemic were paid part of their wage.

But she said "catastrophic" job losses are not inevitable because a substitute program is likely to mean many workers will be retained.

"We've got this winter ahead of us …  I want to make sure people keep a roof over their heads," she told the paper as the government announced the start of its 238-million-pound ($308 million) Job Entry Targeted Support program, which will offer jobseekers advice on how to break into "growing sectors" of the economy, such as delivery services.

The UK's welfare system was supporting 1.2 million people before the pandemic began, but 2.7 million by August and the Bank of England and the Office for Budget Responsibility, which is a fiscal watchdog, have both warned that another 1 million people will likely be relying on benefits by the end of the winter.

But international delivery company DPD announced on Monday it will hire 20,000 new workers in Europe by the end of the year as a result of a surge in demand for deliveries during the novel coronavirus lockdown and other delivery companies, including Amazon, Hermes, and DHL Express, have similar experiences.

Boris Winkelmann, French-owned DPD's chief executive, said: "Since Easter, there has been a tsunami of parcels."

He said the company has also set aside 500 million euros ($588 million) to build logistics centers in the UK, France, and the Netherlands.

But for many sectors of the economy, there is no light at the end of the tunnel.

In Paris, things went from bad to worse for entrepreneurs on the weekend when the authorities announced the city's novel coronavirus alert was being raised to the maximum level, and that all bars must close from Tuesday for at least two weeks.

France reported 12,565 cases of COVID-19 on Sunday and has had rising infection rates for many weeks.

The situation in Paris mirrors one in the southern city of Marseille, where bars and restaurants were closed last week.

The office of Jean Castex, the prime minister of France, said the measures were "indispensable in the fight to curb the virus spread".

He added that it is more important now than ever to work from home, if possible.

Interior Minister Gerald Darmanin told French TV channel LCI and Europe 1 that the closure of bars will be hard for people to take.

"We are French. We love to drink, to eat, to live, to smile, and to kiss each other," he lamented.

And the situation has worsened in other parts of Europe as well. In the Czech Republic, a state of emergency has been introduced in the face of a resurgence of the virus. While the Spanish capital, Madrid, has gone back into lockdown, with people only allowed to leave their neighborhoods for essential journeys. Italy, too, has said it is close to introducing new lockdown measures.

With the virus spreading fast in Europe, many people are once again pinning their hopes on a vaccine as the best chance of getting life back to normal.

With a record 22,961 new novel coronavirus cases confirmed in the UK on Sunday, an increase of more than 10,000 on Saturday's total, Kate Bingham, the head of the British government's vaccine task force, told the Financial Times a vaccine is unlikely to protect everyone. She said, in the UK, less than half the population is likely to get a jab, if one becomes available.

"We just need to vaccinate everyone at risk," she said, while explaining that the government is expecting to vaccinate around 30 million people out of the UK's 67-million population.

"There's going to be no vaccination of people under 18. It's an adult-only vaccine, for people over 50, focusing on health workers and carehome workers and the vulnerable," she said.

In the absence of a vaccine, the nation's test and trace system will be crucial in limiting the number of transmissions. However, the Guardian newspaper reported on Monday that it suffered a technical glitch recently that meant nearly 16,000 cases were not reported to the public and that people who had been in contact with those cases went unwarned.

The glitch reportedly happened between Sept 25 and Oct 2.

Public Health England said it meant daily novel coronavirus cases in the UK were underreported, with around 11,000 cases a day last week actually being detected but only around 7,000 being made public, something the opposition Labour Party described as "shambolic".