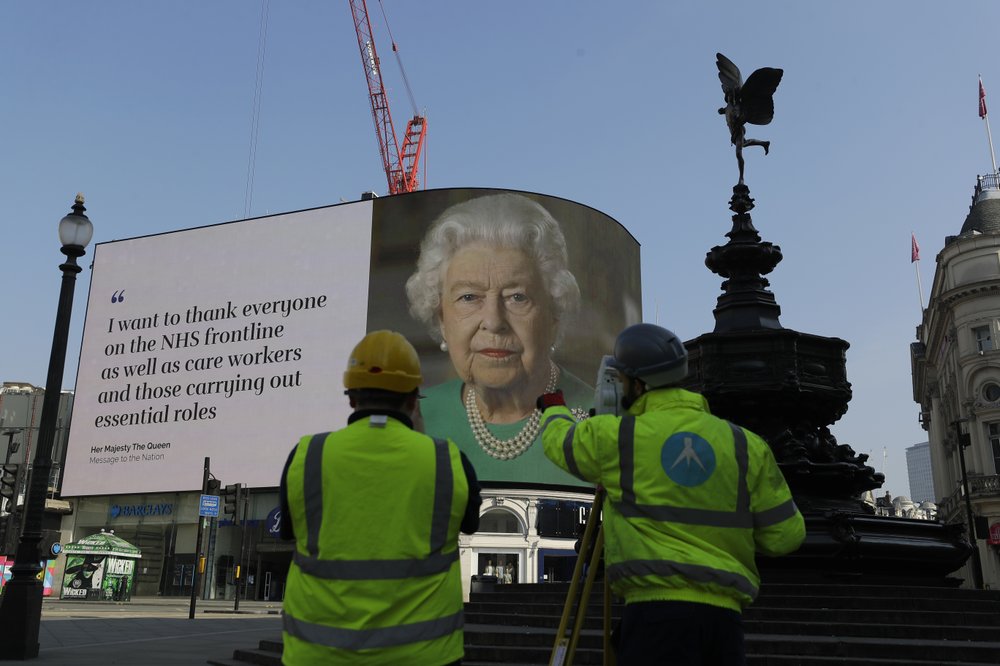 An image of Britain's Queen Elizabeth II and quotes from her historic television broadcast commenting on the coronavirus pandemic are displayed on a big screen behind the Eros statue at Piccadilly Circus in London, Thursday, April 9, 2020. (Photo: AP)

Britons braced Thursday for several more weeks in lockdown as Prime Minister Boris Johnson’s condition improved in a London hospital after three nights in intensive care for treatment of his coronavirus infection.

Foreign Secretary Dominic Raab said Johnson was “making positive steps forward” in the ICU at St. Thomas’ Hospital and was in good spirits.

Earlier Johnson’s spokesman, James Slack, said the prime minister “continues to improve.” Johnson has been receiving oxygen without being placed on a ventilator since his COVID-19 symptoms worsened and he was admitted to intensive care on Monday.

Raab, who is standing in for Johnson while he’s ill, told Britons it was too early to ease restrictions on public activity imposed March 23 to try to slow the spread of the virus.

The original restrictions were for three weeks, a period that ends Monday. But after chairing a meeting of the government’s crisis committee, COBRA, Raab said no decision on lifting the government’s stay-home order and business closures would be made “until evidence clearly shows that we’ve moved beyond the peak” of the outbreak.

Raab said “we’re starting to see the impact of the sacrifices we’ve all made, but the deaths are still rising and we haven’t yet reached the peak of the virus.”

He said the government and its scientific experts would assess the evidence again next week.

“We mustn’t give the coronavirus a second chance to kill more people and to hurt our country,” Raab said at the government’s daily news conference.

For most people, the coronavirus causes mild to moderate symptoms such as fever and cough. But for some, especially older adults and the infirm, it can cause pneumonia and in some cases death.

Almost 8,000 people with the coronavirus have died in British hospitals, according to government figures. While the number of new confirmed cases has begun to plateau, deaths have neared the peaks seen in Italy and Spain, the two countries with the greatest number of fatalities.

The figures may not be directly comparable, however. Not all the U.K. deaths reported each day occurred in the preceding 24 hours, and the total only includes deaths in hospitals.

U.K. officials have suggested restrictions could be tightened if people flock to parks and outdoor spaces over what is forecast to be a warm, sunny Easter weekend. Currently most parks remain open, and people are allowed to go outside for essential work. shopping and exercise.

While most Britons have observed the rules, there have been breaches. Police in the northwest English city of Manchester said they had broken up 660 parties in the city over the past two weeks, including some with DJs and fireworks.

In some cases, police have been accused of excessive zeal. Nick Adderley, the chief of Northamptonshire Police in central England, said Thursday that his officers might have to set up road blocks and start “checking the items in (shopping) baskets and trolleys to see whether it’s a legitimate, necessary item.”

Civil liberties group Big Brother Watch called those comments “outrageous” and Adderley later clarified that his officers would not be inspecting people’s shopping.

Johnson’s government was slower than those in some European countries to impose restrictions on daily life in response to the pandemic, leading his critics to accuse him of complacency. Britain also had one of the lowest numbers of hospital beds per capita in Western Europe before the pandemic, with only about 5,000 intensive-care beds nationwide.

That number has been increased vastly in the past few weeks, both by converting other areas of hospitals to treat COVID-19 patients and by building temporary facilities, including a 4,000-bed hospital at London’s Excel conference center.

So far, hospitals have been stretched but not overwhelmed, But some medics say they are struggling and still have not received adequate supplies of personal protective equipment, or PPE

“We’re still, by and large, wearing the same equipment that we were a few weeks ago,” said Dr. Nishant Joshi, an accident and emergency doctor who works in a hospital north of London.

“We’re getting a higher volume of patients, and they are more unwell and they’re probably more contagious,” he said.

“So it’s fair to assume that the PPE that we were kind of making do with, it was a a hit and hope situation, a few weeks ago. It’s fair to say that it’s no longer adequate.”

Slack, the prime minister’s spokesman, said “we are confident that enough supply is now reaching the front line” and that the government was working urgently to sort out any distribution problems with protective equipment.