WORLD UK facing supply crunch thanks to COVID and Brexit

UK facing supply crunch thanks to COVID and Brexit

Britain's factories, restaurants and supermarkets are facing stubborn supply problems due to the COVC pandemic and Brexit, sparking calls this week for government help ahead of Christmas. 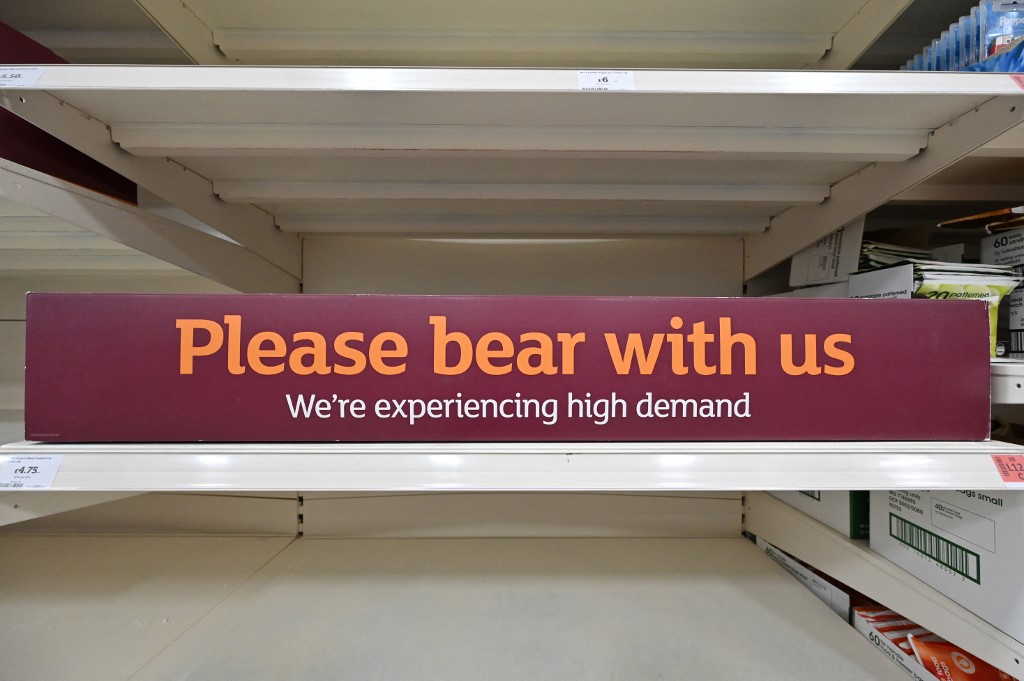 A sign requesting shoppers' patience about products temporarily out of stock is displayed on empty shelves in a supermarket at Nine Elms, south London on July 22, 2021. (File photo: AFP)

US burger chain McDonald's ran out of milkshakes and bottled drinks this week, blaming a lorry driver shortage that created supply chain issues and a slowdown in UK business activity.

Rival fast-food giant KFC was forced to remove some items from the menu, while restaurant chain Nando's has temporarily shut 50 outlets due to a lack of chicken.

"The reason for sounding the alarm now is that we've already had one Christmas cancelled at the last minute," Iceland boss Richard Walker told the BBC.

"I'd hate this one to be problematic as well," he added, urging the government to classify foreign lorry (truck) drivers as skilled workers to allow more on the roads.

"We've got a critical shortage now, which we can't address simply by recruitment because of the length of time it takes to train lorry drivers," said Rod McKenzie, director of policy at the Road Haulage Association.

"So we need some help to make sure the wheels don't fall off almost literally in the Christmas season," added McKenzie, who wants short-term visas for overseas lorry drivers.

"The immediate cause of general disruptions to supply is the ongoing impacts of the pandemic," King's College London economics professor Jonathan Portes told AFP.

"It is hardly surprising that closing down very large sectors of the economy and requiring millions of people not to work, and then reopening those sectors -- not once but several times -- would cause disruption to supply chains and mismatches in the labour market. This is true across Europe."

That resulted in fewer EU nationals working in the logistics sector, which tends to be shunned by Britons due to low pay and long hours.

The pandemic then persuaded even more foreign workers to leave.

"Ongoing travel restrictions combined with the impact of Brexit ... mean that many have not returned and may not want to do so," he said.

"Empty shelves (and) delayed or cancelled deliveries have become a familiar sight for many, as companies struggle to meet demands ... with decreased capacity," said Jonathan Owens, a supply-chain expert at the University of Salford.

Meanwhile, Britain's carmakers are slamming the brakes because of staffing constraints and a global shortage of microchips.

Car sales slumped by almost a third in July, as production tumbled nearly 40 percent to the lowest level for the month since 1956.