One in three British businesses is planning job cuts in the third quarter of this year as the economic impact of the novel coronavirus pandemic accelerates and the government's furlough program winds down. 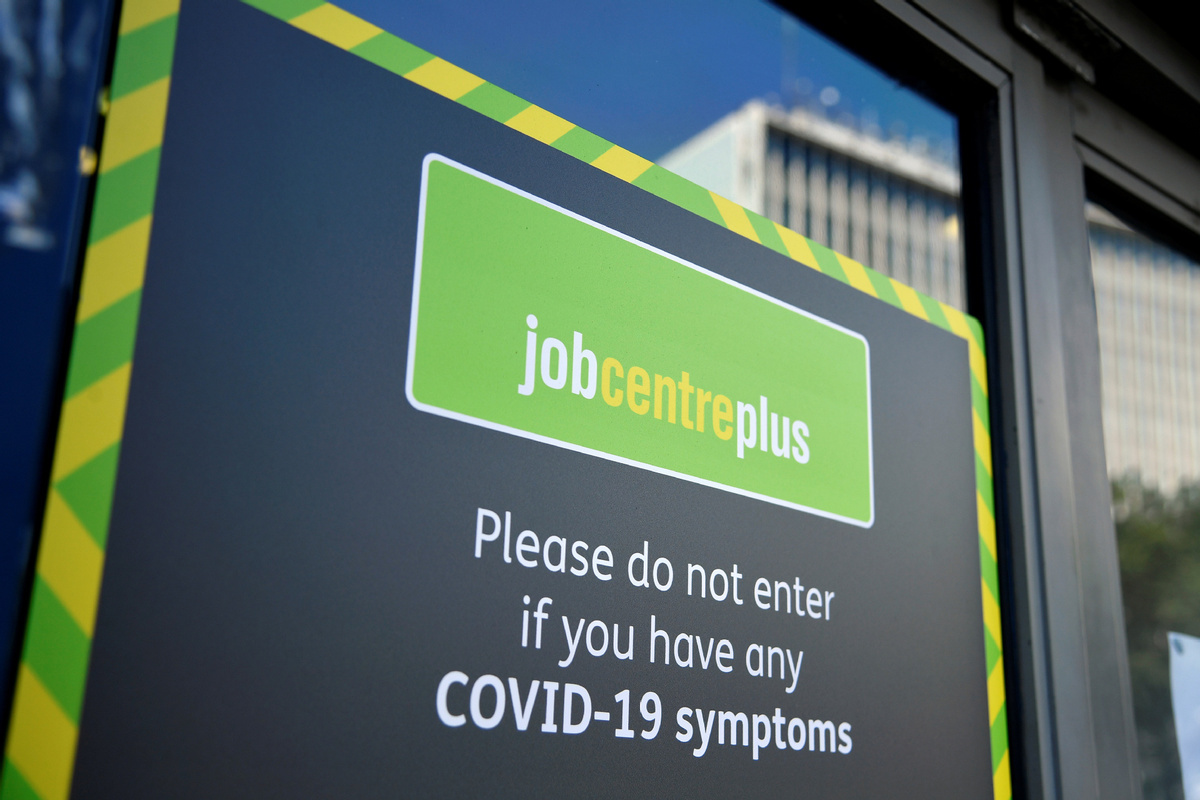 A sign is seen at a Job Center Plus office, amidst the outbreak of the coronavirus disease (COVID-19) in London, Britain, Aug 11, 2020. [Photo/Agencies]

Research by the Chartered Institute of Personnel and Development, or CIPD, and recruiter Adecco showed a 50 percent jump in the number of employers expecting to cut jobs compared to three months ago.

In the month to July 9, more than 2,000 employers were asked whether they planned to make redundancies.

The survey found that in the private sector, 38 percent of companies planned to make redundancies, compared with 16 percent in the public sector.

It, however, did also find some evidence of increased confidence in hiring workers, as the easing of the lockdown made recruitment less difficult. But the CIPD said it was unlikely to make up for the wave of redundancies.

The furlough program has paid 80 percent of workers' wages up to 2,500 pounds ($3,260) per month, preventing many job losses. However, employers have this month been forced to start contributing toward the wage bill, with the program due to close at the end of October.

Gerwyn Davies, the CIPD's senior labor market adviser, said: "Until now, redundancies have been lowno doubt due to the job retention scheme－but we expect to see more redundancies come through this autumn, especially in the private sector, once the scheme closes."

It comes as data from the Centre for Retail Research suggests that more than 22,000 restaurant jobs have been cut already this year, double the number announced for all of last year.

Britain's economy will be officially declared in recession this week for the first time since the 2008 financial crisis, as the novel coronavirus outbreak plunges the country into the deepest slump on record, The Guardian newspaper reported.

Figures from the Office for National Statistics on Wednesday are expected to show that gross domestic product, or GDP, fell in the three months to June by 21 percent.

Economists consider two consecutive quarters of shrinking GDP as the technical definition of a recession. The slump in Britain is expected to be the biggest quarterly drop of any G7 economy due to the later launch of lockdown controls and the slower removal of harsh restrictions.

The National Institute of Economic and Social Research estimates that GDP will not return to the level recorded at the end of 2019 until the second half of 2023.

The institute's deputy director, Garry Young, said it could take Britain longer than hoped to regain its pre-pandemic growth trajectory.

"A rapid V-shaped recovery is a possible outcome still, but all the risks seem to be to the downside. If we get another wave of the virus and have to do more widespread lockdowns, that is going to knock the economy off that V path," Young said.

In Europe's largest economy the battle to recover from the pandemic-induced downturn is similar. German companies expect public life to be restricted for a further 8.5 months due to the novel coronavirus, a survey by the Ifo economic institute showed on Monday.

Hard-hit companies in Germany's leisure industry expect 13 more months of restrictions, while those in the arts, cultural and gastronomy sector expect another 11 months. The beverage sector is the most optimistic, foreseeing an end to restrictions in 6.4 months.

It comes as Germany's economy minister warned of an "alarming "rise in infections. "We need to flatten the curve and turn this around," Peter Altmaier told local media. His comments come as children in Berlin return to school for the first time in months.