British Prime Minister Theresa May faces a no-confidence vote Wednesday, a day after Parliament rejected her Brexit deal by a historic margin. 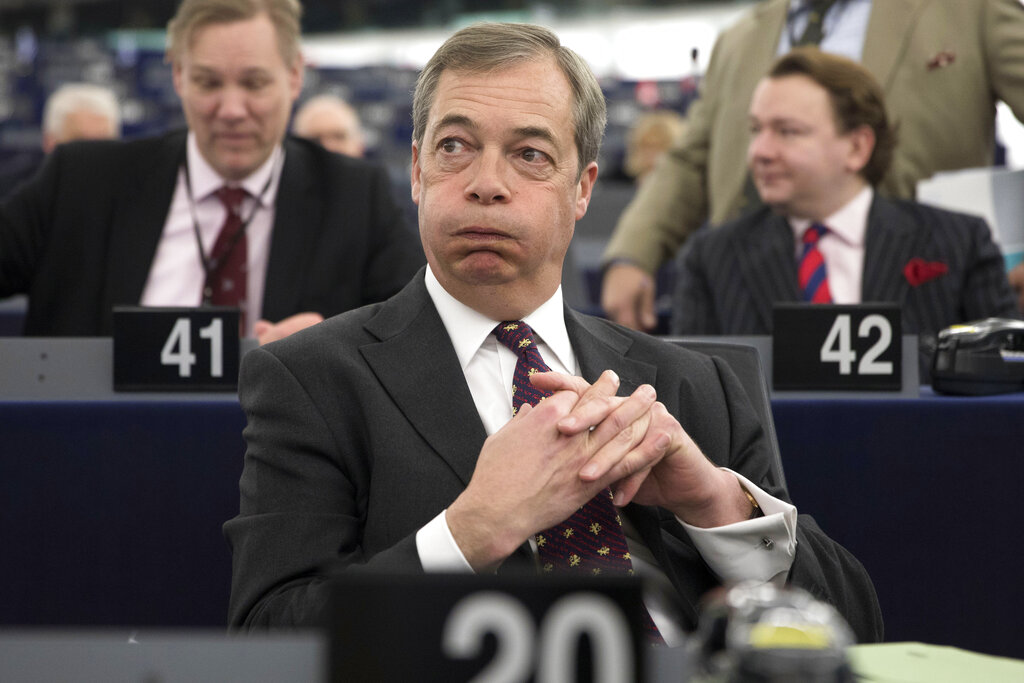 May is battling to save her job after staking her political reputation on a last-ditch effort to win support for the divorce agreement she negotiated with the European Union over the last two years. Though defeat was widely expected, the scale of the rout — 432-202 — was devastating for May's leadership.

Immediately after the vote, opposition leader Jeremy Corbyn tabled a no-confidence motion, saying it would give Parliament a chance to give its verdict "on the sheer incompetence of this government."

Still, most analysts predict May will survive because lawmakers from her Conservative Party are unlikely to vote against her, and the Democratic Unionist Party, which supports the government, has said it will continue to back the prime minister. If the government were to lose, it would have 14 days to overturn the result or face a national election.

After the biggest defeat for any British government in well over a century, May promised to consult with senior lawmakers on future moves, but gave little indication of what she plans to do next. Parliament has given the government until Monday to come up with a new plan for leaving the EU.

"The House has spoken and the government will listen," May said after the vote, which leaves her Brexit plan on life support just 10 weeks before Britain is due to leave the bloc on March 29.

May faces a stark choice: Steer the country toward an abrupt break without a deal on future relations with the EU, or try to nudge it toward a softer departure. Meanwhile, lawmakers from both government and opposition parties are trying to wrest control of the Brexit process from a paralyzed government, so that lawmakers can direct planning for Britain's departure from the EU.

But with no clear majority in Parliament for any single alternative, there is a growing chance that Britain may seek to postpone its departure date while politicians work on a new plan — or even hand the decision back to voters in a new referendum on EU membership.

Political analyst Anand Menon, from UK in a Changing Europe, said history is being made week after week in the Brexit saga, with government being held in contempt even as May soldiers on in Downing Street. 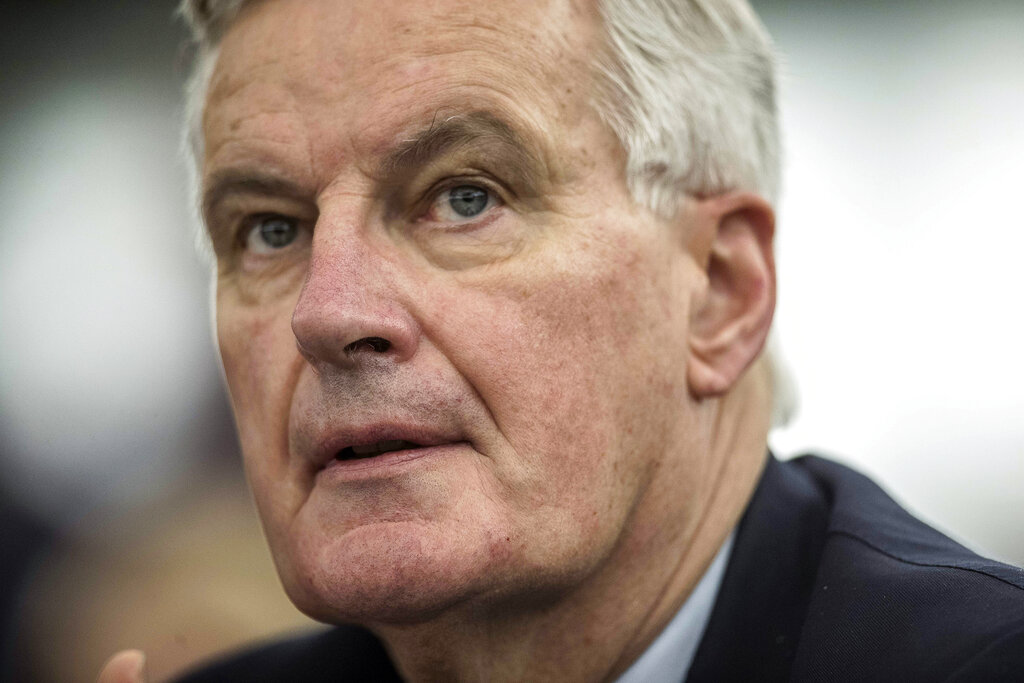 "She seems content with bringing something back to Parliament to vote on again," Menon said. "The thing about Theresa May is that nothing seems to phase her. She just keeps on going."

European leaders are now preparing for the worst — even though German Chancellor Angela Merkel said there was still time for further talks. She told reporters in Berlin that "we are now waiting to see what the British prime minister proposes."

But her measured remarks contrasted with the blunt message from French President Emmanuel Macron, who told Britons to "figure it out yourselves." He said Britain needed to get realistic about what was possible.

"Good luck to the representatives of the nation who have to implement something that doesn't exist," Macron said.

EU Brexit negotiator Michel Barnier said the bloc is stepping up preparations for a chaotic "no-deal" departure after Parliament's actions left the bloc "fearing more than ever that there is a risk" of a cliff-edge departure.

Economists warn that an abrupt break with the EU could batter the British economy and bring chaotic scenes at borders, ports and airports. Business groups expressed alarm at the prospect of a no-deal exit.

"Every business will feel 'no-deal' is hurtling closer," said Carolyn Fairbairn, director-general of the Confederation of British Industry. "A new plan is needed immediately."

But investors have so far shrugged off the rejection of May's deal. The pound was up 0.1 percent at $1.2869 in early morning trading in London, and the FTSE 100 index of leading British shares was down 0.1 percent at 6,888. 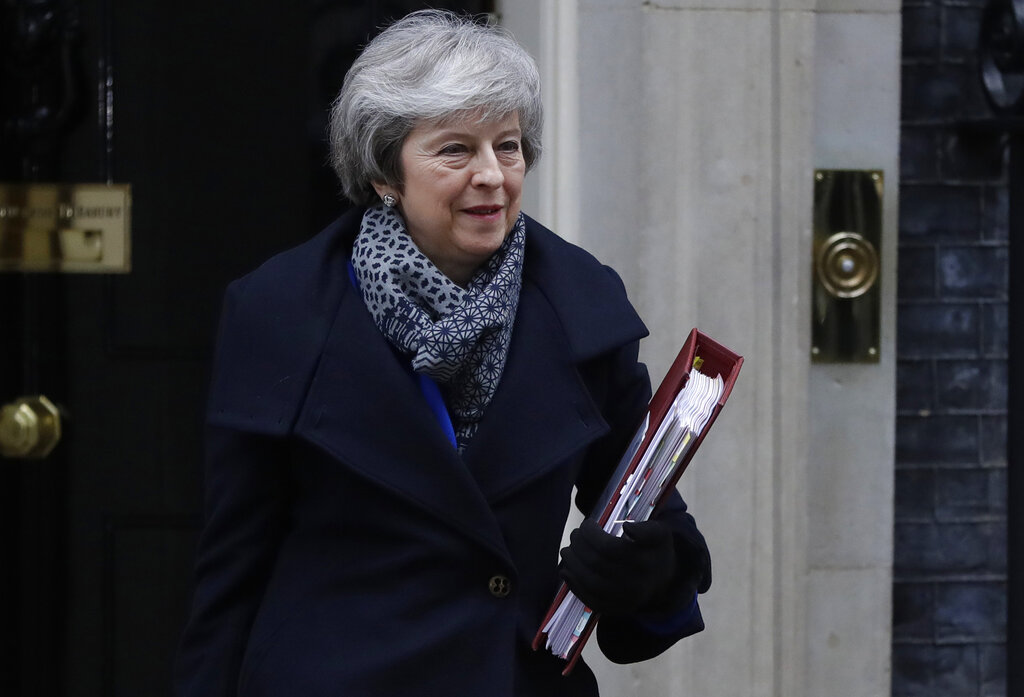 While the uncertainty surrounding Brexit remains elevated, many investors think Tuesday night's vote makes it less likely Britain will crash out of the bloc with no deal.

James Smith, an economist at ING, says the "calm market response" suggests investors think at the very least that the government will end up having to seek an extension to the Brexit timetable.

May, who postponed a vote on the deal in December to avoid certain defeat, had implored lawmakers to back her deal and deliver on voters' decision in 2016 to leave the EU.

But the deal was doomed by deep opposition from both sides of the divide over the UK's place in Europe. Pro-Brexit lawmakers say the deal will leave Britain bound indefinitely to EU rules, while pro-EU politicians favor an even closer economic relationship with the bloc.

The most contentious section of the deal was an insurance policy known as the "backstop" designed to prevent the reintroduction of border controls between the UK's Northern Ireland and the Republic of Ireland, an EU member state. Assurances from EU leaders that the backstop is intended as a temporary measure of last resort failed to win over many British skeptics.

European Council President Donald Tusk highlighted the quagmire the UK had sunk into, and hinted that the best solution might be for Britain not to leave.

"If a deal is impossible, and no one wants no deal, then who will finally have the courage to say what the only positive solution is?" he tweeted.

Cover image: A computer screen shows news about Brexit with British Prime Minister Theresa May as a broker watches his screens at the stock market in Frankfurt, Germany, Wednesday, Jan. 16, 2019.