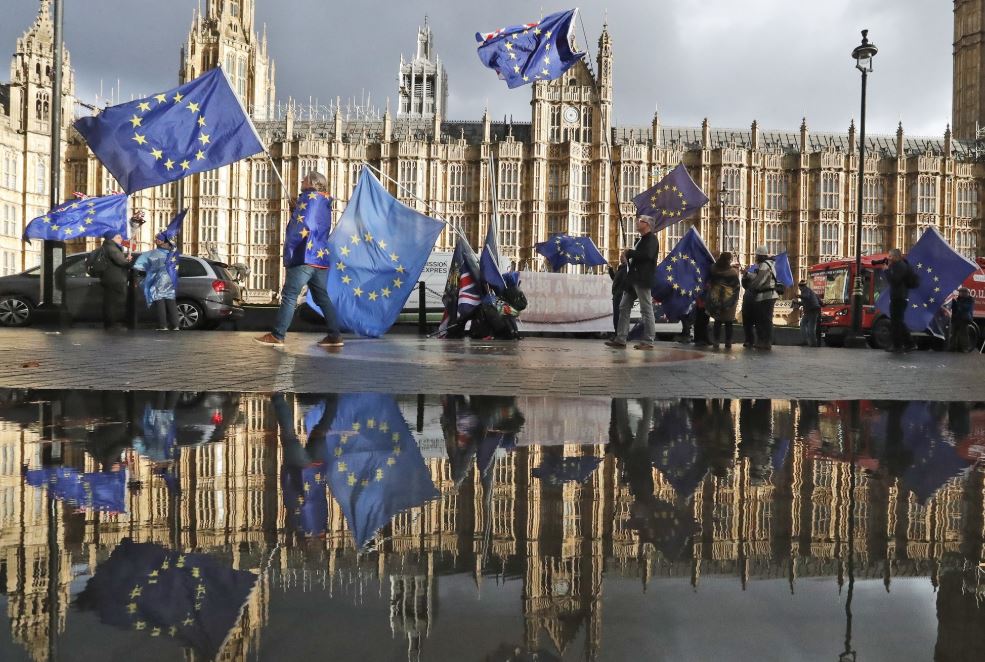 Protestors are reflected in a puddle as they wave European flags to demonstrate against Brexit in front of the Parliament in London, Monday, Dec. 3, 2018. (File photo: AP)

LONDON, June 7 (Xinhua) -- The UK government departments have spent at least 97 million pounds ($123.7 million) on consultancy to prepare for the country's departure from the EU, the National Audit Office (NAO) said Friday.

Cabinet Office information shows that 65 million pounds had been spent or agreed to be spent on consultancy services in support of preparations for UK's exit from the EU from April 2018 to April 2019, the NAO said, adding that it found an additional 32 million pounds in consultancy expenditure.

As the UK's exit from the EU has been "a significant challenge" for departments, they use consultants to fill specific skills gaps and to meet immediate staffing needs, it said.

It said around one quarter of the consultancy services accessed through the Cabinet Office provided project and program management support and almost a further one third of consultancy services relates to developing departments' preparations, and in particular planning for a no-deal Brexit.

Six consultancy firms have received 96 percent of the consultancy work, including Deloitte, PA Consulting, PwC and others. Most individual pieces of work with consultants ran for less than three months, but departments have regularly extended these, with a peak in extensions in April this year after Brexit is postponed from March 29 to Oct. 31, it found.

"Departments continue to prepare for EU exit and total spend on consultancy support will rise," the NAO said. (One pound=$1.28)