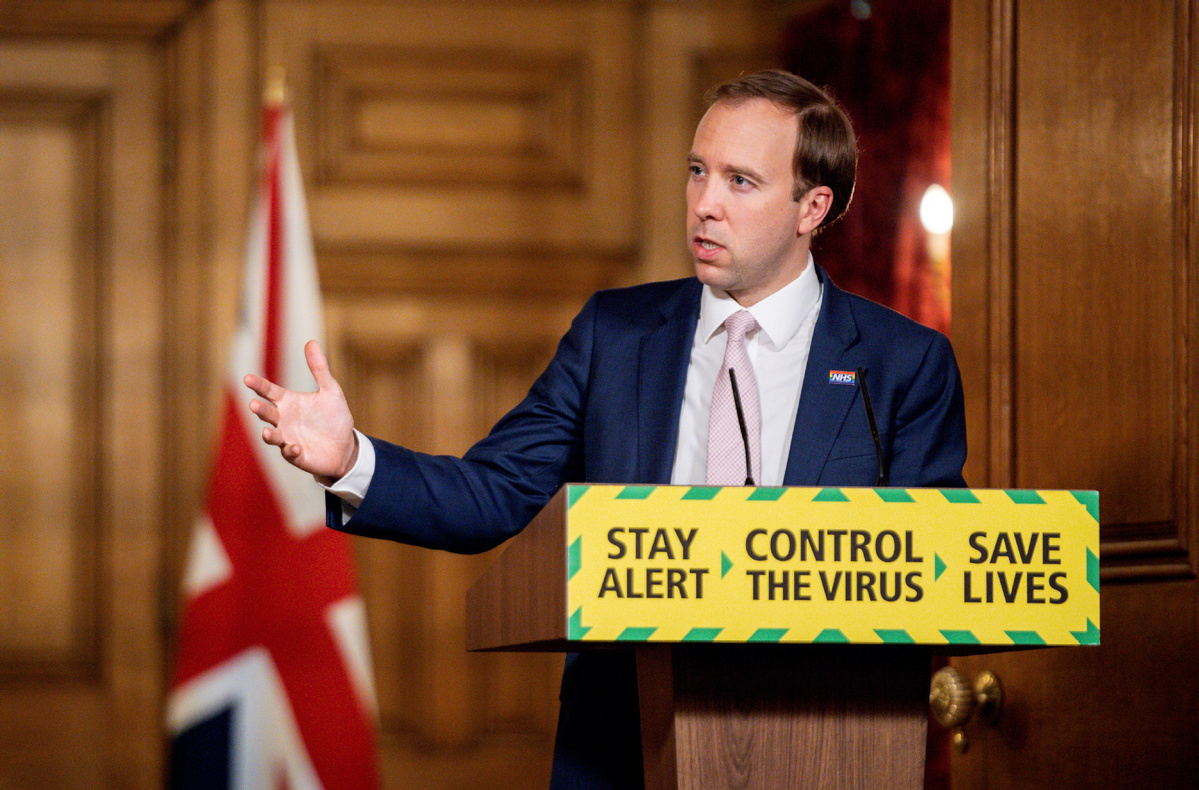 In a major U-turn, the United Kingdom government has confirmed it will abandon its existing novel coronavirus contact-tracing app and switch to the technology provided by Google and Apple.

Officials are hoping that the new approach will allow a contact-tracing app based on the Google and Apple model to be launched in the fall or winter.

In Thursday's government news briefing, Health Secretary Matt Hancock said that during recent testing of the app on the Isle of Wight, a technical glitch was found, and that the app worked well on Android phones, but not Apple iPhones.

He said: "As it stands, our app won't work because Apple won't change their system, but it can measure distance, and their app can't measure distance well enough to a standard that we are satisfied with."

He said he is "interested in what works" and so will be joining forces with Apple and Google "to bring the best bits of both systems together".

It comes as the number of people with COVID-19 in England continues to fall but the rate of decline is slowing, figures from the Office for National Statistics, or ONS, show.

The ONS data also revealed that more than one in four people who test positive for novel coronavirus cannot be reached by the government's test and trace system in England.

An ONS study found 10 positive cases in the past two weeks out of nearly 25,000 people tested in private households.

A further 135 people have died due to the novel coronavirus in the UK, bringing the total number of deaths to 42,288.

The government has ordered an urgent review of the potential ability of vitamin D to help fight the novel coronavirus amid growing evidence that those with low levels are at greater risk.

The Scientific Advisory Committee on Nutrition has been asked to look at studies linking vitamin deficiencies with poor outcomes.

The National Institute for Health and Care Excellence is also carrying out its own review with help from Public Health England.

"Vitamin D could almost be thought of as a designer drug for helping the body to handle viral respiratory infections," he said. "It boosts the ability of cells to kill and resist viruses and simultaneously dampens down harmful inflammation, which is one of the big problems with COVID.

"There are no clinical trials of vitamin D, to prevent COVID, ongoing anywhere in the world to my knowledge and clinical evidence for its use to reduce risk of acute respiratory infections is mixed," Martineau added.

The reviews will be published in the coming weeks and will guide NHS boards on whether the nutrient should be prescribed in hospitals and to high-risk groups to mitigate a second wave of COVID-19.

Meanwhile, data obtained by the Press Association news agency, under the UK's Freedom of Information laws, showed that drug offences in England and Wales rose by 27 percent during the lockdown despite total recorded crime dropping by a quarter.

National Crime Agency Director Lynne Owens said that in the initial stage of lockdown dealers were trying to disguise themselves as key workers by wearing high visibility clothing and operating from supermarket car parks.

In the financial sector, the Bank of England said it will pump an extra 100 billion pounds ($125 billion) into the UK economy to help fight the "unprecedented" virus-induced downturn.

The UK economy shrank by 20.4 percent in April, while official jobs data showed the number of workers on UK payrolls fell by more than 600,000 between March and May.