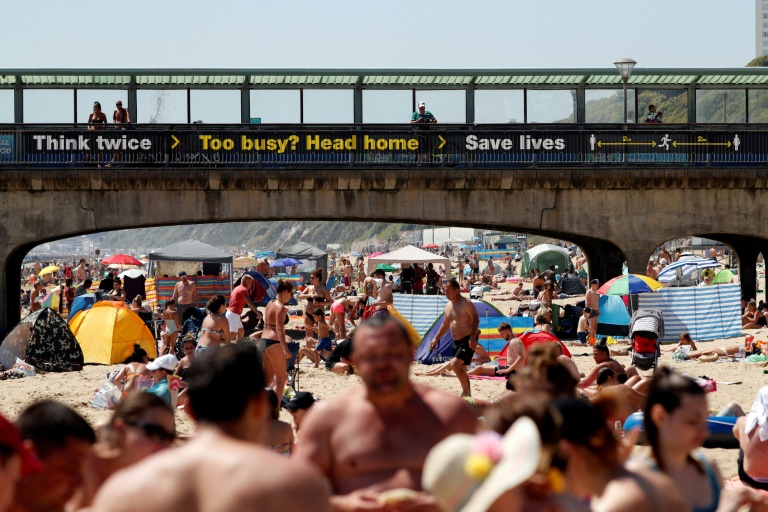 Britons revelled in soaring temperatures by flocking to beaches and parks ahead of a further easing of lockdown measures. (Photo: AFP)

Senior advisors to Boris Johnson's government on Saturday warned it was too early to lift the lockdown, just two days before the UK further relaxes coronavirus restrictions.

As people revelled in soaring temperatures by flocking to beaches and parks, several members of the government's own Scientific Advisory Group for Emergencies (SAGE) told ministers they risked a second wave of infection.

One -- epidemiologist Professor John Edmunds -- said the move was "a political decision".

Another prominent scientist, Sir Jeremy Farrar, director of the Wellcome Trust and also a member of Sage, warned explicitly on Twitter that the government's was wrong on its timing.

"TTI (test, trace and isolate) has to be in place, fully working, capable (of) dealing (with) any surge immediately, locally responsive, rapid results & infection rates have to be lower."

From Monday, the government will begin easing lockdown rules imposed in March and partially reopen schools in England and allow up to six people from different households to meet outside.

Reacting to the warnings, government minister Oliver Dowden said it was "absolutely right to urge caution".

But he stressed that "the government scientific advisory group consists of more than 50 scientists, all of whom will have their different perspectives... the government takes a collective view on the entire advice from Sage".

Deputy chief medical officer Jonathan Van-Tam, speaking alongside Dowden at the government's daily coronavirus briefing, added that Sage had a "high degree of confidence" that continued social distancing and other measures combined with effective contact tracing would not push the so-called R transmission rate up above the critical one figure.

Put simply, the R number is the calculation of how many people an infected person is thought to transmit the virus to on an average.

If the R value is one, each carrier passes it on to one other person.

Britain is the second hardest hit country after the United States with more than 38,000 coronavirus deaths and 270,000 cases.

Since May 13, people in England have been allowed to take unlimited exercise and sunbathe in parks, a relaxation of the original rules enforced in March.

Schools will not reopen on Monday in the other UK countries but there will be a partial lifting of the rules elsewhere, including being allowed to take more exercise in Scotland.

In Northern Ireland, more retailers can open and small outdoor weddings should begin from June 8.

People in Wales will be allowed to meet up with others outdoors from Monday.

In total, five government advisors on the pandemic have so far expressed concerns over lifting of the lockdown.

They have also been joined by political figures, including the mayors of London and Manchester.

Sadiq Khan, in London, said on social media he was "deeply concerned we are now rushing too fast to lift lockdown measures".

Unions have also called on the government to not rush back to school.

Official figures on Saturday showed that the death toll for those people who have died with the virus now stands at 38,376, an increase of 215 since Friday.