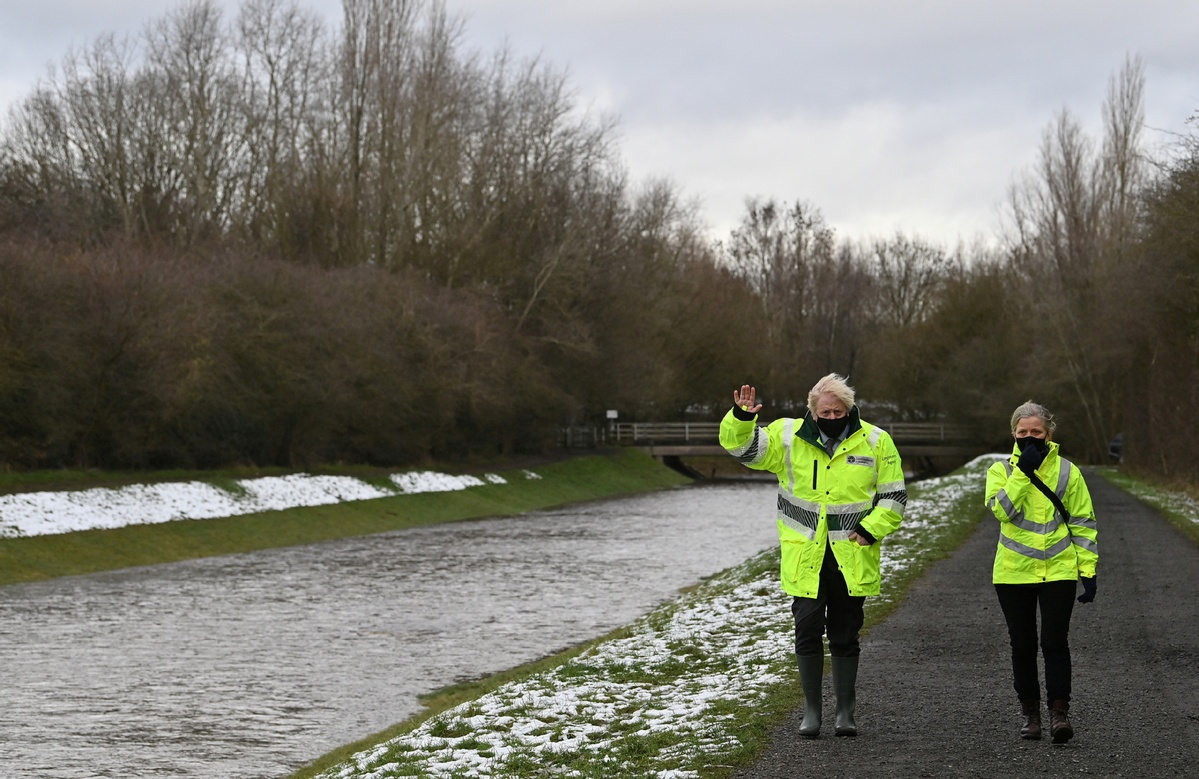 Britain's Prime Minister Boris Johnson talks with an Environment Agency worker during his visit to a storm basin near the River Mersey in Didsbury, Manchester, Britain January 21, 2021. (Photo: Agencies)

The United Kingdom government's independent environmental advice committee has issued stinging criticism of its policy toward reducing carbon emissions, saying it is "hard to discern any comprehensive strategy in the climate plans we have seen in the past 12 months".

Prime Minister Boris Johnson's government is committed to achieving net zero emissions by 2050, and he has regularly spoken about the importance of environmental policy in the country's post-pandemic recovery, but John Gummer, chair of the Climate Change Committee, said "the delivery has just not been there".

The timing and content of the annual report on the progress of steps toward decarbonization is particularly embarrassing for the government with the clock ticking down toward its hosting of the United Nations COP26 climate conference in Glasgow in November.

"This defining year for the UK's climate credentials has been marred by uncertainty and delay to a host of new climate strategies," the report added.

"Those that have emerged have too often missed the mark. With every month of inaction, it is harder for the UK to get on track."

The committee's report did acknowledge progress had been made in decarbonizing the power industry, but the picture was less positive when it came to buildings and surface transport, the two biggest contributors to carbon emissions.

Overall, UK carbon emissions were reduced by around 13 percent last year, but much of this is attributable to how the pandemic reduced the amount of journeys people made, rather than anything more substantial, so that reduction cannot be relied on to continue.

The Financial Times quoted committee chief executive Chris Stark as saying targets "are not going to be achieved by magic …we are very concerned about where things stand".

In reply, a government spokesperson said relevant policies would be coming soon, with actions to back up words.

"Our forthcoming strategies on heat and buildings, hydrogen, transport and comprehensive net zero strategy this year will set out more of the very policies the Climate Change Committee is calling for as we redouble our efforts to end the UK's contribution to climate change," they said.

Emma Howard Boyd, chair of the Environment Agency, said the report's conclusions demonstrate that contingency plans for climate shocks were "not high enough on the agenda".

Jess Ralston, of the Energy and Climate Intelligence Unit, told Sky News that a clear plan of action was needed to show Britain was taking the hosting of COP26 seriously, but time was running out.

"This year is the government's chance to prove to the world that they are not just talking about this, they are delivering on it as well," she said.

"If we don't take action now, we risk falling to the back of the pack on tackling climate change. We also risk missing out on new lifelong jobs in green industries, which are the future of the UK."