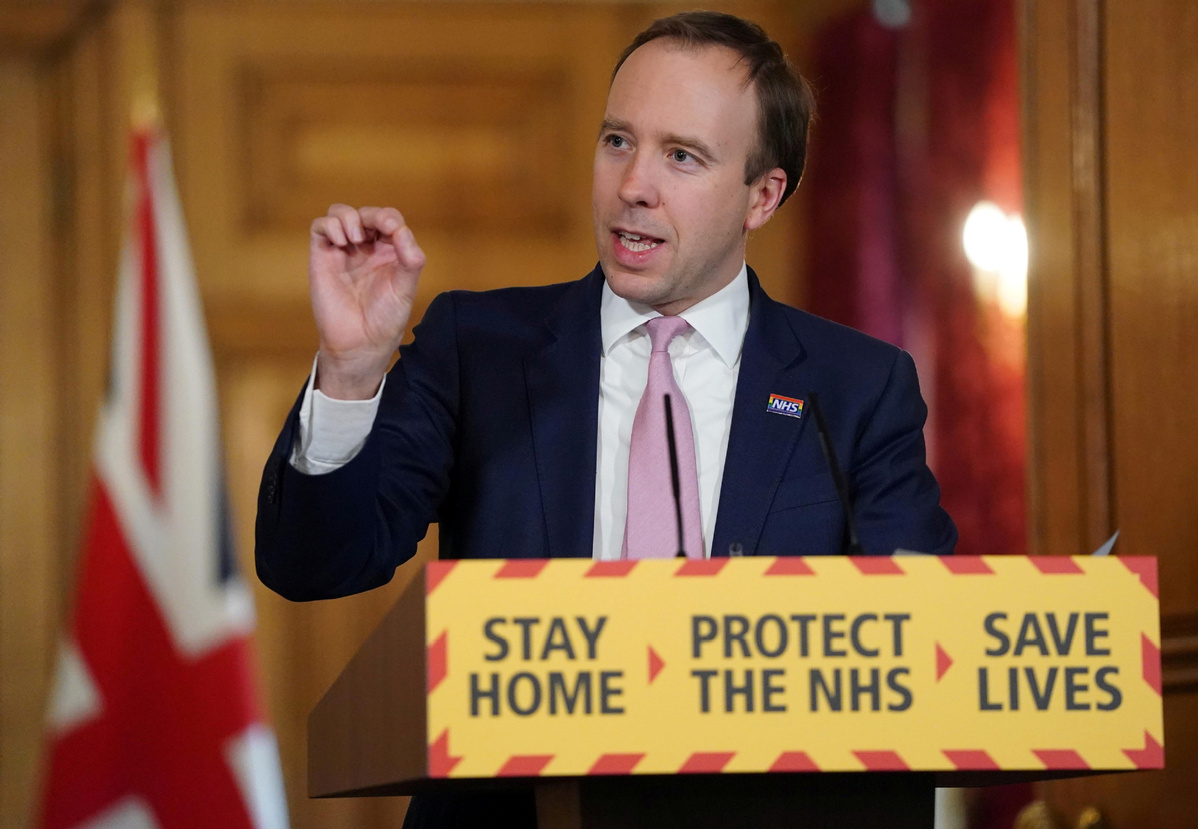 The British government kicked off a huge study on Thursday that will track the novel coronavirus status of 20,000 families in England and ascertain how the virus and the COVID-19 disease it causes are impacting the general population.

Volunteers taking part in the research organized by the Office for National Statistics and the Department of Health will regularly contribute swabs of saliva that will be tested to show the extent of infections.

One of the study's main aims is to establish how many people may be immune to the virus, information that will help in the eventual easing of lockdown restrictions, said Health Secretary Matt Hancock.

"Together, these results will help us better understand the spread of the virus to date, predict the future trajectory, and inform future action we take, including, crucially, the development of groundbreaking tests and treatments," he said.

Those taking part, a representative sample of the UK population, will initially be tested once a week for five weeks, and then once a month for a year.

The first results should be known in a month.

An antibody test developed by scientists at University of Oxford will be part of the study. It will identify people who have had COVID-19.

Professor Derrick Crook, one of those behind the test, told the BBC it should have regulatory approval for widespread use by May 4.

The test will help the government hit its target of carrying out 100,000 tests a day, a goal it has struggled to meet. Currently, around 23,000 people are being tested daily, and the theoretical maximum is 51,000.

The UK has also been wrestling with the pros and cons of recommending, or even enforcing, the wearing of face masks in public.

The idea has both supporters and detractors, with the mayor of London, Sadiq Khan, saying they should be compulsory in the capital, and the World Health Organization saying their positive contribution has not yet been proven.

Germany, however, has thrown its support behind masks and made them compulsory attire.

The nation, which allowed bookshops, florists, fashion stores and car dealerships to reopen on Monday, along with small retailers, had recorded 5,094 deaths linked to COVID-19 as of Thursday; a relatively small total, considering its population of 83 million.

Berlin, which has been lauded for its handling of the pandemic, approved human trials for potential vaccines this week. The nation is believed to be close to a breakthrough, as is the United States, the UK, and China.

The German trials, the fourth in the world so far, will involve 200 volunteers and be overseen by the regulator, the Paul Ehrlich Institute.

Spain saw its number of cases increase by 4,635 on Thursday, and deaths increase by 440, to 22,157, the country's Health Ministry said. The numbers suggest the situation there is easing.

The apparently stabilizing situation in much of Europe has led critics to question the UK government's handling of the pandemic.

Keir Starmer, the new leader of the opposition Labour Party, said in Parliament on Wednesday the nation is "way behind other European countries".

But Hancock, the health secretary, disputed claims of slow progress, especially in the area of testing.

During Thursday's daily briefing, he announced that, as of Friday, all essential workers and all members of their households will be able to book a test themselves on the government's website, to see whether they have the virus.

"I want to make it as easy as possible for people to get a test," he said.

And he said widespread testing will be a key part of the government's post-lockdown plan to control the virus.

He also insisted the government will not rush to end the lockdown, because an early exit and a second wave of infections would be "bad for our nation's health and our nation's economy". And he said 18,000 people will be hired to trace novel coronavirus infections when the lockdown is eventually lifted and that new software will also help track people with infections.

The Financial Times, meanwhile, said the UK's service sector and its manufacturing output are contracting more quickly than at any time in the 20 years of the IHS Markit/CIPS flash composite purchasing managers' index. And a senior official at the Bank of England has said in a speech that the lockdown has delivered the nation's most profound economic shock in a very long time.

Jan Vlieghe, a member of the bank's committee that sets interest rates, said in a speech reported by The Guardian newspaper: "Based on the early indicators, and based on the experience in other countries that were hit somewhat earlier than the UK, it seems that we are experiencing an economic contraction that is faster and deeper than anything we have seen in the past century, or possibly several centuries."

Meanwhile, research conducted by the paper suggests people from black, Asian and minority ethnic backgrounds in the UK have been dying in disproportionately high numbers.

The paper says people from the BAME demographic comprise 19 percent of hospital deaths but only 15 percent of the population prompting the Labour Party to call for answers.