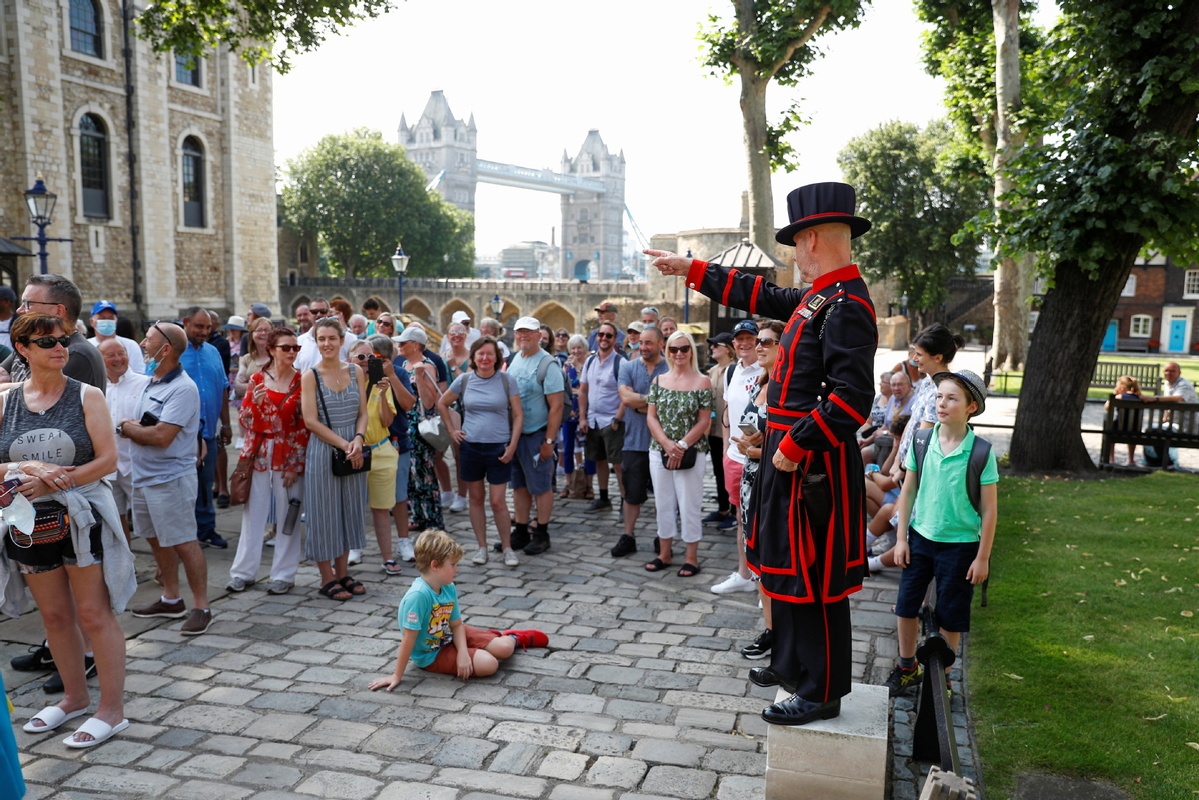 Promise of renewed freedoms met with excitement as well as unease

At one minute past midnight on Monday morning, dozens of nightclubs across England opened their doors to partygoers for the first time in more than a year, as the nation relaxed almost all COVID-19 restrictions.

One venue in London named its late-night live music festival 00:01, signaling that the event would start the very moment it was lawful.

After a brief lull in the morning, more clubs in major cities restarted the party from 10 am with day events, and pubs throughout England promoted free beer on Monday, which was dubbed Freedom Day.

This kind of revelry might not be what British United Kingdom Prime Minister Boris Johnson had in mind when he asked people to exercise "extreme caution "as England entered Step 4 of its lockdown-easing road map on Monday, when most restrictions on venue capacity, crowds and social distancing were lifted.

The UK government is only responsible for lockdown restrictions in England, in others parts of the UK－Scotland, Wales and Northern Ireland－these are handled by their respective authorities.

The promise of renewed freedoms was met with excitement among the public as well as unease. Just 48 hours after Johnson gave the green light to Step 4, daily cases of infections exceeded 40,000.More than 50,000 people tested positive on Saturday, the highest level in six months. Some social media users suggested that Anxiety Day was a more appropriate name for July 19.

And the chorus of health experts in opposition to the government's decision is growing louder, both in the UK and abroad. Johnson said the government needs to balance health risks against the damage a continued lockdown would inflict on the economy, education, livelihoods and general well-being. While daily cases are rising at an alarming rate and a so-called third wave of infections is close to inevitable, the government is hoping that its successful vaccination campaign, where two-in-three adults have been fully treated, will keep hospitalizations and deaths comparatively low.

But many are questioning why some restriction revocations that have a direct impact on the economy－such as the reopening of businesses－have been accompanied by others that have little bearing on enterprise, such as the removal of a law requiring face coverings in indoor public places and on transport.

A cohort of scientists unaffiliated with the UK government, known as the Independent Scientific Advisory Group for Emergencies, or Independent SAGE, released what it called an emergency statement last week, urging the government to rethink its strategy.

"This begs the question why dangerous public health decisions that are neither in the public interest, nor in line with public sentiment, have been made in the midst of a raging pandemic. Rather, credible sources suggest that the government is pursuing policies that will appease a political minority of its own backbenchers and lobbyists."

One particular element of the UK government's messaging that has puzzled experts is the suggestion that reopening on Monday is broadly equivalent to a date further in the future.

"To those who say why take this step now? I say, if not now, when?" Health Secretary Sajid Javid said in Parliament on Tuesday.

"This seems to imply that it's now or never, and it's everything all at once. This is a false binary, of course," said Peter English, a former chairman of the British Medical Association's Public Health Medicine Committee.

"The truth is, the answer to the question should we relax all restrictions is not 'yes, straight away', or 'no, not for the foreseeable future'. Other, more sensible answers are 'not yet' and 'maybe some of the restrictions can be relaxed, but others must be kept for longer'."

The UK government has published a series of recommendations for how individuals and businesses might conduct themselves after the lockdown. The guidance said some venues might consider a health pass system, where people wishing to gain entry must prove they are vaccinated or have tested negative via the national healthcare app or printed letter.

France has mandated a similar system, and the UK government said it might consider following suit, but for now it is up to businesses to decide.

Last week, Peter Marks, chief executive of REKOM UK, which owns 42 nightclubs, told the Press Association that his venues would be reopening at full capacity without any requirement for a negative COVID-19 test or proof of vaccination.

The government's guidance also advised that people wear masks in crowded places and on transport, though, again, this remains a choice.

"I am dumbfounded by the notion that public health can be left to individual choice when in the case of infectious disease it is, in fact, the epitome of collective responsibility," said Stephen Griffin, who is an associate professor at the University of Leeds School of Medicine. "The planned relaxations on 'freedom day' amount to a dangerous, irresponsible and experimental gamble that poses a very real threat of unnecessary harm to the British public."

The prospect of new variants emerging is another area of grave concern among several experts. The worry is that letting the virus run unchecked through a partially immune population will lead to the emergence of more resilient strains of the novel coronavirus.

"With the way we are opening up, we could see one or two million infections in a highly vaccinated population," Martin Hibberd, a professor of emerging infectious diseases at London School of Hygiene and Tropical Medicine, said in The Lancet.

"That is the perfect environment for generating new variants that might be more resistant to vaccine protection."

Independent SAGE said that the UK government's strategy threatened to undo vaccine progress both in the UK and other countries. The group said that "unmitigated transmission" in a partially vaccinated population provides a "fertile environment" for variants that could have huge consequences for the pandemic.