Britain fell silent on Sunday in tribute to its war dead as royals and politicians commemorated a low-key Remembrance Day without the usual solemn pageantry, owing to the coronavirus pandemic. 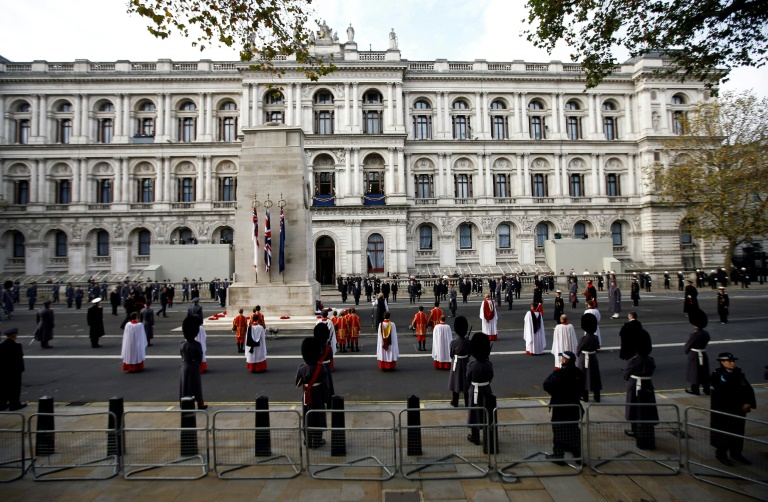 A national wreath-laying Remebrance Sunday ceremony proceeded at the Cenotaph war memorial in London, but there were no lines of veterans marching past or crowds watching because of the Covid-19 pandemic. (Photo: AFP)

The country observed a two-minute silence at 11:00 am (1100 GMT), the time on November 11 when the guns stopped firing in World War I after four years of horrific fighting.

A national wreath-laying ceremony proceeded at the Cenotaph war memorial in London, but there were no long queues of veterans marching past or crowds watching because of the Covid-19 pandemic.

"We come together every November to commemorate the servicemen and women from Britain and the Commonwealth who sacrificed their lives for our freedom," Prime Minister Boris Johnson said ahead of the ceremony.

"In this time of adversity, no virus can stop us from honouring their memory, particularly when we have just celebrated the 75th anniversary of victory in the Second World War.

"And in times of trial, our tributes matter even more."

This year, after Black Lives Matter protests spread to Britain from the United States, Johnson has also called for greater acknowledgement of the role of black and Asian troops in World War II.

He cited the British Indian Army -- the "largest volunteer force in history" -- and the 14th army, the "Forgotten Army" comprising mostly Commonwealth troops who fought a brutal campaign against Japanese forces in Burma.

Earlier in the week, Queen Elizabeth II laid a bouquet of orchids and myrtle on Britain's Tomb of the Unknown Warrior, marking 100 years since the remains of an unidentified soldier were brought back from northern France.

The 94-year-old monarch staged a private ceremony at the tomb in Westminster Abbey, using a floral arrangement modelled on her wedding bouquet, according to Buckingham Palace.

Since 2017, heir-to-the-throne Prince Charles has taken his ageing mother's place at the Cenotaph ceremony.

Dressed in military uniform and with the queen watching from a balcony, Charles laid a large wreath at the monument near parliament, stepped back and saluted. He was followed by Johnson, opposition leaders and former prime ministers.

A handful of socially distanced serving and former personnel then paid their own tributes, a marked reduction on years past.

Since Thursday, England has been in a second coronavirus lockdown but varying levels of restrictions were already in place across the country, hampering efforts to raise funds for military veterans.

The Royal British Legion has warned it risks a shortfall in donations of millions for the annual Poppy Appeal.

Poppies have been Britain's symbol of remembrance since the 1914-1918 war, when the red flowers grew on the scarred battlefields of northern France and Belgium.

The government said it wanted to keep crowds "to a minimum" at regional remembrance events, and told organisers to "discourage the public from attending". Church services were either cancelled or broadcast online.

The Royal British Legion encouraged people to display poppies in windows or stand on doorsteps for Sunday's two-minute silence.

The ban on public services was criticised by former prime minister Theresa May.

"Surely those men and women who gave down their lives for our freedom deserve better than this?" she said.

Britain already has the worst coronavirus death toll in Europe, and the government says it reluctantly imposed the restrictions to try to arrest a second wave of the disease heading in to winter.

General Nick Carter, chief of the defence staff, acknowledged the need for the curbs. But speaking to BBC television Sunday, he said some veterans might have found Remembrance Day a more "lonely" experience this year.