UK hopes for vaccine within 6 months 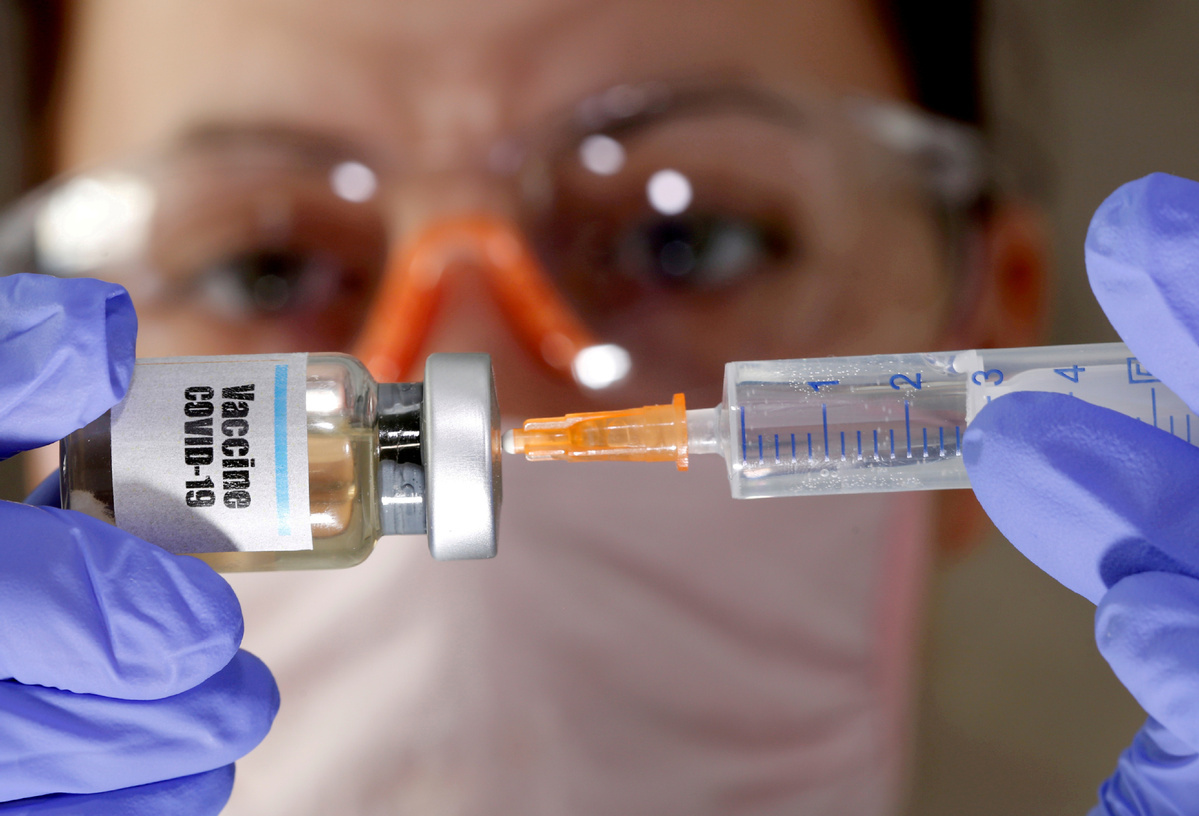 A woman holds a small bottle labeled with a "Vaccine COVID-19" sticker and a medical syringe in this illustration taken April 10, 2020. (Photo: Agencies)

With novel coronavirus infections surging in Europe and COVID-19 hospitalizations doubling every few days, a top scientific adviser to the British government has offered hope by saying vaccines should be available in the United Kingdom in the next three to six months.

Jeremy Farrar, a member of the government's Scientific Advisory Group for Emergencies and a former professor of tropical medicine at the University of Oxford, told Sky News: "I think in the first quarter of next year we will have vaccines-we'll have more than one vaccine."

Farrar, who is director of the research charity Wellcome Trust, said several good vaccine candidates are being developed and data about the trials for some of them will be available next month and December.

"Vaccines come in all different styles and approaches and Britain has got a portfolio of vaccines, through which more than one, I'm sure, will come through in the first quarter of next year," he said, while adding that better treatments will also improve the prognosis of people with the disease.

His comments echoed those of Jonathan Van-Tam, England's deputy chief medical officer, who said he expects to see vaccines in the UK at the start of 2021.

But people are being urged in the meantime to avoid the virus by wearing face coverings, regularly washing hands, and maintaining social distancing; steps that are being encouraged through a raft of new measures introduced and reintroduced around Europe in recent days.

In the UK, the latest restrictions on gatherings has led businesses to warn of "catastrophic consequences", including mass redundancies and company failures.

The British Chambers of Commerce, which represents 75,000 UK companies, told the BBC additional support will be needed beyond the 200-billion-pound ($260 billion) package the government has put in place.

Adam Marshall, the chamber's director-general wrote in an open letter to the government: "The situation for business grows graver by the day. Enhanced support must be given to those facing the indirect impacts of restrictions and closures-in supply chains, tourist destinations, and town and city centers."

The UK has recently introduced a three-tier system that directs the strictest restrictions at regions with the highest rates of virus transmission, although it has proven difficult to implement because of resistance from some parts of the country.

"We want to put together a package of measures that would actually work that will support people on the ground who are doing such great work and above all bear down on the virus," Jenrick told Sky News.

The Financial Times said the central government is likely to also offer disgruntled local governments greater control over the contact-tracing system, and offer the use of the armed forces.

But the Telegraph newspaper said Prime Minister Boris Johnson is understood to be ready to force restrictions upon reluctant regional governments if necessary.

London wants to elevate the alert level for Manchester from the middle level to the highest level, which would lead to pubs being ordered to close and people being told not to socialize with anyone from outside their household.

Wales, meanwhile, followed Northern Ireland's lead on Monday and ordered a two-week "fire break" lockdown that will start on Friday.

The Reuters news service said strict measures are also being introduced in Italy, where Prime Minister Giuseppe Conte has handed mayors the power to close public spaces overnight in an attempt to stop public gatherings.

The nation reported 11,705 new cases on Sunday, prompting Conte to describe the situation as "critical".

"The government is there but everyone must do their part," he said.

Betting shops have also been ordered to close and amateur sports events stopped.

Elsewhere in Europe, police in the Czech Republic fought pitched battles on Sunday with around 2,000 anti-mask protesters while Switzerland has made it mandatory to wear masks in all public settings. The nation has also banned gatherings of more than 15 people.

France, meanwhile, which reported a record-breaking 32,427 new novel coronavirus cases on Saturday is poised for additional measures and, in Germany, Chancellor Angela Merkel told people to stay at home as the nation reported 7,830 cases in a 24-hour period.