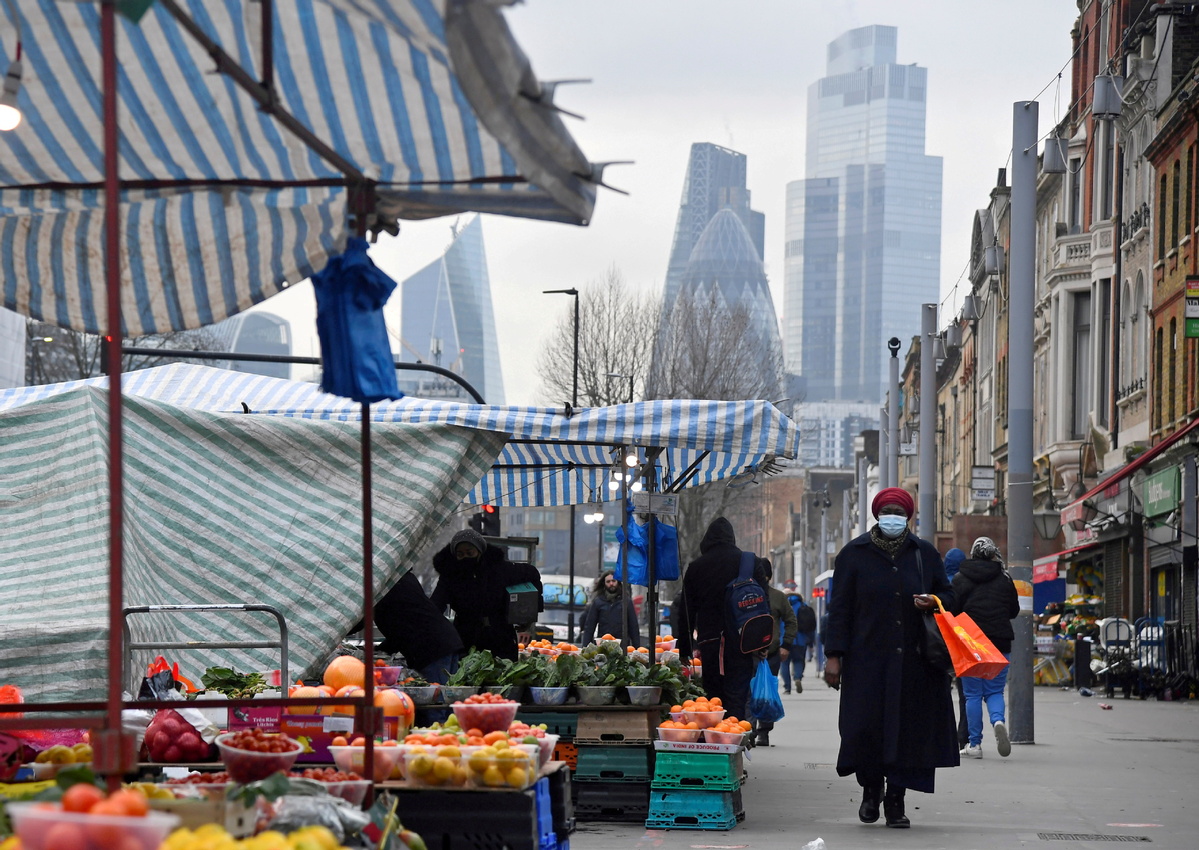 People shop at market stalls, with skyscrapers of the CIty of London financial district seen behind in London, Britain, January 15, 2021. (Photo: Agencies)

October's 4.2 percent of annual growth rate, up from the 3.1 percent rise recorded in the year to September, is more than double the Bank of England (BoE)'s 2 percent target for inflations.

Meanwhile, the CPI including owner occupiers' housing costs (CPIH) 12-month inflation rate rose by 3.8 percent in the 12 months to October 2021, up from 2.9 percent in the year to September, said the ONS.

The largest upward contribution to the CPIH 12-month inflation rate came from housing and household services, driven significantly by the price rises of electricity, gas and other fuels, said the ONS.

"Inflation rose steeply in October to its highest rate in nearly a decade. This was driven by increased household energy bills due to the price cap hike, a rise in the cost of second-hand cars and fuel as well as higher prices in restaurants and hotels," said Grant Fitzner, chief economist at the ONS.

"Costs of goods produced by factories and the price of raw materials have also risen substantially and are now at their highest rates for at least 10 years," Fitzner said.

Analysts said the surge of inflation rate suggested that the possibility of the central bank raising interest rates in December increased.

Paul Dales, an economist at the Capital Economics UK, an economic research consultancy based in London, said: "When coupled with yesterday's decent labour market release, the bigger-than-expected leap in CPI inflation in October makes an interest rate hike in December even more likely."

"That said, we still think the markets have gone too far by pricing in interest rates rising to 1.00-1.25 percent by the end of next year," Dales said.

Earlier this month, the BoE announced its decision to keep interest rates unchanged at 0.1 percent despite widespread speculation that it will raise rates to contain rising inflation.

The BoE made two emergency cuts of base rate from 0.75 percent to 0.1 percent to support businesses and households since the COVID-19 pandemic began.