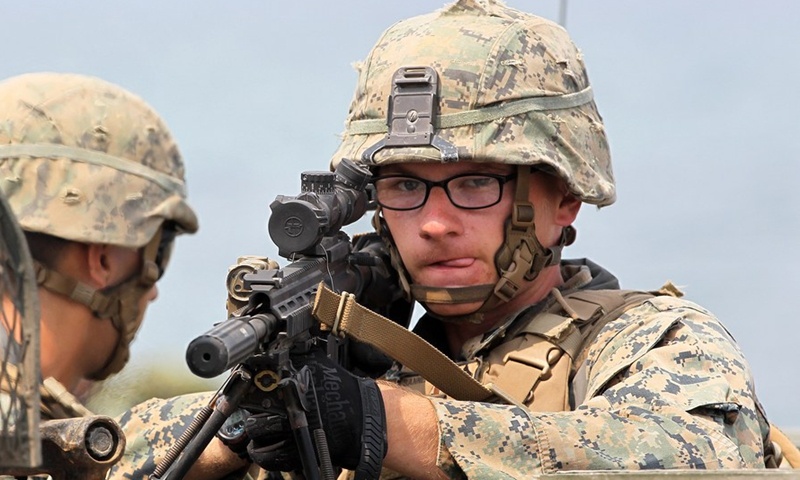 US soldiers participate in the Amphibious Landing training as part of the 2018 Balikatan Exercises between the Philippines and the United States in Zambales Province, the Philippines, on May 9, 2018. (File photo: Xinhua)

A British investigative journalist has published a new book with extensive details of US military's contamination of islands and ocean in the Pacific region.

The book Poisoning the Pacific, written by The Guardian journalist Jon Mitchell, was released Monday.

Based on more than 12,000 pages of US government documents and through interviews with local residents, military veterans and researchers, the book chronicles the US military's decades-long contamination of indigenous lands across the Pacific region with radioactive waste, nerve agents and chemical weapons like Agent Orange.

Among others, the book documents "the US Army disposing of 29 million kilograms of mustard agent and nerve agents, and 454 tons of radioactive waste" into the Pacific Ocean.

It also shows the US military's use of nerve agents, including sarin, which US government documents confirm were leaked into the environment while slated for destruction on Johnston Atoll near Hawaii.

"US authorities have repeatedly tried to cover up contamination through lies, disinformation and attacks on reporters...I have experienced this pressure firsthand," Mitchell told The Guardian.

"Colleagues warned me against continuing my investigations. What particularly motivated me to keep filing FOIAs (the US Freedom of Information Act) and digging for evidence was the very real impact my research was having for veterans exposed to Agent Orange on Okinawa," he said.

According to The Guardian report, US Air Force master sergeant named Leroy Foster, soon after he arrived in 1968 at the Anderson Air Force Base in Guam, a US island territory in the Pacific, was ordered to mix "diesel fuel with Agent Orange" and then spraying "it by truck all over the base to kill the jungle overgrowth".

Foster suffered serious skin complaints afterwards and eventually fell sick with Parkinson's and ischemic heart disease before he died in 2018. His daughter had cancer as a teenager, and his grandchild was born with 12 fingers, 12 toes, and a heart murmur, according to the report.

"My reporting has helped these sick men and women to receive compensation from the US government. Investigative journalism is ultimately a job that ought to help people suffering from mistreatment to receive the justice they deserve," Mitchell said.

On Amazon's UK website, Mitchell's book can be seen only available with the Kindle digital edition but the hardcover copy is "currently unavailable".

"We don't know when or if this item will be back in stock," reads the website.

Among the reviews published by Amazon, David Vine, professor of political anthropology at American University in Washington, also author of Base Nation: How US Military Bases Abroad Harm America, said, "Poisoning the Pacific is an unprecedented, comprehensive expose of the human and environmental damage caused by nearly a century of US warmaking, weapons testing, training, and daily military activity in East Asia, the United States, and its colonies/territories."

"Jon Mitchell's exhaustive research provides a tremendous resource for the thousands, perhaps millions, of victims harmed by a vast array of chemical, biological, and nuclear poisons, as well as for all who believe we must expose and repair the harm inflicted (and often covered up) in the name of supposed security," said Vine.