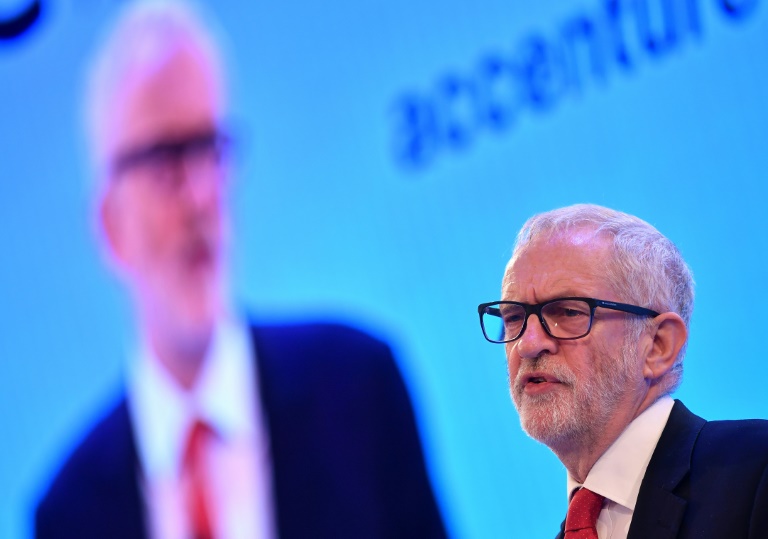 Party leader Jeremy Corbyn called it "the most radical and ambitious plan to transform our country in decades" and a "once-in-a-generation chance of real change".

Key pledges included the nationalisation of the rail, water, energy and broadband networks, in addition to huge investment in public services, corporate reforms and the introduction of a 32-hour working week.

Labour has promised a "green industrial revolution" to tackle what Corbyn called "the climate emergency", by focusing new jobs and industries on efforts to tackle global warming.

But the most immediate problem is Brexit, with Britain due to leave the European Union on January 31 -- just weeks after the December 12 poll.

Labour says that within six months of taking office, it will strike a new exit deal with the European Union and hold a second referendum on Britain's membership.

"The British people have the final say. Our government will carry it out, whatever the result of that vote is," Corbyn told an audience of party activists and media.

But Corbyn is hoping to galvanise voters like he did in the last election in 2017 by focusing on tackling inequality after nine years of Conservative austerity measures.

At the manifesto launch in Birmingham, central England, he said the programme was "full of popular policies that the political establishment has blocked for a generation".

He repeated the attacks on the rich and powerful that have been a feature of Labour's campaign so far, saying: "It's time for real change."

The manifesto includes big-ticket promises such as a five percent pay rise for public sector workers and the abolition of university tuition fees.

Corbyn said Labour would bring back into public ownership the "obvious monopolies", which includes parts of telecoms giant BT to provide free broadband for all.

The party envisages a huge increase in borrowing to fund investment, which the Institute for Fiscal Studies (IFS) think-tank had previously estimated at around £55 billion ($71 billion, 64 billion euros) a year.

Labour has also promised tax rises for the top five percent of earners, a rise in corporation tax, and levies on oil companies and multinationals.

Johnson's Conservatives were quick to condemn the plans for being "a reckless spending spree which would take a sledgehammer to the British economy".

The head of the British Chambers of Commerce said firms would welcome plans to upgrade infrastructure, as well as Labour's open approach to migration.

Corbyn said he expected hostility from business groups, political rivals and a predominantly right-wing media because "the system is working just fine for them".

"It's rigged in their favour -- but it's not working for you," he told the audience.

Labour wants to put workers on company boards and introduce pay ratios within firms, invest in transport and build 100,000 social homes a year.

Johnson has yet to unveil his own manifesto, which is expected at the weekend, but has also promised big increases in public spending -- although not on the same scale as Labour.

Ahead of Labour's launch he announced a cut in salary taxes and also vowed a huge house-building programme.

But after Britain's EU exit was delayed three times under him and his predecessor, Johnson's focus in the election is on delivering the next Brexit deadline of January 31.

Corbyn said his plan for a second EU referendum was a responsible approach but Johnson said re-running the divisive 2016 vote would only offer more delays.

"It's only because we will get Brexit done and end the uncertainty that we can afford to cut taxes for hard-working taxpayers," he said.

"The worst October for the public finances for five years won't prevent whoever wins the election embarking on a fiscal splurge," said Andrew Wishart, economist at research group Capital Economics.