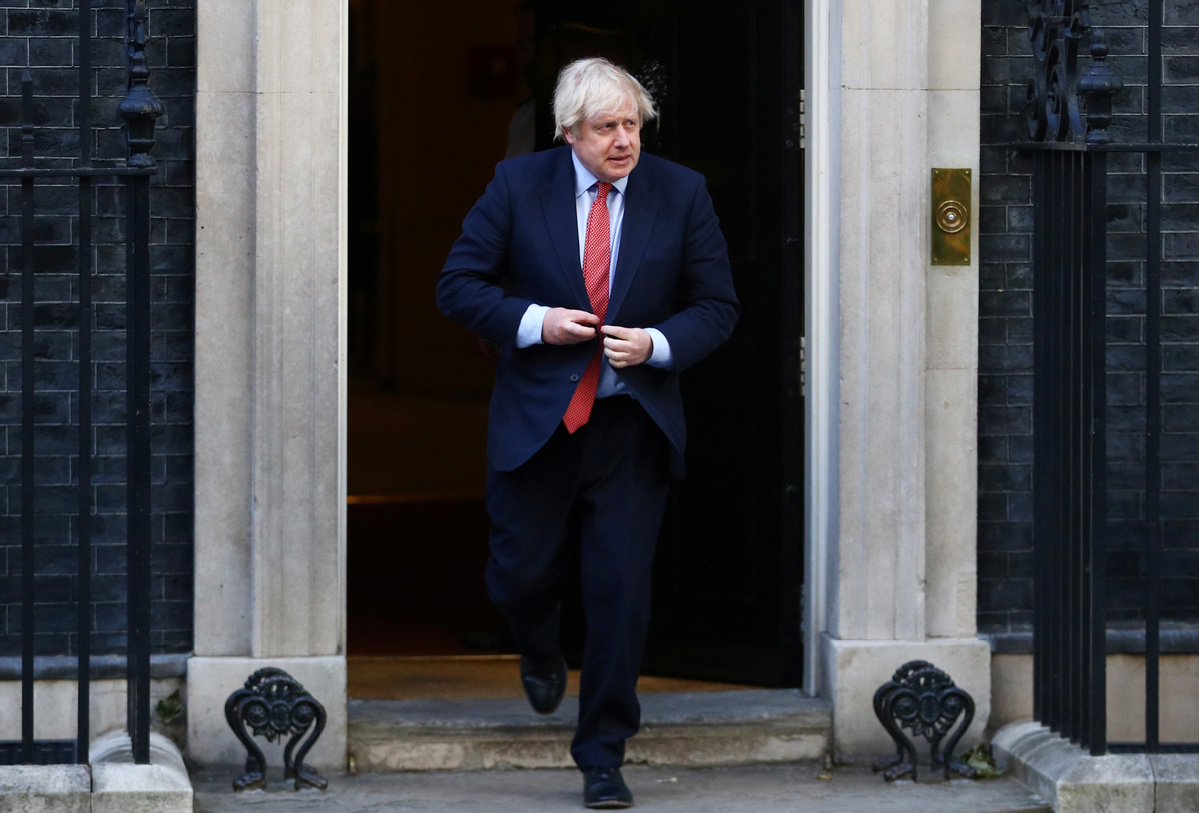 Britain's Prime Minister Boris Johnson outside 10 Downing Street during the last day of the Clap for our Carers campaign in support of the NHS, following the outbreak of the coronavirus disease (COVID-19), in London, Britain, May 28, 2020. [Photo/Agencies]

England and Scotland launched test and trace systems on Thursday to help monitor and contain novel coronavirus infections as the United Kingdom began to loosen lockdown.

Northern Ireland and Wales will get similar systems in the coming days.

At the UK's daily news briefing on Thursday afternoon, Prime Minister Boris Johnson said 25,000"contact tracers" will locate and warn people who have interacted with an infected person.

Those contacted by phone, text, or email will be told to self-isolate for 14 days and watch out for symptoms.

The system will help identify localized outbreaks after lockdowns are eased, so specific responses can be taken.

"We will put on the brakes as required," Johnson said.

He announced a further 377 deaths, taking the national total to 37,837 but said the situation is under control to the extent that he could order a further relaxation of the lockdown on June 1, including the reopening of many schools, outdoor retailers and car dealerships.

Up to six people will be able to meet outdoors, including in private gardens, as long as those from separate homes observe social distancing rules, he said.

"The changes we are making are limited and cautious… Clearly, what we are proposing is still just a fraction of the social interaction each of us would normally enjoy," he said.

Participation in the test and trace system will be voluntary and some politicians, including around 40 lawmakers from the ruling Conservative Party, have said people's willingness to be involved may be impacted by a scandal involving Johnson's chief aide, Dominic Cummings, who escaped sanction after driving 420 kilometers at the height of the lockdown to access childcare.

Keir Starmer, leader of the opposition Labour Party, wrote in Thursday's Daily Mirror newspaper that it will have "undermined the very public health advice that is necessary to keep us all safe, just to keep one powerful aide in his job".

Penny Mordaunt, who as paymaster general is a member of the Cabinet, told her constituents the incident had "undermined key public health messages".

The scandal has highlighted how the lockdown relies on people's compliance.

But a lack of enforcement has not been a problem in the Isle of Man, The Guardian newspaper alleged, where it said the authorities have been "authoritarian" in enforcing the lockdown.

The self-governing British Crown dependency in the Irish Sea with a population of 85,000 has cautioned at least 700 islanders, arrested 78, and jailed 26.

It is an edging back to normal that has not been mirrored at the UK's airports where, according to a Home Office report, the number of people arriving by air, which fell from 7.1 million in January to 3.8 million in March, plummeted in April, to only 112,300. Most arrivals were returning British expats.

Finland and Italy are working on similar programs.

But the dire economic situation in Spain was made worse on Thursday when Japanese carmaker Nissan said it was closing its Barcelona plant, with the loss of 2,800 jobs.

Meanwhile, in France, lawmakers have approved a test and trace app that will be rolled out next week.

Switzerland has further eased its lockdown, allowing groups of up to 30 people to meet.

The nation's health minister, Alain Berset, said: "We need to stay humble, but I think we have the situation under control."