UK lawmakers queue to vote as Parliament adjusts to COVID-19 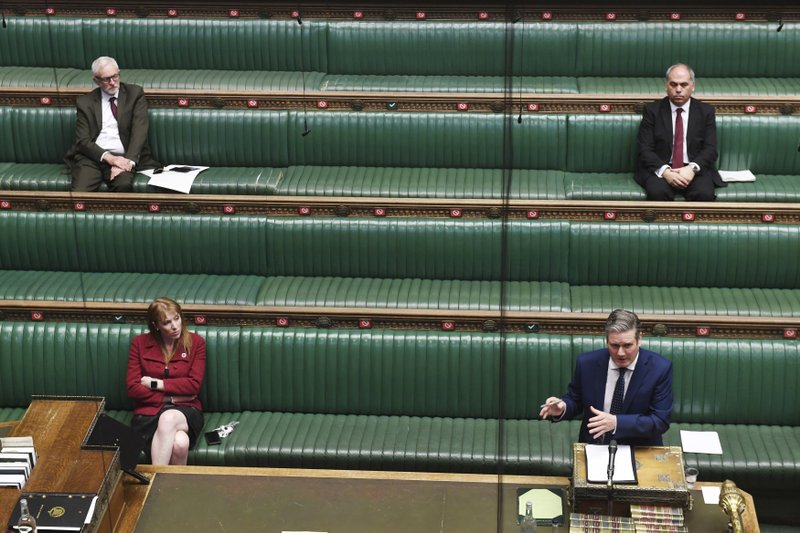 In this handout photo provided by the UK Parliament, Britain's Labour leader Keir Starmer speaks during Prime Minister's Questions, as members of Parliament observe social distancing due to the coronavirus, in the House of Commons, London, Wednesday, April 29, 2020. (Photo: AP)

Prime Minister Boris Johnson’s Conservative government faced a rebellion from some of its own legislators on Tuesday after it summoned Members of Parliament back to London and scrapped a remote-voting system used during a nationwide coronavirus lockdown.

Like millions of other Britons, the country’s 650 lawmakers have largely been working from home during the outbreak. As normal life gradually resumes, the government decreed it was time they came back to the office.

Jacob Rees-Mogg, the government’s leader of the House, said lawmakers should be setting an example by showing up in person as the country gets back to work.

“We need to have a proper full-blooded democracy … and that’s what we are getting,” he told lawmakers.

But some legislators said ending the “virtual Parliament” before the outbreak was over would turn those who must stay home because of age, illness or family issues into second-class lawmakers.

“I feel both discriminated against and disenfranchised,” said opposition Labour Party lawmaker Margaret Hodge, who like many over-70s, is considered especially vulnerable to the virus and has been urged to stay at home.

“We should be holding the government to account. We can’t if we don’t have the right to vote,” she said.

After Britain went into lockdown in late March, Parliament adopted a historic “hybrid” way of working. Only 50 lawmakers at a time were allowed into the House of Commons, while screens were erected around the chamber so others could join debates over Zoom. Votes were held electronically for the first time in centuries of parliamentary history.

But when the House resumed work Tuesday after an 11-day spring recess, the government called time on the brief experiment with virtual voting.

With its 80-strong majority in the chamber, the government passed a motion decreeing that henceforth, all votes will have to be held in person.

In the coronavirus era, that’s an unwieldy process. House of Commons Speaker Lindsay Hoyle ruled that the traditional method of voting, in which lawmakers crowd into separate “yes” or “no” lobbies, was unsafe because it would be be impossible to maintain social distancing.

To vote on the government’s motion, lawmakers therefore had to stand in a kilometer-long (half-mile-long) queue that snaked along corridors, through a vaulted hall and around a courtyard. One by one and 2 meters apart (6 1/2 feet), they trooped into the Commons chamber to register their votes — a process that took 45 minutes in all.

Some critics dubbed the unwieldy method a “conga-line Parliament”; others compared it to children filing into class on the first day of school.

The government’s opponents argue that it’s too early and too risky to return to Parliament.

Britain has had Europe’s deadliest coronavirus outbreak, with more than 39,000 confirmed deaths. Prime Minister Boris Johnson’s Conservative government is gradually easing the nationwide lockdown, but authorities warn that progress is fragile, and too swift a relaxation could trigger a second wave of infections.

But Parliamentary authorities have major concerns. With its crammed chamber and warren of corridors, Parliament was fertile soil for the virus when the outbreak began. Multiple staff and lawmakers fell ill, including Johnson, who ended up in intensive care.

“Asking people to travel from all corners of the U.K. to go to the global hotspot that is London ... is gambling with the virus,” said Scottish National Party lawmaker Angus MacNeil, whose Hebridean island constituency is almost as far from London as it’s possible to get in the U.K.

The Commons’ move to end its digital experiment came as Parliament’s upper chamber, the House of Lords, put the finishing touches to a system that will allow its members, whose average age is 70, to vote with their phones.

Faced with mounting opposition, the government offered a partial compromise. Rees-Mogg said that lawmakers who have to stay home for health reasons would be able to ask questions and participate in debates remotely — but not vote.

Conservative lawmaker Robert Halfon, who has cerebral palsy, said the authorities were being “harsh and unbending.”

“The MPs who genuinely cannot come in, our democratic rights are being snipped away and we’re being turned into parliamentary eunuchs,” he said.

Halfon likened the government’s attitude to that of Brazilian President Jair Bolsonaro “that COVID is just the sniffles and, if you can’t come in, tough luck, we don’t care. And that to me is entirely wrong.”