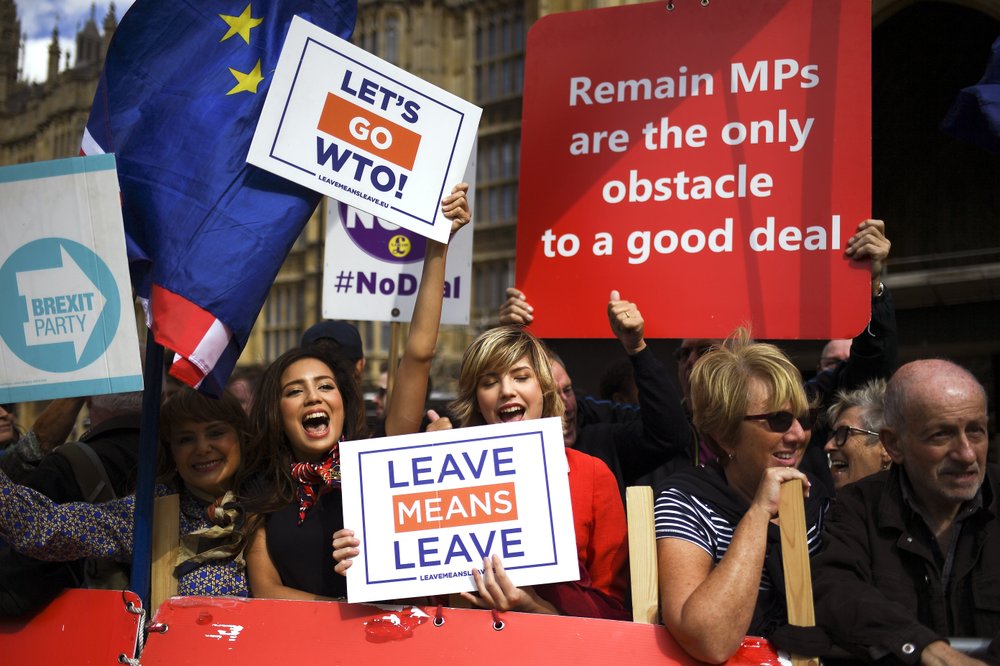 Pro-Brexit supporters outside the Houses of Parliament, in London, Wednesday, Sept. 4, 2019. (Photo: AP)

LONDON, Sept. 4 (Xinhua) -- British lawmakers on Wednesday rejected a motion tabled by Prime Minister Boris Johnson calling for a general election on Oct. 15, dealing another blow to the prime minister, who vowed to take his country out of the European Union on Oct. 31 with or without a deal.

The lawmakers voted 298-56 on the motion, after the House of Commons passed a Brexit delay bill to prevent a no-deal departure from the European Union.

Johnson failed to get sufficient two-thirds majority House of Commons required by law for an early general election, which is not due until 2022. Johnson would have needed 434 votes to succeed in his bid to dissolve parliament.

After the vote result was announced, Johnson said that Labour Party leader Jeremy Corbyn is the first leader of the opposition in the country to "refuse the invitation to an election".

Johnson said that he had "an obvious conclusion that he (Corbyn) thinks he will not win" in the snap election if it is held next month as he proposed.

In return, Corbyn accused the prime minister of "playing a disingenuous game" to force a no-deal Brexit. He said his party would back an election after the bill had been passed, but not before.

Corbyn told MPs that Johnson's offer of an election was "a bit like an offer of an apple to Snow White from the Wicked Queen... offering the poison of a no deal".

"Today parliament has voted to stop, to scupper any serious negotiations," he told MPs.

Johnson said the purpose of the no-deal bill was to take away the right of Britain to determine how long it wants to stay in the EU, and to hand the decision to Brussels.

Indicating why he wants a general election, Johnson said it would enable the country to now decide whether the leader of the opposition, Labour's Jeremy Corbyn, or he goes to Brussels.

"I think it's very sad that MP's have voted like this, I do, I think It's a great dereliction of their duty," Johnson added.