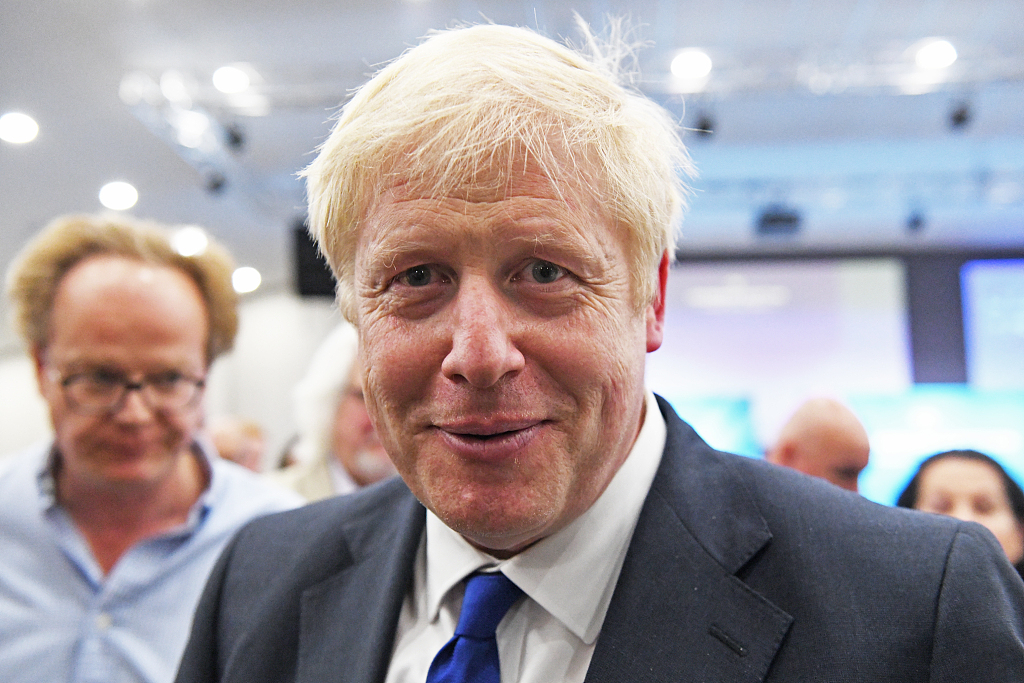 Conservative party leadership contender Boris Johnson leaves after a Tory leadership hustings at the All Nations Centre in Cardiff on July 6, 2019. (Photo: VCG)

British lawmakers from both the ruling Conservatives and opposition Labour on Sunday said they were looking at ways to prevent the country's next prime minister pursuing a no-deal Brexit against parliament's wishes.

Boris Johnson, the frontrunner to succeed Theresa May as prime minister this month, has said Britain must leave the European Union on October 31 with or without a deal.

He may find his hands tied, however, as the Conservatives do not have a majority in parliament and most lawmakers in parliament oppose a no-deal Brexit.

May's Brexit deal was rejected three times by parliament due to rebellions within her own party and opposition to it from Northern Ireland's Democratic Unionist Party (DUP), who prop up the Conservative government.

Labour's trade spokesman Barry Gardiner said his party would call a no-confidence vote in the government when it believed enough Conservatives would support it.

Several Conservatives have said they would consider voting to try to bring down a government which was pursuing a 'no deal.' Other Conservatives said on Sunday they were looking at ways they could try and block a no-deal exit through legislation.

"We will call a no-confidence vote when we believe that those Conservative members of parliament who have said that they would support a no confidence motion in the government in order to stop a no deal are likely to support it," Gardiner told Sky News. Asked if Labour was having conversations with those lawmakers, Gardiner said, "Of course".

Conservative lawmaker Sam Gyimah, who ran for the party's leadership but withdrew before voting began, told Sky News that voting against the government was the "nuclear option" and he did not intend to do so. Gyimah, who supports holding a second referendum on Brexit, said there were 30 or more Conservative lawmakers who would back "legislative options" to try to block a no-deal Brexit.

Justice minister David Gauke told the BBC he believed it was likely parliament would find a way to stop Britain leaving without a deal and a "sizeable number" of Conservatives who opposed a no deal were discussing their options.

Johnson has not ruled out "proroguing" parliament, effectively closing it down until Britain's EU exit date has passed at the end of October to prevent lawmakers trying to intervene.

Gyimah said lawmakers would seek to stop the new prime minister trying to shut down parliament. He said they are also looking to "create options ... so that no deal isn't the only option we face on October 31."

"There are a number of legislative mechanisms being looked at the moment," he said, adding that they would be "sensible and pragmatic." The Sunday Times reported former Conservative attorney general Dominic Grieve, who has been involved in previous attempts by lawmakers to prevent a no deal, will on Monday seek to amend a piece of legislation related to Northern Ireland.

He would try and force the government to make a statement in parliament in October to update lawmakers on its efforts to restore Northern Ireland's government, making it legally difficult to suspend parliament, the newspaper reported.

Grieve, who has said he would vote against a Conservative government in a confidence vote if necessary to try and prevent a no deal, told BBC Radio: "We are going to have in the course of the next twenty four hours an important bill on Northern Ireland ... That's a bill which is perfectly legitimate place to start looking at how one might make sure how a Brexit deal is fully debated before it takes place."