WORLD UK leader fights back against critics amid Brexit upheaval

UK leader fights back against critics amid Brexit upheaval 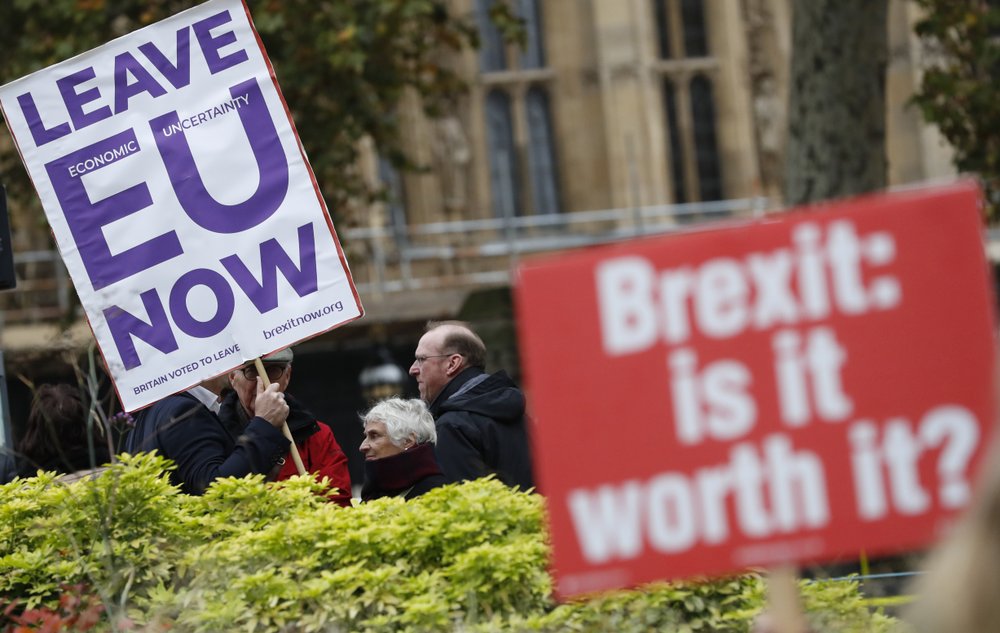 Pro and anti Brexit protesters hold placards as they vie for media attention near Parliament in London, Friday, Nov. 16, 2018. Britain's Prime Minister May still faces the threat of a no-confidence vote, after several Conservative Party lawmakers said they had written letters asking for one. (Photo: AP)

British Prime Minister Theresa May fought back against critics of her Brexit deal Saturday, telling opponents from within her party their alternative plans for Britain’s departure from the European Union wouldn’t work.

May is battling to win over rebels in her Conservative Party and and to preserve her position as prime minister after a grueling week in which party members plotted to oust her and two Cabinet ministers quit within hours of her government striking the long-sought divorce agreement with the EU.

In a public relations offensive, May revealed in a Daily Mail interview how her husband supported her during “a pretty heavy couple of days.”

Calling her husband, Philip, her “rock,” May said that when the Conservative revolt erupted Wednesday, the first thing he did was pour her a whisky.

She also laid into political opponents, saying their ideas for resolving the biggest stumbling block in EU-UK negotiations — avoiding a hard border between Northern Ireland and the Republic of Ireland after Brexit — wouldn’t resolve the problem.

“People say, ‘If you could only just do something slightly different, have a Norway model or a Canada model, this backstop issue would go away.’ It would not. That issue is still going to be there,” May said in the interview , published Saturday.

“Some politicians get so embroiled in the intricacies of their argument they forget it is not about this theory or that theory, or does it make me look good,” she added.

While May appeared to have survived the week, her headaches are far from over. Disaffected “Brexiteers” think they have the numbers required to trigger a challenge to her leadership within days.

They are aiming for 48 letters of no confidence, the number needed for a vote under Conservative Party rules. So far, more than 20 lawmakers have publicly said they submitted such letters.

One of them, Mark Francois, complained that May’s draft deal would leave Britain with the worst outcome — “half in and half out” of the EU. He said it would never be approved in Parliament, where May’s Conservatives do not have a majority.

Like Francois, many pro-Brexit Conservatives are pushing for a clean break with the EU and argue that the close trade ties between the UK and the EU called for in the deal would leave Britain a vassal state.

As it stands, the draft agreement sees Britain leaving the EU as planned on March 29 but remaining inside the bloc’s single market and bound by its rules until the end of December 2020.

It also commits the two sides to the contentious “backstop” solution, which would keep the UK in a customs arrangement with the EU as a guarantee the Irish border remained free of customs checkpoints.

British media reported that several pro-Brexit senior Conservatives, including House of Commons leader Andrea Leadsom, were trying to persuade May to renegotiate the divorce deal in a way they find more acceptable.

Leadsom told Sky News Saturday “there is still more to be done” to get “the best possible deal for the UK” before the draft withdrawal agreement is signed off on Nov. 25 in Brussels. She didn’t elaborate.

The deal also requires approval from Britain’s Parliament before the UK leaves the bloc.