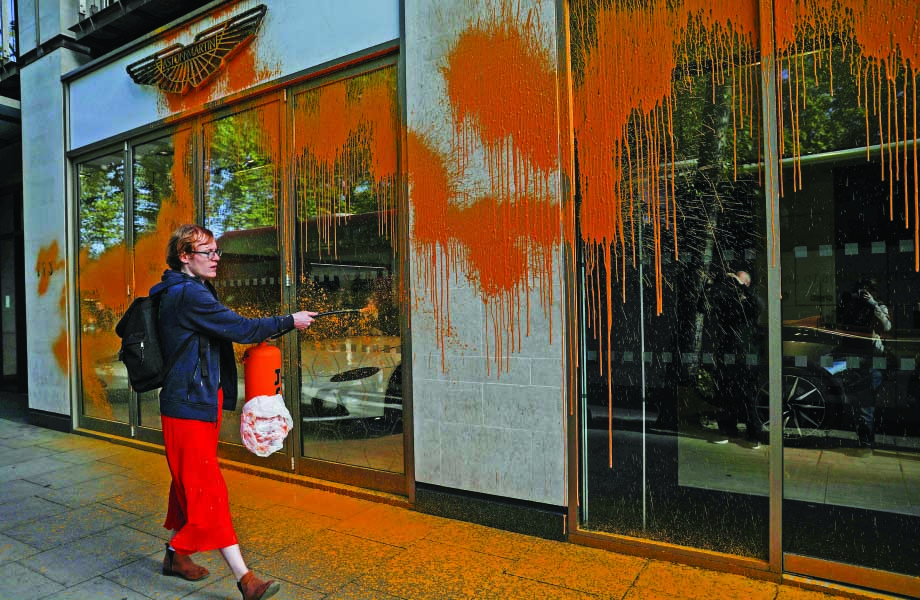 A protester from the Just Stop Oil environmental group sprays orange paint on the window of an Aston Martin car showroom in central London on Sunday. (Photo: AFP)

Britain's home secretary has unveiled plans to crack down on climate protesters, pledging to give police more powers to stop demonstrators holding the public "to ransom".

Suella Braverman said the new Public Order Bill that will be put to Parliament this week must be enacted and allow police to end protests that threaten or cause "serious disruption or a serious adverse impact on public safety".

The plan would allow ministers to apply for injunctions in the "public interest" to protect access to essential goods, services, and key infrastructure, reported PA Media.

Just Stop Oil and Extinction Rebellion activists have staged various protests and demonstrations in London and across the country in recent months causing disruption to commuters and traffic.

Braverman said it is "high time "lawmakers backed the new legislation that will bring jail sentences or fines for protesters accused of "locking-on "to people, objects or buildings, which has been the preferred tactic for the climate demonstrators. She described one incident that saw emergency fire crews unable to drive through a central London street junction.

Official figures show that more than 350 Just Stop Oil protesters have been arrested in London since the start of this month.

Organized protests in London and across the country on Saturday included clashes with the public, and milk being poured on the floor and shelves of supermarkets, including Waitrose and Marks and Spencers, and in upmarket shops Harrods and Fortnum and Mason. Last week, two Just Stop Oil activists threw tomato soup over Van Gogh's masterpiece Sunflowers at the National Gallery in central London.

Braverman said: "I will not bend to protesters attempting to hold the British public to ransom.

"Preventing our emergency services from reaching those who desperately need them is indefensible, hideously selfish, and in no way in the public interest.

"This serious and dangerous disruption, let alone the vandalism, is not a freedom of expression, nor a human right. It must stop."

The climate protest groups are calling for the government to halt all new oil and gas extraction licenses and the activists said they would not be intimidated by law changes aimed at "silencing non-violent people", reported the BBC.

Braverman said: "The police need strengthened and tougher powers to match the rise in self-defeating protest tactics and that's what the Public Order Bill will do.

"It's high time Parliament got behind it and put the law-abiding majority first."

The Guardian reported that the government is also seeking to use the new laws to introduce minimum service levels during strikes by transport workers after months of industrial action by railway workers in disputes over pay, jobs, and conditions.