Britain's government watchdog says there's still a "significant amount" of work to do to make sure the country has an adequate supply of licensed drugs in case of a no-deal Brexit. 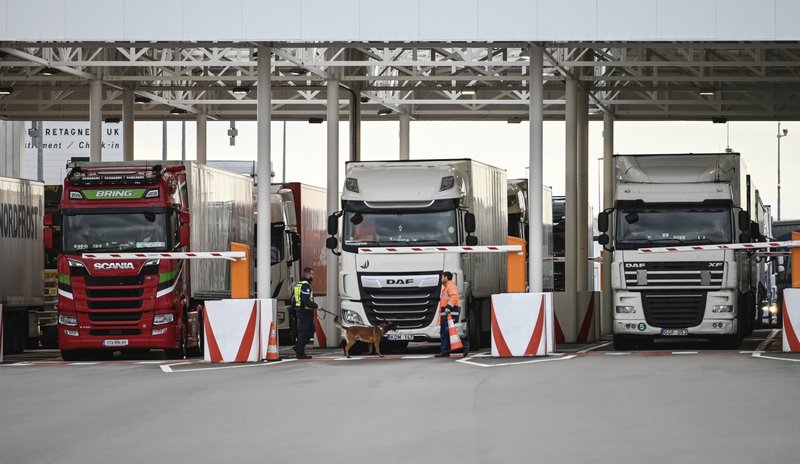 In this Tuesday, Sept. 17, 2019 file photo, an employee of Eurotunnel and his dog check trucks on their way to Britain during a day of test in case of no deal Brexit, at the exit of the Channel tunnel in Calais, northern France. (Photo: AP)

In a report issued Friday, Britain's National Audit Office said additional shipping capacity chartered by the U.K. for sending goods across the English Channel might not be operational until the end of November — one month after the Oct. 31 deadline for Britain to leave the European Union. Of the more than 12,300 medicines licensed in the U.K., about 7,000 arrive from or via the EU, mostly across the Channel.

Meg Hillier, who chairs a committee overseeing the audit office, called the findings "deeply concerning." She said she had seen "countless examples" of the British government missing deadlines, but that this one was particularly striking.

"If the government gets this wrong, it could have the gravest of consequences," she said.

Alan Boyd of the Academy of Medical Royal Colleges said people with epilepsy were a particular concern in the event of any drug shortages, noting that "one seizure can have a life-changing impact." Some surveys have also suggested there could be shortages of drugs to treat breast cancer, diabetes and heart failure.

According to the British government's "reasonable worst-case" scenario , the flow of goods could be cut by half on Day One of a no-deal Brexit and could take a year to recover. It said time was "extremely limited" if the shipping issues were to be resolved by the end of October.

"One thing is clear about a no-deal Brexit and that is that no amount of preparation can fully eradicate the risks it presents to patient safety," said Donal O'Donoghue of the Royal College of Physicians . "It is impossible for me and my colleagues to reassure patients that their health and care won't be negatively impacted by the U.K. leaving the EU without a deal."

Steve Bates, CEO of U.K.' s Bioindustry Association , said that unlike the last Brexit deadline — March 31 — the government has given companies much less information about alternative routes in case a no-deal Brexit results in jammed ports.

"Last time, we knew which ferry services had been commissioned on alternative routes with pharmaceutical companies encouraged to book space to ship their products," he told reporters last week. "But the same approach has not been adopted this time."

The audit report also said there was "incomplete information" about the levels of medicine stockpiling but that levels were increasingly daily. As of Sept. 20, suppliers reported that 72% of medicines had a six-week stockpile.

"In the event of a no-deal exit, the department (of health) would be working in a highly uncertain environment and operating all the elements of its plan would be a hugely demanding task," the watchdog wrote.

Boyd said drug shortages already happen every month even without Brexit and the department of health typically issues a list of affected medicines and in some cases, suggests possible alternatives. He said the group was also concerned that a no-deal Brexit would mean that Britain would be kicked out of a Europe-wide program to identify counterfeit medicines.

"The department of health will put its own system in place, but that will likely take a few years before it's up and running," he said.