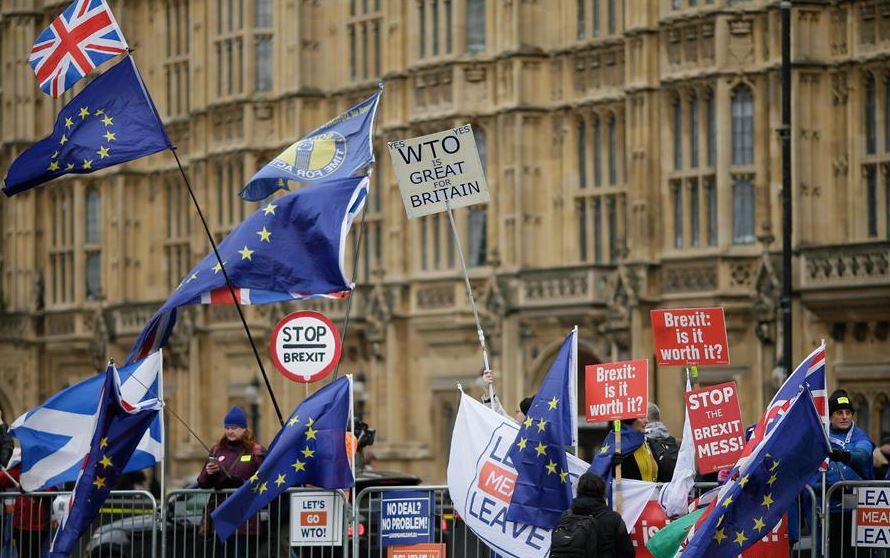 Pro-Brexit and anti-Brexit protesters hold flags and placards outside the Parliament, in London, Britain, on Jan. 14, 2019. (Photo: Xinhua)

LONDON, Jan. 15 (Xinhua) -- British MPs have been warned again to rule out the possibility of a no-deal Brexit on the eve of Parliament's vote on the Brexit deal due late on Tuesday, with British media widely predicting a defeat for the deal.

"As MPs prepare to vote on the government's Brexit deal, we urge them to remember they hold the future of the British automotive industry -- and the hundreds and thousands of jobs it supports -- in their hands," Mike Hawes, chief executive of the Society of Motor Manufacturers and Traders (SMMT), said in a statement on Tuesday.

"The just-in-time nature of automotive means the impact of 'no deal' will be felt, not in months or weeks, but hours," Hawes said, rejecting a managed no-deal as a "fantasy".

"We would face immediate delivery shortages, disruption, additional costs and uncertainty. Both government and parliament have a responsibility to take no-deal off the table or risk destroying this vital UK industry," Hawes said.

The vote in Parliament will finally come after the government postponed it in December amid fears that Prime Minister Theresa May's Brexit deal could suffer a crushing defeat. May has warned that the country would be in "uncharted" territory if MPs reject the deal. However, opposition MPs and politicians from her own Conservative Party have threatened to oppose the deal, which makes a no-deal Brexit more likely than ever.

A research paper published by the University of Bristol has warned that UK companies, already suffering from the sting of the Brexit impact, could see their value decrease further in the event of a no-deal Brexit.

The impact of the Brexit referendum reduced the value of UK companies by an average 16 percent, with those domestically-focused being hit the hardest, according to a new analysis published by the university on Monday.

Researchers used stock market data for 297 UK firms and bookmakers' Brexit odds during the referendum campaign to estimate the direct impact of political uncertainty related to Brexit on all major British companies.

Piotr Korczak, reader in finance at the School of Economics, Finance and Management at the University of Bristol, said "The referendum result started a period of unprecedented political uncertainty: it is difficult for companies to plan, investment is put on hold, and consumers cut spending. Ultimately the economy slows down while everyone waits to see what will happen.

"We would expect to see the same trends if there's a no-deal Brexit. This prolonged uncertainty is likely to see the value of UK companies decrease even further," Korczak said, adding that "most affected are likely to be financial firms and consumer-facing sectors operating mainly in the domestic market. Firms with international operations should be less affected."

Experts have also warned that a no-deal Brexit will cause further uncertainty and, ultimately, may lead to companies moving their business activities overseas to ensure stability.

The latest survey published by the Confederation of British Industry (CBI) and the accountancy firm PwC on Monday predicted overall business volumes of financial services to fall during the first quarter of 2019.

Rain Newton-Smith, CBI's chief economist, said: "A combination of macroeconomic and Brexit uncertainty, regulatory compliance and global market volatility are taking a toll on the UK's financial services sector. Financial services are a bellwether for the wider economy. The persistent weakness in optimism and the deterioration in expectations sound a warning for the outlook."

Under the current Brexit deal, nothing would change when Britain ends its EU membership on March 29, 2019, with a 21-month transition period aimed at giving Brussels and London more time to work out a permanent trading relationship. However, if a no-deal scenario happens, there will be a clean cut from the EU and both will trade on World Trade Organization (WTO) terms.