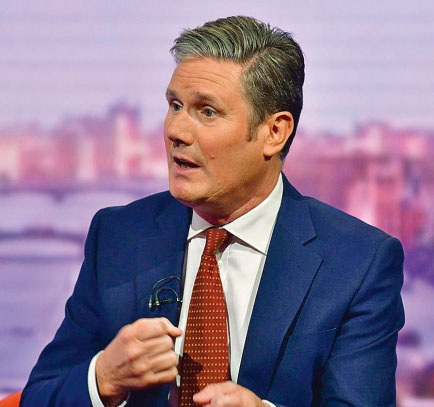 Keir Starmer has emerged as an early frontrunner to be the new leader of the Labour Party after Jeremy Corbyn said he would step down following the party's general election defeat.

In the survey of 1,059 Labour Party members, 31 percent put the shadow Brexit secretary Starmer as their first-choice candidate, while 20 percent backed the shadow business secretary, Rebecca Long Bailey as their favorite.

Backbencher Jess Phillips, the chair of the Women's Parliamentary Labour Party, was the third most popular choice among members, who were surveyed between Dec 20 and 30.

The poll by YouGov for the Party Members Project suggested Starmer, a centrist candidate, was the first choice in all regions of the United Kingdom, age groups and social classes, reported the Guardian newspaper.

The survey also suggested that he would comfortably win a final run-off with Long Bailey, taking 61 percent of the vote.

Starmer is yet to formally launch his campaign but is expected to do so in the next few weeks, as the new leader to replace Corbyn will be elected in March.

The poll contradicts suggestions that the party might opt for a left-wing leader from outside London, not associated with the anti-Brexit cause, in order to appeal to the Leave-voting Northern and Midlands seats lost to Conservatives in December's election.

Tim Bale, a professor at Queen Mary University of London, who jointly ran the poll with the University of Sussex, said the results suggest the winner is unlikely to come from the left of the party.

"This is not shaping up to be a 2015-style Labour leadership contest," said Bale. "Unless potential candidates drop out before the start of voting, it may take a few rounds to decide the winner this time around.

"But it doesn't look at the moment as if the winner will come from the left of the party. Right now anyway, Keir Starmer looks to be heading for a fairly emphatic victory," he said.

So far only the shadow foreign secretary, Emily Thornberry, and the shadow treasury minister, Clive Lewis, have officially said they want to run to be the next Labour leader.

The former Labour minister and Home Affairs select committee chair, Yvette Cooper, is thought to be considering whether she will run for the leadership for a second time, while Phillips, who represents Birmingham Yardley, and the Wigan MP, Lisa Nandy, are also expected to stand.

The party chairman and Corbyn ally Ian Lavery－who criticized the party's performance for their muddled stance on Brexit－might also run. Lavery, the most left-wing candidate, is a former National Union of Mineworkers chair who supports leaving the European Union.

In the poll, Phillips received 11 percent and Lewis and Cooper were the first choice for 7 percent of surveyed members. Thornberry was on 6 percent and Nandy was on 5 percent.