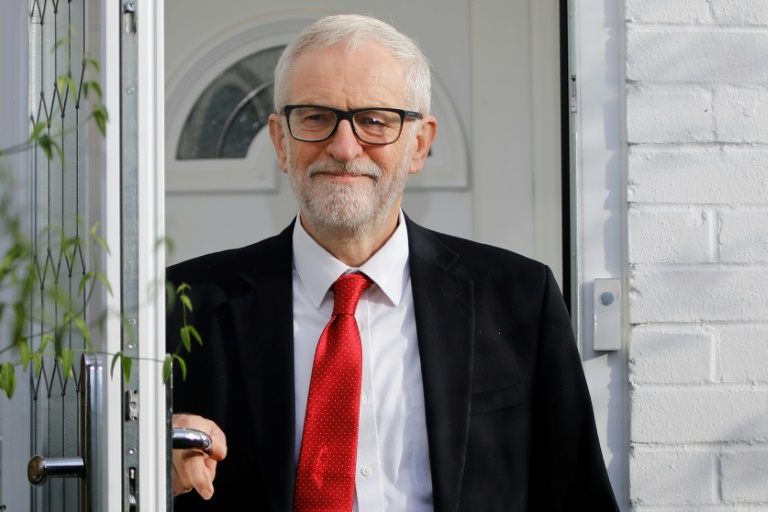 Corbyn defended his far-left campaign platform and gave no clear indication of when he might step down (Photo: AFP)

Britain's main opposition leader Jeremy Corbyn apologised Sunday for waging a disastrous campaign that handed Prime Minister Boris Johnson a mandate to take the UK out of the EU next month.

But the veteran socialist defended his radical platform and blamed the media for helping to cause his century-old party's worst finish since before World War II.

"I will make no bones about it. The election result on Thursday was a body blow for everyone who so desperately needs real change in our country," Corbyn wrote in the Sunday Mirror newspaper.

"I wanted to unite the country that I love but I'm sorry that we came up short and I take my responsibility for it."

Thursday's snap general election turned into a re-run of the 2016 EU membership referendum in which Johnson championed the Brexit cause.

The Conservative party leader now commands an 80-vote majority in the 650-seat House of Commons -- a margin last enjoyed by the late Tory icon Margaret Thatcher in the 1980s.

A sombre but combative Corbyn said Friday that he will step aside once Labour completes a period of "reflection" about its mistakes.

The party is expected to have a new leader in place before England votes yet again in local polls in May.

Yet the 70-year-old has no clear successor after a year of infighting between a protectionist old guard backed by the unions and more metropolitan members with pro-European views.

Corbyn tried to find a balance between the two by taking a neutral position on Brexit -- a decision that Labour finance spokesman John McDonnell said proved to be fatal.

"What we tried to do is bring both sides together and we failed," McDonnell told the BBC. "I own this disaster."

Labour's campaign was also dogged by allegations of anti-Semitism that forced a handful of senior lawmakers to resign.

"But despite our best efforts, this election was ultimately about Brexit," Corbyn admitted in his letter.

"The Tory campaign, amplified by most of the media, managed to persuade many that only Boris Johnson could 'get Brexit done'," he said in reference to Johnson's campaign slogan.

"We will learn the lessons of this defeat."

The soul-searching and recriminations have been accompanied by questions in other Western countries about how far left traditionally liberal voters are prepared to go.

"Look what happens when the Labour party moves so, so far to the left," US Democratic presidential hopeful Joe Biden warned Friday.

"It comes up with ideas that are not able to be contained within a rational basis quickly."

Yet Corbyn signalled Sunday that he wanted to leave behind a legacy that keeps Labour's focus on social spending and the re-nationalisation of private industries.

He came under bitter citicism from more moderate supporters Sunday for claiming that his policies were more popular than those pushed by Johnson.

"I am proud that on austerity, on corporate power, on inequality and on the climate emergency we have won the arguments and rewritten the terms of political debate," he wrote in a separate column in The Observer newspaper.

"It's time to try something different, rather than re-enacting old battles," lawmaker Jess Phillips wrote in The Observer.

"Everywhere I campaign, I heard the same thing. It was less about Brexit and more about belief. In these places of generations of Labour voting, they did not believe a Labour government would or could deliver for them."

Labour parliamentarian Lisa Nandy agreed that the party had "lost touch with the day-to-day... experience of many of the people we want to represent".

Several other candidates are seen as disciples of Corbyn and McDonnell who would likely keep Labour on its current course.

These include business policies spokeswoman Rebecca Long-Bailey -- a 40-year-old former lawyer McDonnell said could be "a brilliant leader".