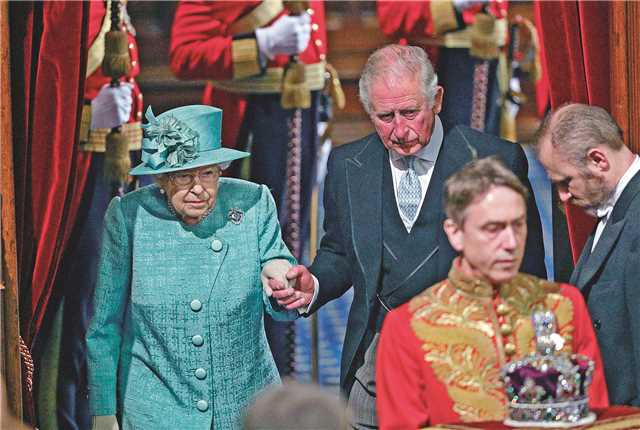 Britain's Queen Elizabeth and Prince Charles walk in the chamber during the State Opening of Parliament in the House of Lords at the Palace of Westminster in London on Thursday. (Photo: AP)

Britain's Parliament is back in business after the Queen's Speech formally declared the chamber open again following the recent general election.

Much of the usual pageantry was missing as the ceremony, setting out the plan of action for Prime Minister Boris Johnson's new government, took place for the second time in just three months.

The speech delivered by the monarch is written by the government, and outlines its legislative priorities for the coming months.

During the election campaign, Johnson promised several high-profile pieces of legislation in the government's first 100 days in charge, with major steps toward Britain's much-delayed withdrawal from the European Union by the end of January being the priority.

Guarantees on additional funding for the health service and longer sentences for violent criminals also figure highly in what Downing Street has called a "far reaching" program of domestic policies, which Johnson says he wants to help "level up" opportunity in the country, although the main opposition Labour Party, which performed disastrously at the election, said the government had "years of underfunding" in the health service to make up for.

Much of the business proposed in the previous Queen's Speech, on Oct 14, never happened because of the last session being so short, and Johnson's then-government encountering so much resistance.

But following the election, which produced a shock Conservative majority of 80 seats, the largest of any Conservative leader since Margaret Thatcher in 1987, the legislative climate is completely different.

The need for a second opening of Parliament in such quick succession, which is usually an elaborate and costly affair, was the reason for Thursday's relatively toned-down ceremony.

The Queen travelled from Buckingham Palace to Parliament by car rather than horse-drawn carriage, and she and Prince Charles wore formal clothes rather than the usual ceremonial dress.

As soon as the ceremony was done, the process of ratifying the EU withdrawal agreement that Johnson negotiated in October began, with the first debate and vote expected on Friday, to ensure that the political process that has paralyzed British politics since summer 2016 can finally get under way before the Christmas recess.

Ministers say that following the planned withdrawal on Jan 31, they are confident they will be able to conclude a new trade deal with the EU by the end of 2020, although many at the EU are deeply skeptical as to how realistic that target is.

Johnson has already made it clear he will not permit any extension of Britain's post-Brexit transition period beyond the end of next year, which has revived the prospect of a so-called no-deal Brexit, which has been widely predicted to cause huge economic and social upheaval.