The British parliament returns on Tuesday from an extended Easter break, with MPs encouraged to attend via videolink for the first time as a result of the coronavirus outbreak. 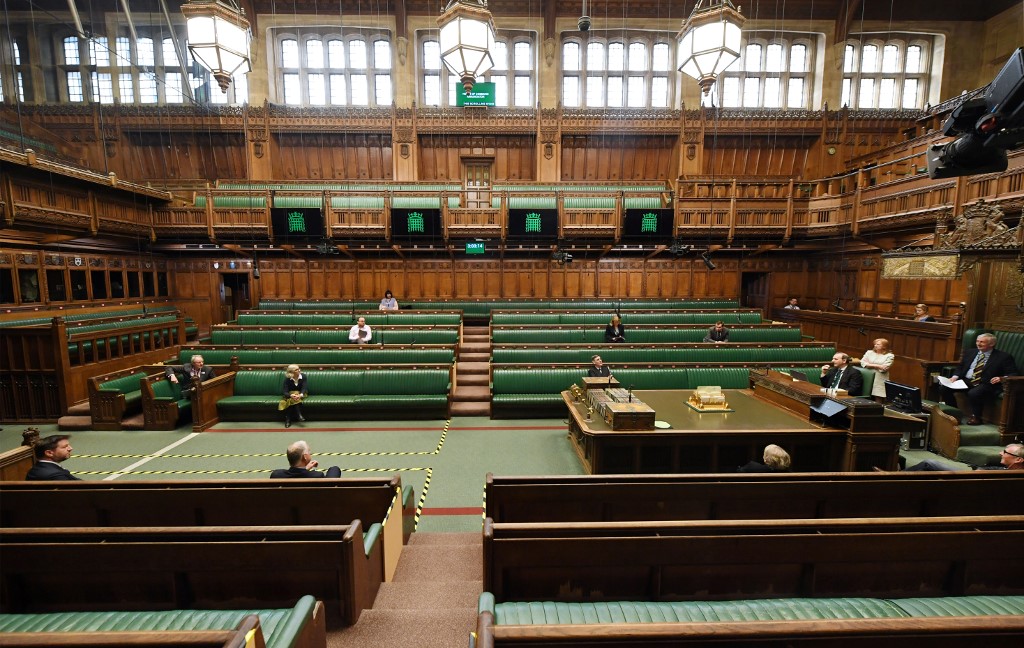 A handout photograph released by the UK Parliament shows a chamber rehearsal ahead of the return of MP's to parliament during the coronavirus lockdown in the House of Commons in London on April 20, 2020. (Photo: AFP)

Social distancing rules demanding people stay two metres apart mean only 50 MPs will be able to sit in the 650-strong lower House of Commons at any one time.

They are instead being asked to call in via Zoom, an internet video conferencing service, in a first for the 700-year-old parliament.

Screens will be placed around the chamber so that those physically present -- themselves separated by tape and signs on the green benches -- can see their colleagues dialling in.

Parliament began its Easter holiday a week early last month due to the outbreak of COVID-19, which has so far killed more than 16,500 people in Britain.

London was particularly hard hit and Prime Minister Boris Johnson was among many in parliament who became infected. He is still recovering after a week in hospital.

Britain remains on lockdown, with people asked to stay at home, but MPs were determined that parliament return as planned on Tuesday.

"In times of crisis, we must find new ways of working, just as we have done throughout history," said Commons speaker Lindsay Hoyle.

He added: "It will be a historic moment in our 700 years of history, to have MPs contributing to prime minister's questions, urgent questions and statements via videolink from the safety of their homes and offices."

Johnson's Conservatives are under mounting pressure over their response to the outbreak, from years of underfunding the health service to the decision to delay imposing a nationwide lockdown.

As healthcare staff continue to complain about a lack of protective equipment, and testing for coronavirus remains limited, debate is shifting to how the confinement measures can be eased.

Raphael Hogarth of the Institute for Government think tank said parliament did not approve the lockdown but must play a role in what comes next.

"Decisions over imposing the lockdown had to be made at pace, but decisions on the exit strategy do not need to be made as rapidly -- and must be made more transparently," he said.

MPs who attend in person on Tuesday will be asked to approve the new measures and the option to dial in to certain sessions will begin on Wednesday.

There will be a limit of 120 MPs allowed to join via videoconference, and there is currently no way for MPs to vote digitally.

The unelected upper House of Lords is also trialling a new way of operating using Microsoft Teams software, although proceedings will not be broadcast live to the public.