The month-long suspension of the British parliament ordered by Prime Minister Boris Johnson in an apparent bid to stop MPs blocking his Brexit strategy will begin late Monday, his spokesman said. 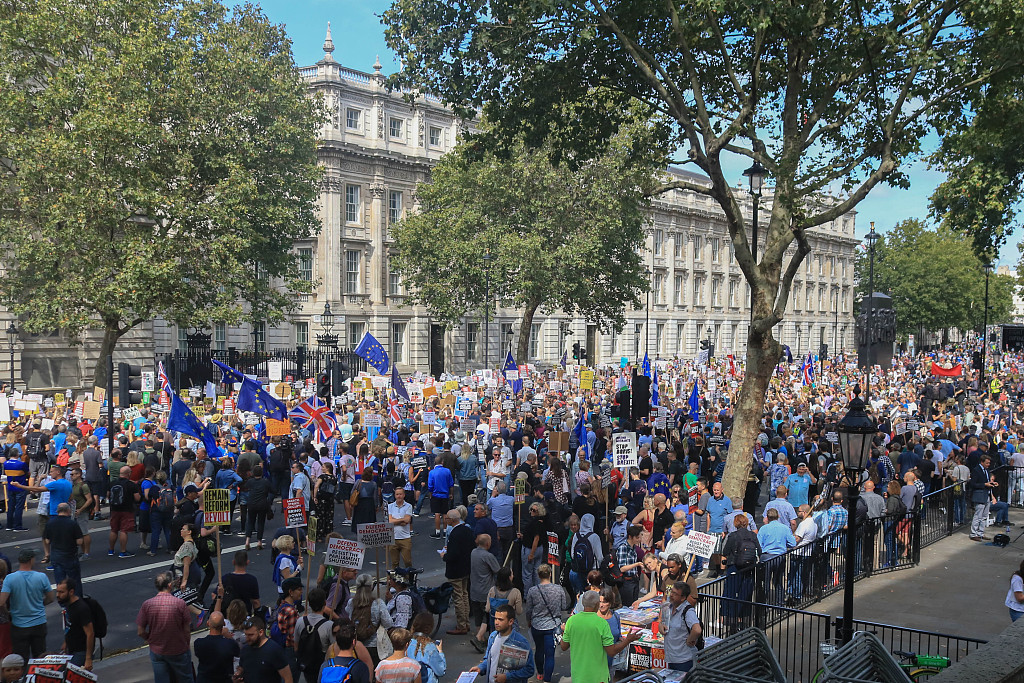 Thousands of Pro Remain supporters and activists gather outside Whitehal while holding placards during the protest against the decision made by the government to suspend the UK Parliament from 9 September to 14 October by Prime Minister Boris Johnson. (Photo: VCG)

"Parliament will be prorogued at close of business today," the spokesman said, using the parliamentary term for the suspension.

He added it would take place regardless of the outcome of a government-led vote on holding a snap election next month.

Johnson last month asked Queen Elizabeth II to close the Houses of Parliament until October 14, claiming it was needed to allow him to introduce a new domestic agenda.

But the suspension's timing and longer than unusual duration sparked uproar across the political spectrum, with critics calling it a "constitutional outrage" and a coup.

Lawmakers opposed to a no-deal Brexit said it was clearly aimed at hobbling their efforts to prevent such a scenario, while it also prompted several so far unsuccessful court challenges.

However, the move appeared to backfire on Johnson by galvanising opposition MPs and Conservative rebels into passing legislation forcing him to seek a Brexit delay next month if he has not reached a deal with the EU.

That law is expected to receive royal assent on Monday.

Johnson responded to the Tory rebellion by kicking 21 MPs out of the party -- including Winston Churchill's grandson -- and barring them from standing as Conservatives in the next election.

The hardline response prompted a fresh revolt, with several ministers -- including Works and Pensions Secretary Amber Rudd -- quitting the government and the party.