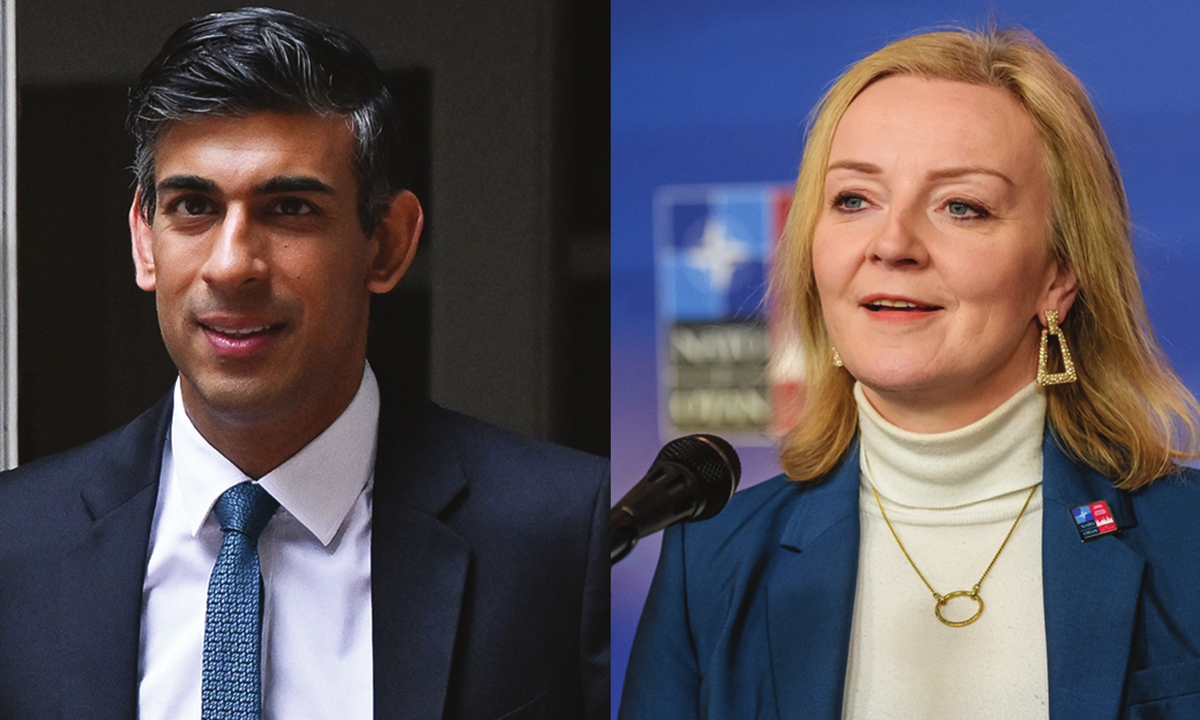 The remaining two candidates for the leadership of the Conservative Party and the new prime minister of the UK are competing with each other on who can play tougher against China during the election, and Rishi Sunak, the candidate who is perceived to support a balanced policy, is also making tough comments.

Chinese analysts said the China policy in countries like the US and the UK won't be changed dramatically with the changes of leaders, and the act of hyping the "China threat" remains one of the best options for those incompetent politicians to cover up their failures in pushing effective reform to solve domestic problems, even though they know China has nothing to do with their internal messes, and especially their economic problems, that their voters care about most.

Even if the politicians clearly understand that fixing ties with China could help them relieve economic pressure to some extent or that making damage to China-UK ties will eventually further harm the UK economy, the toxic political atmosphere makes those UK politicians, who do not have the courage or wisdom to make effective changes, opt for the easy choice rather than the right choice, experts said.

Encouraging Sinophobia and letting their people believe that the UK should blame and fear China when they are suffering from internal woes is total nonsense but an easy choice, said analysts. They noted that the remarks from UK politicians at this juncture serve their campaigns, so China doesn't need to take it too seriously, and what they do after stepping into No.10 Downing Street is much more important to watch.

Rishi Sunak and Liz Truss have clashed over who will take the toughest stance on China in the battle to become Britain's next prime minister, as the two Tory leadership contenders prepared for a crucial head-to-head television debate on Monday local time, the Financial Times reported on Monday.

Sunak, the former finance minister, said China represented "the largest threat to Britain and the world's security and prosperity this century" and proposed a series of measures to reduce Beijing's influence in the UK.

In response to media questions on Sunak's tough remarks against China, Chinese Foreign Ministry spokesperson Zhao Lijian said at a routine press conference on Monday that he won't comment on the UK's Conservative Party leadership election, which is an internal affair of the UK.

"I want to make it clear to certain British politicians that making irresponsible remarks about China, including hyping up so-called 'China threat,' cannot solve one's own problems," Zhao said.

Allies of Truss, the foreign secretary, said Sunak had been "soft" on China and that he had, until recently, been planning to hold a UK-China economic and finance conference for the first time since 2019, according to the FT.

When Sunak was the finance minister in July 2021, he said that Britain should beef up its trading relationship with China, while admitting that efforts to reopen direct access to EU financial services markets had failed, and he also showed interest in seeking more financial cooperation with China, so observers said his image is somewhat less tough toward China compared to Truss.

However, Sunak has completely changed his tune ahead of the debate with Truss. According to the FT on Monday, Sunak said he would ban all 30 branches of the Confucius Institute in the UK, arguing that the educational and cultural organization is used by the Chinese government to promote soft power in Britain's universities. He also promised tougher use of new national security laws to protect UK tech start-ups from Chinese investment and a new "NATO-style" international alliance to tackle Chinese cyber threats.

Cui Hongjian, director of the Department of European Studies at the China Institute of International Studies, told the Global Times on Monday that for the two candidates, at this stage, the key is winning support from not just the elites, but also the most conservative and grass-roots Tory members who might not have that much common sense when it comes to foreign policy. As Truss is more in favor among these people, Sunak believes that he needs to be more conservative to win.

Sunak and Truss are vying for the support of around 160,000 Conservative members who will begin voting in early August to choose their next leader, who becomes Britain's next prime minister as head of the ruling party.

Chinese analysts said the UK is currently facing serious economic problems, and if it further worsens its ties with China and affects the bilateral trade relationship, Britain will definitely suffer more, so during the election, politicians can say whatever they want to get votes, but they should also remember what their priorities are after being elected and what will happen if they really deliver on their promises.

Wang Yiwei, director of the Institute of International Affairs at Renmin University of China, told the Global Times on Monday that remarks made during elections in Western countries are not that important, and the key to observing the future of China-UK ties lies in whether there is any concrete impact on significant existing projects such as the Hinkley Point C nuclear power station.

The UK is now facing serious economic problems. According to the Guardian on Wednesday, the UK's inflation rate hit a fresh 40-year high of 9.4 percent and could hit 12 percent in October.

A planned strike by over 40,000 workers at Network Rail and more than a dozen train companies will go ahead next week, and will be the first national strike of its kind since 1995, the Guardian reported on Friday. Furious trade union leaders on July 19 also signaled a wave of strikes in the coming months after the government unveiled below-inflation pay rises for millions of public sector workers, the FT reported.

Faced with such woes, the new UK leader should not make unwise moves to harm China-UK ties, analysts said. According to European media outlet Euronews in 2021, China overtook Germany to become the UK's biggest import market, as trade in goods with European Union member states plunged due to Brexit and the COVID-19 pandemic, official data shows.

However, due to the toxic political atmosphere, UK politicians prefer to make the imprudent and easy decision to harm ties with China to please the extreme conservative and populist forces, rather than being pragmatic and make the right choice to develop China-UK ties, said experts.

Yin Zhiguang, a professor at the School of International Relations and Public Affairs under Fudan University, told the Global Times on Monday that "being tough against China is a strategy for the US and the UK politicians to cover up their long-standing systemic problem of unfairness and failed reform, to mobilize internal forces to target a so-called external threat together."

This strategy of extending hegemony will not be changed by the power transition in the Conservative Party, and it won't be shaken simply because of economic pressures, Yin said.

"With the increasingly serious economic problems, elites like Sunak and Truss could become more interested in using the 'external threat' to divert domestic attention from their incompetence and failure in making meaningful reforms to fix their problematic social and economic systems," he noted.