British Prime Minister Boris Johnson was spared a rebellion by his own MPs over coronavirus regulations on Wednesday but the House of Commons speaker accused him of treating lawmakers with "contempt". 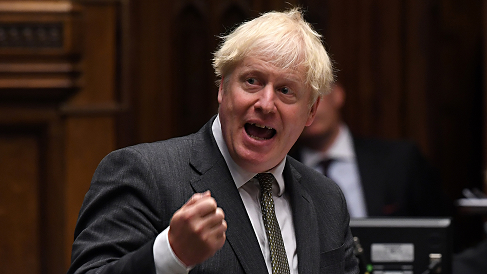 More than 50 MPs in Johnson's Conservative party had threatened to support a motion demanding more say over future rules to stop the spread of the virus, accusing ministers of governing "by decree".

But they were denied a chance to vote on the proposal after Speaker Lindsay Hoyle ruled there was not enough time for a proper debate.

However, in a rare statement delivered as Johnson prepared to take questions in the Commons, Hoyle launched a stinging attack on the way restrictions have been brought in so far.

"I am looking to the government to remedy a situation I regard as completely unsatisfactory," he said.

"I now look to the government to rebuild trust with this House and not treat it with the contempt that it has shown."

Hoyle has repeatedly admonished ministers for announcing virus restrictions to the media before parliament and for allowing insufficient time for them to be debated before they come into force.

Many lawmakers also accuse Johnson of having no respect for parliament after he shut it down last year at a crucial point in Britain's tortuous exit from the European Union -- a move later quashed and declared unlawful by the Supreme Court.

A nationwide stay at home order imposed in March in response to the coronavirus outbreak was lifted in June but new restrictions are being introduced as infection rates rise again.

Some 16 million people are now subject to some kind of localised rules across the UK, including bans on meeting other families.

The devolved governments in England, Scotland, Wales and Northern Ireland have also imposed national limits, including on social gatherings and pub opening times.

Yet there is widespread public confusion about what is allowed -- even Johnson himself has got it wrong -- while many Tory MPs are angry at the erosion of personal freedom.

The government says it must have powers to act quickly to clamp down on localised outbreaks of coronavirus, which has killed 42,000 people in Britain so far -- the highest toll in Europe.

"When you have the virus going up in the way that it is now in some parts of the country, you have to take strong, local action," Johnson told the Commons.

He will give a press conference later Wednesday with his top scientific aides to explain the latest data.