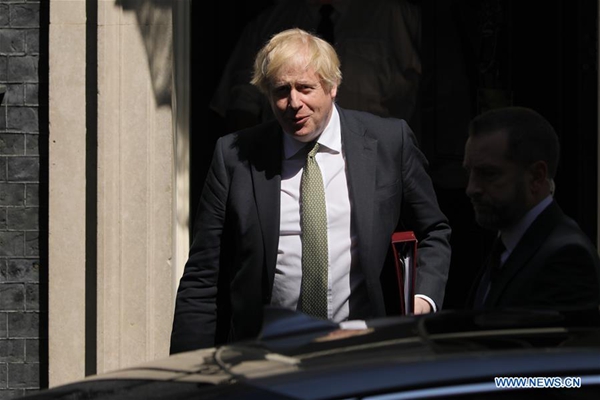 British Prime Minister Boris Johnson on Wednesday was faced with tough questions in the House of Commons (lower house of parliament) as he is mulling a "comprehensive" plan to ease the COVID-19 lockdown.

On the second day after Britain overtook Italy as the worst-hit European country by the novel coronavirus, Johnson had his first head-to-head encounter with the newly elected main opposition leader -- Labour's Keir Starmer -- during the Prime Minister's Questions, which gives MPs the chance to question Johnson.

Key points that emerged included Johnson's revelation that the government would this Sunday spell out its strategy for easing Britain out of its lockdown, and an ambition to see testing for the disease to be step up to 200,000 a day by the end of May.

Johnson is expected to lead cabinet meetings as well as emergency COBRA meetings to pave the way for the much anticipated Sunday announcement of the plan to ease Britain out of lockdown.

He said Sunday has been chosen because the government would have the data available to set out its plans.

Another 649 COVID-19 patients have died, bringing the total coronavirus-related death toll in Britain to 30,076 as of Tuesday afternoon, said the Department of Health and Social Care Wednesday.

The Daily Mail commented that when and how to ease the current draconian lockdown measures have dominated Westminster for weeks as government ministers try to figure out how to get Britain back to work.

Questioning the government's strategy to tackle the pandemic, Starmer said: "When the Prime Minister returned to work a week ago Monday, he said that many people were looking at the apparent success of the Government's approach, but yesterday we learned that, tragically, at least 29,427 people in the UK have now lost their lives to this dreadful virus."

How did it happen, he further asked.

In response, Johnson said it was too early to draw comparisons with the data from other countries.

Chairing Wednesday's Downing Street daily briefing, Secretary of State for Housing, Communities and Local Government Robert Jenrick also insisted that "It is difficult to make international comparisons with certainty today, there will be a time for that."