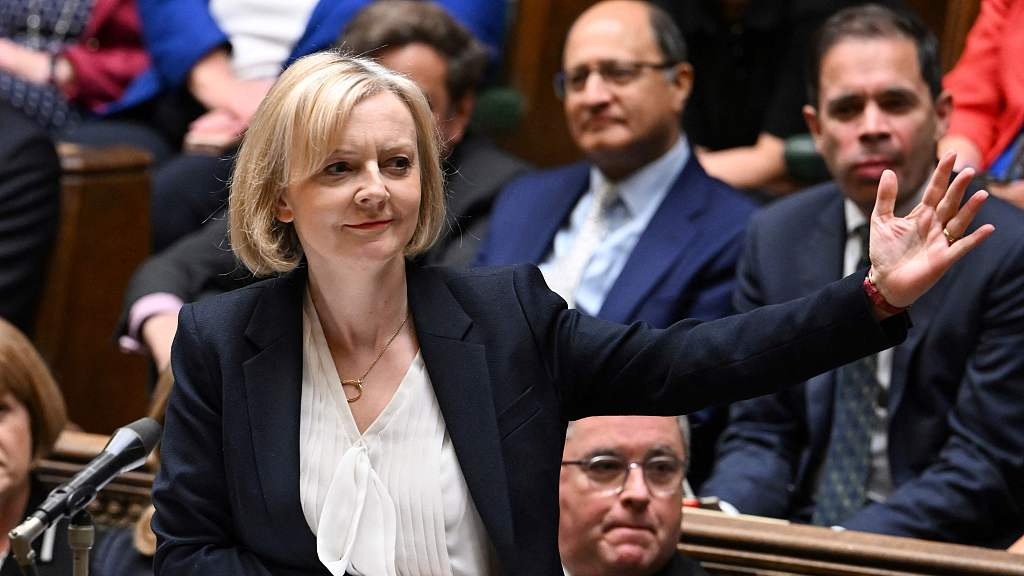 A handout photograph released by the UK Parliament shows Britain's Prime Minister Liz Truss speaking during Prime Minister's Questions in the House of Commons in London on October 19, 2022. /CFP

British Prime Minister Liz Truss struggled to retain a grip on power on Thursday, a day after a second top minister quit and rowing and jostling broke out among her lawmakers in parliament in a dramatic breakdown of unity and discipline.

Six weeks into the job, Truss has been buffeted by a bond market rout, suffered the lowest approval ratings of a British leader in decades, abandoned almost all of her policy program and has now lost her interior minister, who quit on Wednesday, less than a week after she fired her finance minister.

Lawmakers openly argued in parliament on Wednesday amid confusion over whether a vote on fracking was a confidence vote in her administration.

There were reports – later contradicted – that the government's chief whip, who is in charge of parliamentary enforcer, had resigned.

In a sign of the chaos, Downing Street issued a statement at 1:33 a.m. local time to say the prime minister had "full confidence" in the chief whip and her deputy.

"The whips will now be speaking to Conservative MPs who failed to support the government," a government spokesperson said. "Those without a reasonable excuse for failing to vote with the government can expect proportionate disciplinary action."

Truss has been fighting for her political survival since September 23 when her finance minister at the time, Kwasi Kwarteng, announced a "mini-budget" of vast, unfunded tax cuts that sent shockwaves through financial markets.

British borrowing costs have soared, threatening to hit the housing market and aggravate a cost-of-living crisis.

The government's subsequent reversal of those measures has added to the challenge for Truss to stay in Downing Street – an impression deepened by the chaotic scenes in parliament on Wednesday.

A handful of lawmakers have openly called for Truss to quit, and others have discussed who should replace her.

Transport minister Anne-Marie Trevelyan, asked by Times Radio if Truss would lead the Conservative Party into the next election, expected in 2024, said, "At the moment, that is still the case."