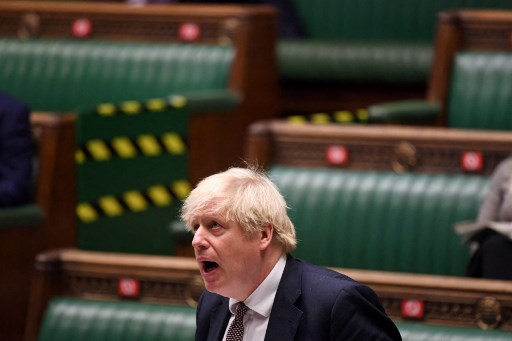 British Prime Minister Boris Johnson faced a call to resign on Monday after claims he dismissed the prospect of thousands dying from Covid-19, as a row over government "sleaze" escalated.

In a front-page headline, the Daily Mail newspaper reported that Johnson had said he would rather see "bodies pile high in their thousands" than impose a third coronavirus lockdown.

Ultimately, Johnson did order a new round of restrictions in January.

But he is now locked in a damaging war of words with his former top aide Dominic Cummings over his coronavirus policies last year and financial dealings.

Defence Secretary Ben Wallace said the Daily Mail report, based on unnamed sources, was "not true" and had been "categorically denied by practically everyone".

"None of this is serious. The prime minister has been utterly focused on delivering, alongside Cabinet colleagues, the response to Covid," he told Sky News.

The main opposition Labour party wants an urgent inquiry into Cummings' claims made in an explosive blog post. But the Scottish National Party (SNP) went further.

"These comments are utterly abhorrent. If they are true, @BorisJohnson has a duty to resign," SNP leader in the UK parliament Ian Blackford tweeted.

"The Prime Minister must now come to Parliament to give a statement, and face questioning, on these shocking claims and the growing Tory sleaze scandal engulfing Westminster."

Johnson has faced sharp criticism over his handling of the coronavirus pandemic. In Britain, one of the countries worst hit in the world by the disease, more than 127,000 people have died from Covid.

But increasingly the prime minister is facing questions over his wider judgement and integrity, following weeks of stories about alleged inappropriate lobbying and special favours.

Cummings, the strategist behind the 2016 campaign for Britain to leave the European Union, quit Downing Street in December under a cloud of acrimony.

The former senior adviser wrote on his personal blog on Friday that Johnson had sought to use potentially illegal donations to renovate his publicly funded Downing Street accommodation.

Cummings also wrote that Johnson had raised the prospect of blocking an internal inquiry into leaks because they could implicate a close friend of his fiancee Carrie Symonds.

Simon Case, Britain's most senior civil servant, is to be questioned by lawmakers later on Monday over the allegations against Johnson, his ministers and officials, which Downing Street has dismissed as false.