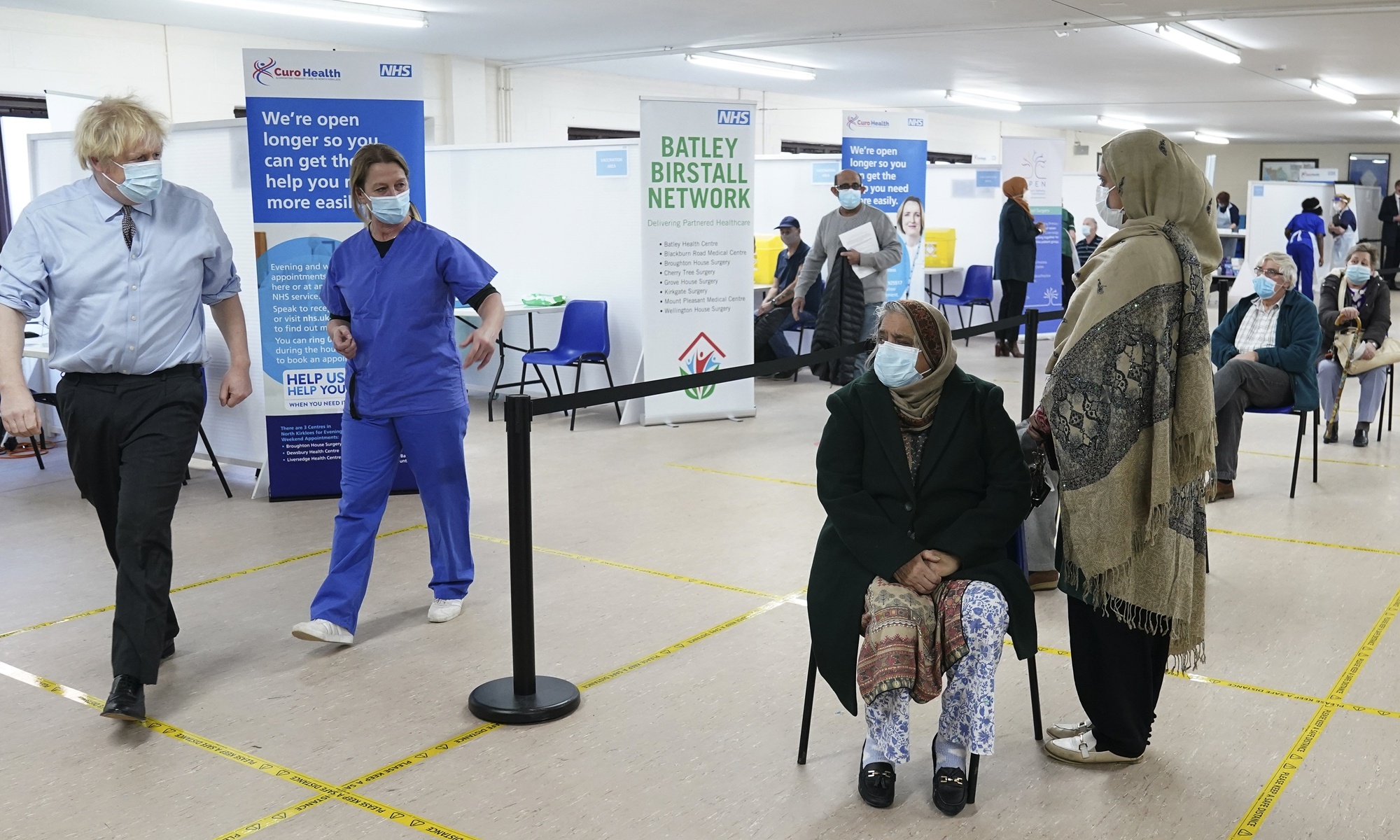 Britain's Prime Minister Boris Johnson (left) walks past members of the public waiting to receive their vaccine as he visits a COVID-19 vaccination center, the Al-Hikmah Vaccination Center in Batley, England on Monday. A total of 598,389 people in the UK received a first vaccine dose on Saturday, the highest daily figure since the rollout began. (Photo: AFP)

British Prime Minister Boris Johnson is under mounting pressure to lift all COVID-19 lockdowns in two and a half months as lockdown-sceptic Tories called on him to commit to a timetable for easing the restrictions with a complete end to controls by the end of April.

In a letter to the prime minister, leaders of the Covid Recovery Group (CRG) said the "tremendous pace" of the vaccination rollout means restrictions in England should begin easing from early March, the London-based Evening Standard newspaper reported on Sunday.

They said ministers must produce a cost-benefit analysis to justify any controls that remain in place after that date, with a "road-map" stating when they would be removed.

The letter was organized by the CRG chair and deputy chair, Mark Harper and Steve Baker, and was said to have the backing of 63 Conservative Party lawmakers in all.

The letter was sent to the prime minister at a time when a government scientific advisor warned that Britain could face another coronavirus wave as big as the current one if lockdown restrictions were all lifted.

Professor Steven Riley, a member of the Scientific Pandemic Influenza Group on Modelling, has said the rollout of the vaccination program did not mean coronavirus controls could be dropped.

"No vaccine is perfect," he told a BBC radio program. "We are certainly going to be in the situation where we can allow more infection in the community but there is a limit."

"If for some reason we were to choose to just pretend it (coronavirus) wasn't here any more then there is the potential to go back to a wave that is a similar size to the one that we are in now," he added.

The prime minister confirmed Saturday that the reopening of schools "is still his priority", followed by opening shops and then hospitality.

This was further reiterated by British Foreign Secretary Dominic Raab, who said on Sunday that the British government remained focused on reopening of schools on March 8.

The British ministers said they are confident they will meet their target of getting an offer of a vaccine to all 15 million people in Britain in their four priority groups, including all over 70s, by Feb. 15's deadline.

During a visit to a vaccine manufacturing facility in Teesside on Saturday, Johnson said he was "optimistic" he could announce plans for a "cautious" easing of the rules when he sets out his "road-map" out of lockdown on Feb. 22.

However, he said ministers would have to look at the data "very, very hard" before taking any decisions as they did not want to be forced into a "reverse ferret" if the disease started to spread again.

In contrast, the CRG, in their letter, said that the government's "national priority" of re-opening schools in England by March 8 "must" be achieved.

By Easter, they said pubs, restaurants and other hospitality venues should be able to open in a way that is COVID-secure but still allows them to operate "in a commercially viable manner".

And by the end of April, when all the government's top nine priority groups, including all over 50s, should have been offered a vaccine, they said there will be "no justification" for any legislative restrictions to remain.

"COVID is a serious disease and we must control it. However, just like COVID, lockdowns and restrictions cause immense social and health damage and have a huge impact on people's livelihoods," the letter said.

By March 8, the government's top four priority groups, which account for 88 percent of deaths and 55 percent of hospitalizations, will have had their first dose of the vaccine at least three weeks earlier allowing time for protection to kick in, it said.

"All restrictions remaining after March 8 should be proportionate to the ever-increasing number of people we have protected," it added.

"The burden is on ministers to demonstrate the evidence of effectiveness and proportionality with a cost-benefit analysis for each restriction, and a roadmap for when they will be removed," it noted.

Downing Street refused to be drawn on reports suggesting that restrictions on meeting friends in a park could be among the first to be lifted once schools are back.