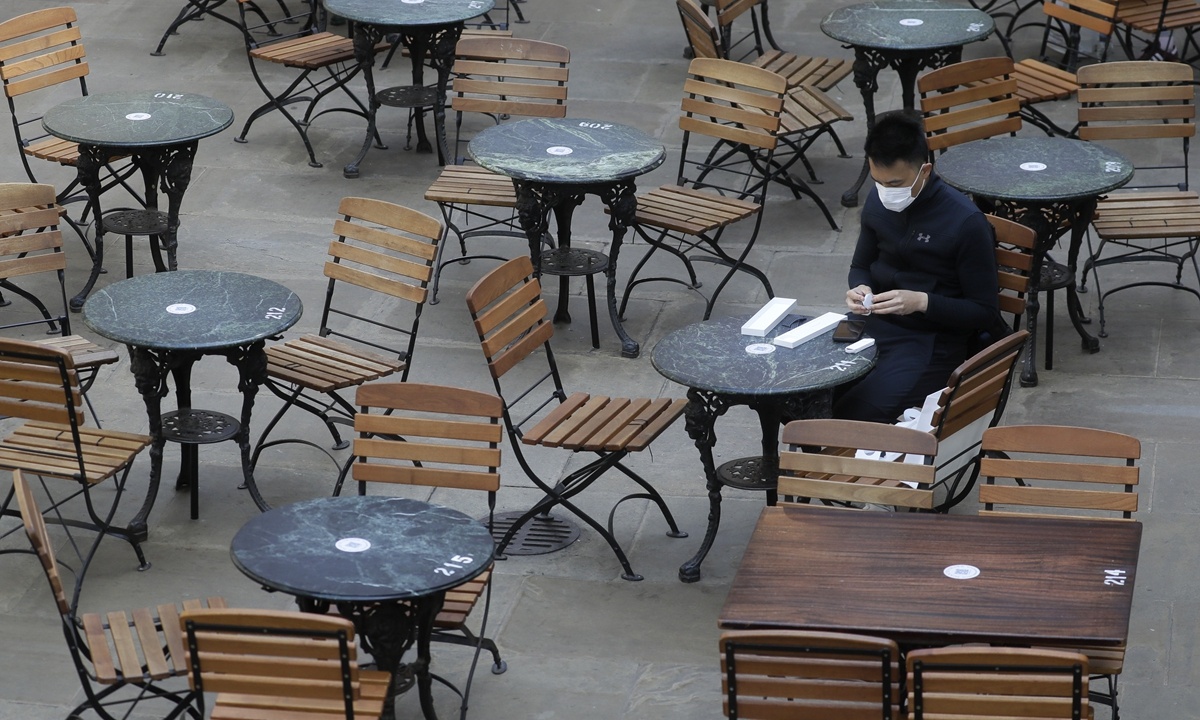 A man sits in an empty cafe in London on Thursday after Britain’s Prime Minister Boris Johnson announced new restrictions to combat the rise in coronavirus cases in England. The UK had more than 412,000 COVID-19 cases as of Thursday. Photo: AP

Promising to build a better country over the coming 10 years, British Prime Minister Boris Johnson on Tuesday delivered an upbeat message at the annual conference of the ruling Conservative party, held virtually because of the pandemic.

It is Johnson's first conference speech since his landslide victory in December's snap general election, which gave him an 80 seat majority.

Despite his optimistic note, grave concerns remained about the raging coronavirus pandemic with about 17 million people across the country subject to additional lockdown restrictions.

"The country that emerges from the crisis will be very different from the one that preceded it. It is not enough to go back to normal. We have lost too much. We have mourned too many...We will not content ourselves with a repair job," Johnson said.

The prime minister said he planned to introduce 95 percent mortgages with long fixed terms to help young people get onto the housing ladder.

Among others, he also pledged that offshore wind power would be powering every home in the country within ten years.

In his speech, Johnson made reference to some of the restriction measures imposed to tackle the virus that came under attacks by some politicians.

"I don't know about you, but I have had more than enough of this disease that attacks not only human beings but so many of the greatest things about our country -- our pubs, our clubs, our football, our theater and all the gossipy gregariousness and love of human contact that drives the creativity of our economy," said Johnson.

Local media reported Tuesday that dozens of Conservative MPs were threatening to reject the continued 10 p.m. curfew on bars and restaurants. Politicians will have a vote Wednesday on the measure that has already seen hundreds of restaurants and bars closing until the curfew is lifted,

Politicians, leisure industry officials and even some senior police officers have said the curfew causes problems, with thousands pouring out of bars onto the streets to continue to party.

In the House of Commons (lower house of parliament), the chair of the Treasury Select Committee, Mel Stride, called for support for hospitality businesses, saying many thousands of jobs were being put at risk because of lockdown measures.

The impact of restrictions have been felt strongest in northern England, with Manchester and Liverpool both reporting massive increases in COVID-19 cases.

It has fuelled speculation that even tougher lockdown measures could soon be introduced across large areas of the north.

The leaders of four of the north's biggest cities, Manchester, Leeds, Liverpool and Newcastle wrote Tuesday to British Health Secretary Matt Hancock, calling on him to improve local coronavirus measures, saying they were extremely concerned about the sharp increase in new COVID-19 cases in their areas.

Another 14,542 people in Britain have tested positive for COVID-19, bringing the total number of coronavirus cases in the country to 530,113, and the coronavirus-related deaths rose by 76 to 42,445, according to official figures released Tuesday.

Previously, Johnson has warned that Britain's fight against coronavirus pandemic may be "bumpy through to Christmas" as the country continues to see a sharp rise in infections.

In another development, to bring life back to normal, countries such as Britain, China, Russia and the United States, are racing against time to develop coronavirus vaccines.