WORLD UK PM urged to tear up her Brexit plan

UK PM urged to tear up her Brexit plan 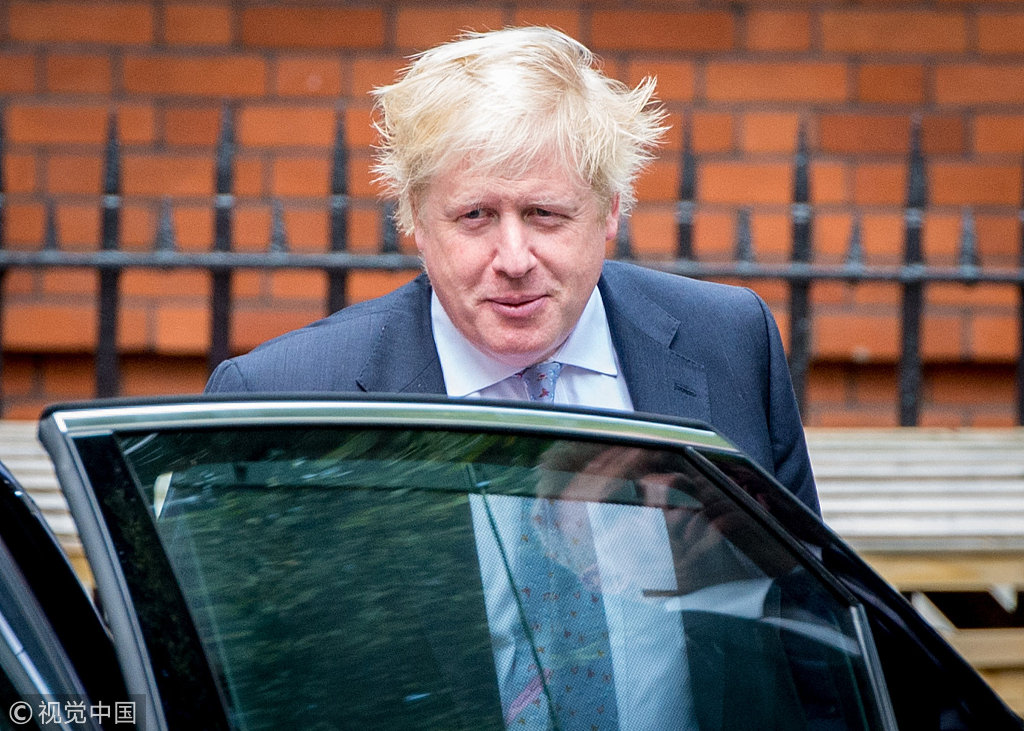 Boris Johnson MP, departs from the Foreign and Commonwealth Office's official residence in London, July 18, 2018. The former Foreign Secretary is expected to deliver a resignation speech in the House of Commons.  [Photo/VCG]

Johnson, who resigned 10 days earlier in protest at the so-called soft-Brexit agreed by May and her top ministers earlier this month, used his resignation speech in the House of Commons to describe her proposals as placing Britain in a "miserable permanent limbo".

May told a meeting of select committee chairpersons that papers detailing a no-deal scenario will be published this fall.

In his speech Johnson fell short of calling for May to face a leadership challenge, instead praising her courage and resilience.

But he said a needless fog of uncertainty had descended on the proposals May had mapped out as the future trade deal once Britain ended its membership of the European Union.

He told MPs: "Given that in important ways this is Brexit in name only, I am of course unable to support it and am happy to be able now to speak out against it.

"It is not too late to save Brexit. We have time in these negotiations. We have changed tack once and we can change again."

Johnson added: "We need to take one decision now before all others, and that is to believe in this country and what it can do because the UK's admirers across the world are fully expecting us to take back control."

There was a mixed reaction to Johnson's speech which won praise from Nigel Farage, a member of the European Union and co-founder of the United Kingdom Independence Party (UKIP).

Farage described it as a well delivered speech but added: "it is hopeless to expect Mrs May to deliver on any of it."

In latest opinion polls UKIP has gained several points after its support collapsed in last June's snap general election which led to May losing her majority in the House of Commons.

There was little respite for May after spending two days defending her Brexit legislation program in the Commons on Monday and Tuesday, winning her crucial trade and customs bills by narrow margins.

Those bills are critical to Britain's future working relationship with Brussels.

While Johnson was delivering his speech May was along the corridor in the Houses of Parliament facing a grilling from a liaison committee, made up of every chair of every House of Commons select committee.

Earlier she had faced a tough session during prime minister's question time, coming under attack from the main opposition leader, Labour's Jeremy Corbyn.

May said at the liaison committee that dozens of documents spelling out the actions needed to prepare for a no deal Brexit are to be published.

She told members of the committee: "Over August and September we are going to be releasing a number of technical notifications to set out what UK citizens and businesses need to do in a no deal scenario, so making much more public awareness of the preparations. We imagine there are going to be around 70 of those technical notices that will be issued."

But May admitted that some aspects of the customs arrangements plan she has devised might not be ready by the end of 2020. That is the deadline when a transition period is due to end after Britain and the EU agreed to continue working together after Britain formerly leaves next March. The transition period is intended to give time for new trading arrangements to be introduced.

After her 90-minute grilling at the liaison committee May faced a meeting of her backbenchers, winning support from most of them.

Media reports said around 40 Conservative MPs had submitted letters to party managers calling for a confidence vote in May's leadership. It falls eight short of the 48 needed to trigger a vote.

There was a moment of relief for May when one of her MPs, Simon Clarke declared he was withdrawing his letter of no confidence in the prime minister and said others should give May their backing.

Clarke told waiting journalists that he had put in his letter last Tuesday following the resignations of Johnson and Brexit Secretary David Davis, but since had had second thoughts.

"We have got a mission in government and it is serious. God knows, the threat of a Corbyn government is real," Clarke said.