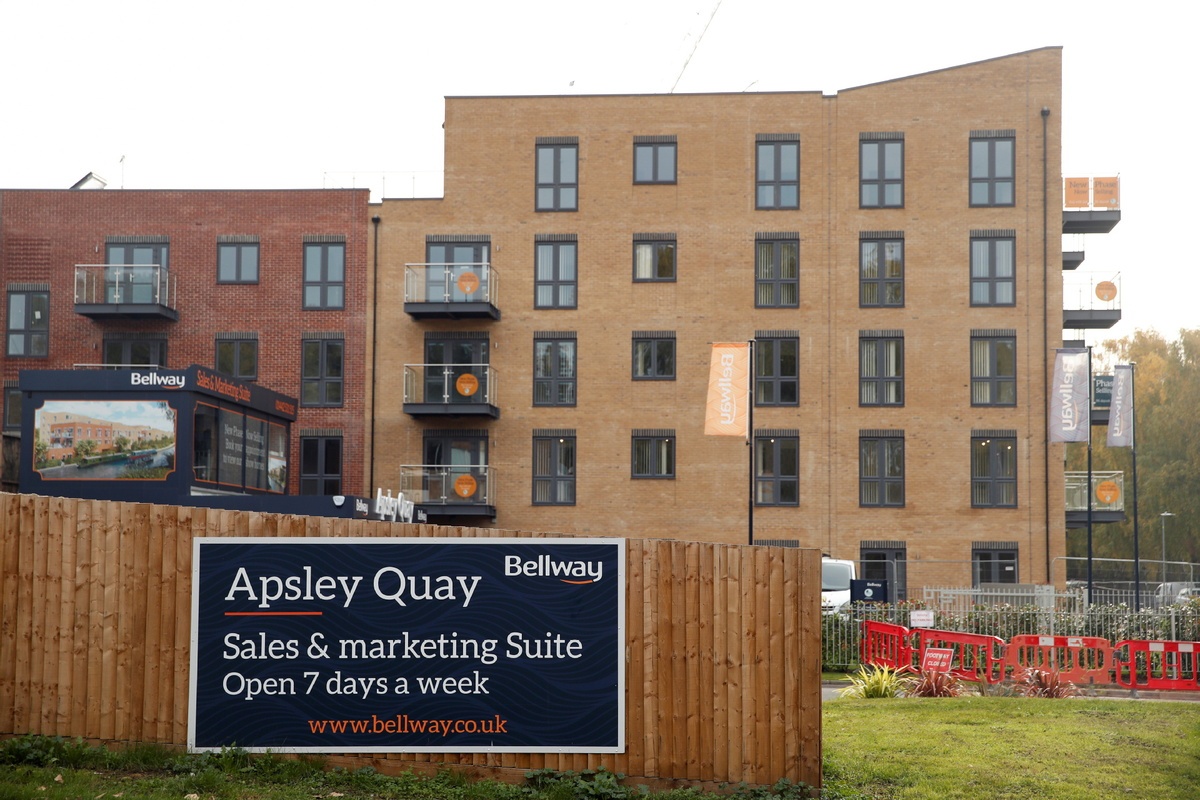 A building is seen at a Bellway housing development site in Apsley, Britain on Oct 19, 2020. (Photo: Agencies)

The United Kingdom's housing sector has bucked the trend during the novel coronavirus pandemic by flourishing amid an economic gloom that has devastated many industries, with the volume of mortgage approvals rising in November to its highest rate for 13 years.

The Bank of England says in its latest analysis of the health of the housing market that the clamor to buy a home was driven, in part, by a so-called stamp-duty holiday, which means prospective buyers no longer have to hand over a percentage of the sale price to the government in the form of taxes.

The pandemic itself has also stoked interest by nudging many people out of crowded cities in favor of more spacious homes in the suburbs and outlying villages.

But Samuel Tombs, the chief UK economist at consultancy Pantheon Macroeconomics, told the Guardian newspaper the scheduled end of the stamp duty holiday in March could bring about an abrupt cooling off.

"The mortgage market is heading for a hard landing," he said.

Tom Bill, the head of UK residential research at the estate agents Knight Frank, was more optimistic, telling the paper: "While the end of the stamp-duty holiday in March will clearly have an impact on transaction numbers, the effect will be reduced if the pandemic has entered the endgame. Some buyers and sellers may hesitate in coming weeks, but sentiment will ultimately improve over the course of the year."

The Bank of England analysis shows banks and building societies in the UK approved mortgages for 105,000 home purchases during November, which was the most since August 2007. The number was up by 7,700 on October's total.

From a low in applications for credit of 200 million pounds ($272 million) in April, borrowing rose to 5.7 billion pounds during November.

As a result of the increased demand, house prices have boomed during 2020 to a six-year high.

The pandemic has also seen households paying off debts during the lockdown, with 17.3 billion pounds of consumer credit having been paid off since March, the bank said.

Economists have warned the boom could soon end, both as a result of the end of the stamp-duty holiday and because of an anticipated surge in unemployment as a post-pandemic economic downturn gathers momentum.

Halifax, the UK's largest mortgage lender by total loans, predicts the economic outlook means house prices will fall during 2021 by between 2 percent and 5 percent. The government's economic forecaster, the Office for Budget Responsibility, expects the drop to be to the tune of around 8 percent.

The forecaster said the UK economy shrank by around 11.3 percent during 2020, which was its biggest decline for 300 years, and says an unemployment rate of 9.7 percent is on the way, signaling a cooling of the housing market.