LONDON, Feb. 22 (Xinhua) -- Another 10,641 people in Britain have tested positive for COVID-19, bringing the total number of coronavirus cases in the country to 4,126,150, according to official figures released Monday. 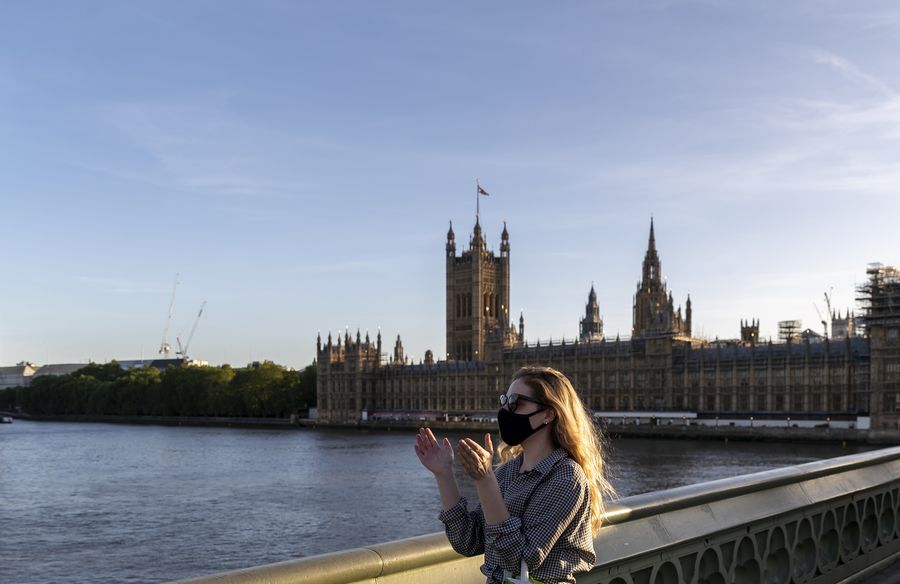 A woman wearing a face mask takes part in the weekly "Clap for our Carers" for the last time in front of the Houses of Parliament in London, Britain, on May 28, 2020. (Xinhua/Han Yan)

The latest figures were revealed as more than 17.7 million people in Britain have been given the first jab of the coronavirus vaccine.

Schools in England will reopen from March 8 as first part of the four-step plan, which Johnson said was designed to be "cautious but irreversible".

In the second step, non-essential retail, hairdressers and public buildings like libraries and museums will reopen from April 12, Johnson told lawmakers at the House of Commons, the lower house of the British parliament.

In the third step, from May 17, the "rule of six" will be abolished for outdoor gatherings if the data allows and the gathering of up to 30 people will be permitted.

In the fourth step, from June 21, all legal social restrictions are expected to be removed, with the reopening of the final closed sectors of the economy including nightclubs, said Johnson.