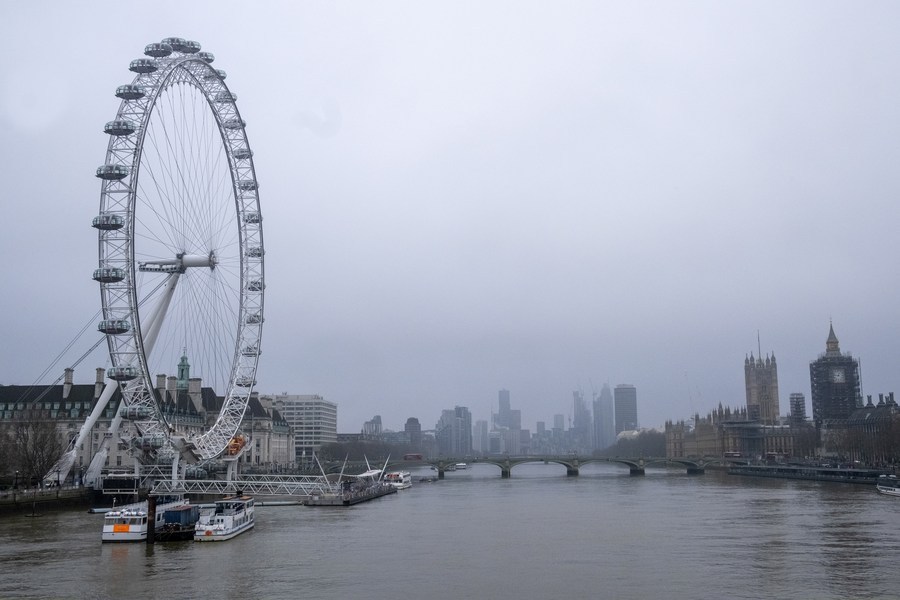 Photo taken on Jan. 1, 2021 shows a general view of the London Eye and the Westminster Bridge, in London, Britain. (Photo by Ray Tang/Xinhua)

Another 57,725 people in Britain have tested positive for COVID-19, marking the highest daily increase in coronavirus cases since the pandemic began in the country, according to official figures released Saturday.

The total number of coronavirus cases in the country now stands at 2,599,789, the data showed.

Another 445 have died within 28 days of a positive test, bringing the total number of coronavirus-related deaths in Britain to 74,570, the data showed.

The latest figures were revealed as British medical experts warned that tougher days are still ahead due to the spread of the new virus strain, which is said to be 70 percent more transmissible.

"This new variant is definitely more infectious and is spreading across the whole of the country. It seems very likely that we are going to see more and more cases, wherever people work in the UK, and we need to be prepared for that," Andrew Goddard, president of the Royal College of Physicians, told the BBC.

"All hospitals that haven't had the big pressures that they've had in the South East, and London and South Wales, should expect that it's going to come their way," he added.

London and many other parts of England have already been under the highest Tier Four restrictions, which require residents in the areas to stay at home, with limited exemptions.

In Tier Four areas, people are also urged to work from home when they can, and should not enter or leave those areas. People should also not mix with anyone outside their own household, apart from support bubbles.

To bring life back to normal, countries such as Britain, China, Germany, Russia and the United States have been racing against time to develop coronavirus vaccines.