LONDON, Oct. 13 (Xinhua) -- The coronavirus-related deaths in Britain rose by 143 to 43,018, marking the highest daily figure since June, according to official figures released Tuesday. 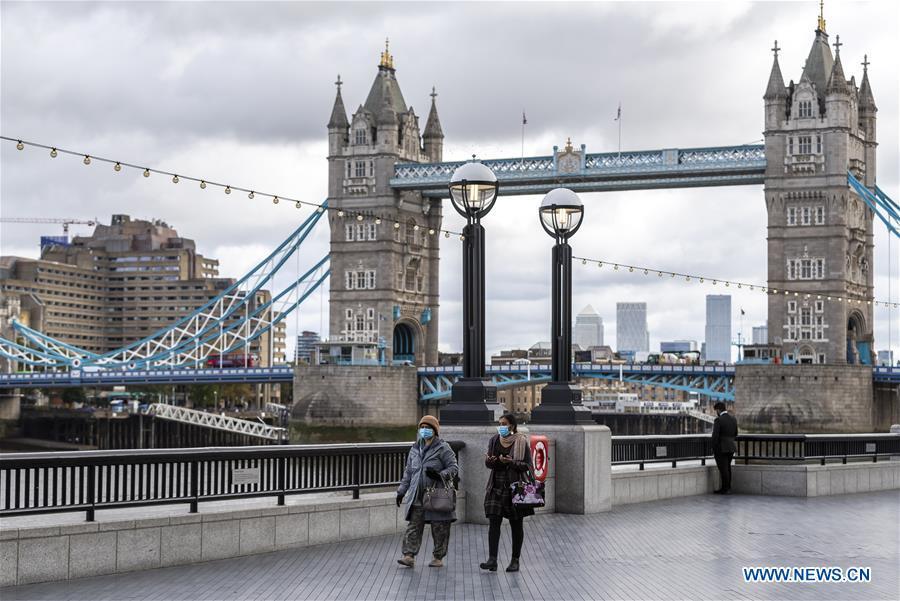 Another 17,234 people in Britain have tested positive for COVID-19, bringing the total number of coronavirus cases in the country to 634,920, the latest data showed.

The figures came as British Prime Minister Boris Johnson set out a new three-level COVID-19 alert system that will be implemented across England, with the level being decided according to local infection rates.

The alert system comprises three levels: "Medium", "High" and "Very High". The Liverpool City Region will be placed in the "Very High" level from Wednesday, according to Johnson. This level will see venues such as bars and pubs closed unless they can operate as restaurants, while people are also banned from socializing with other households.

Currently, most of England, including London, is placed in the first tier of the government's three-tier system, which means an alert level of "Medium".

London mayor Sadiq Khan said Tuesday that it is "inevitable" that London will pass a "trigger point" for tougher coronavirus restrictions in the "next few days".

"All the indicators I have, hospital admissions, ICU occupancy, the numbers of older people with cases, the prevalence of the disease, the positivity are all going the wrong direction," the London mayor told the Sky News.

"Which means, I'm afraid, it's inevitable over the course of the next few days London will have passed a trigger point to be in the second tier," he added.

His warning came as countries, such as Britain, China, Russia and the United States, are racing against time to develop coronavirus vaccines.