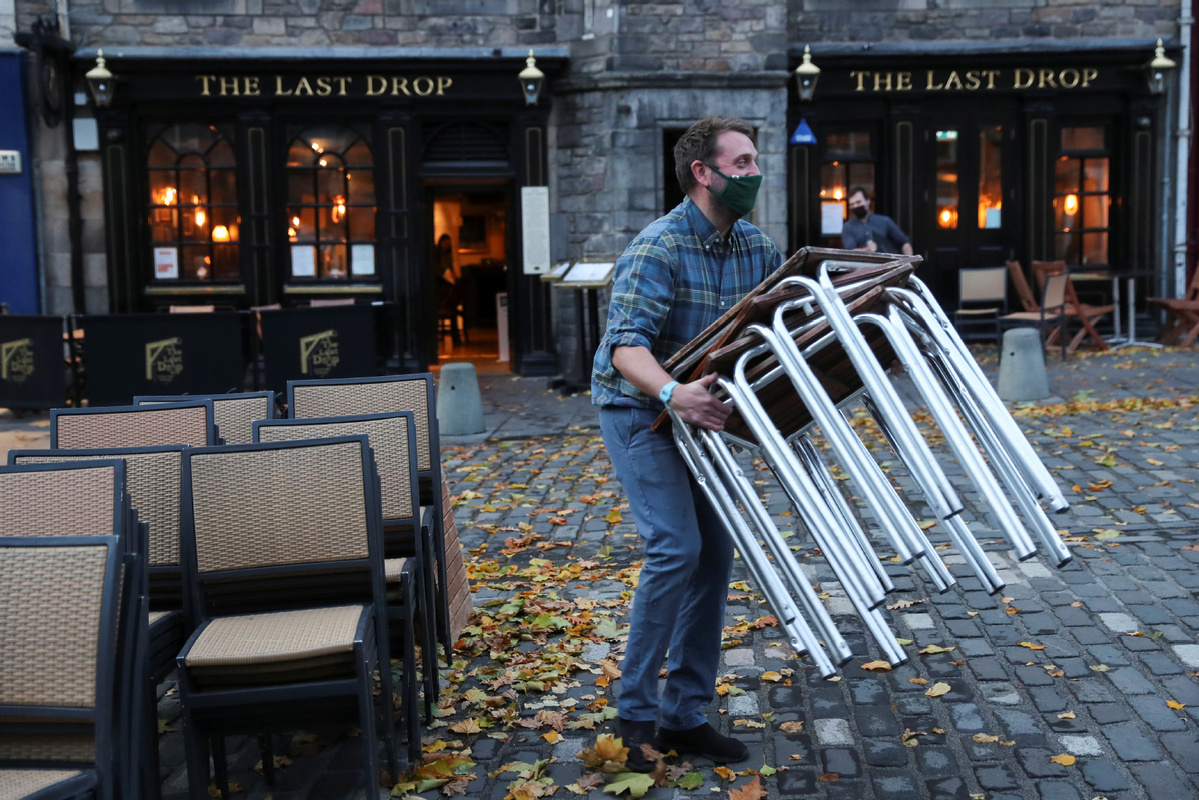 A worker carries tables as he prepares to close a pub at Grassmarket, amid the coronavirus disease (COVID-19) outbreak, in Edinburgh, Britain, October 9, 2020. (Photo: Agencies)

Alcohol and drug abuse soared in the United Kingdom during the novel coronavirus lockdown, creating overwhelming demand for treatment services, according to latest health figures.

Organizations that work with people with addictions are dealing with more recorded cases because of the staggering number of people who developed dependencies in recent months; either to combat the boredom, or to deal with the stress of coping with the pandemic.

The problem has become so severe that the Royal College of Psychiatrists has warned that people could miss out on lifesaving care.

"COVID-19 has shown just how stretched, under-resourced, and ill-equipped addiction services are to treat the growing numbers of vulnerable people living with this complex illness," she told the BBC.

Sinclair said drug-related deaths and alcohol-related hospital admissions were at an all-time high before the pandemic began and have become even more common.

"I fear that, unless the government acts quickly, we will see these numbers rise exponentially," she said while calling for additional funding.

The organization, which represents 18,000 psychiatrists, said more than 8.4 million people in England were drinking alcohol at high-risk levels in June, compared with 4.8 million in February.

That equated to 10.8 percent of the population of England engaging in high-risk drinking in February and 19.4 percent doing so by April, according to The Independent newspaper.

There were 3,459 new cases of adults seeking help with opiate addiction in April, compared with 2,947 a year earlier, statistics from the National Drug Treatment Monitoring System showed.

"Social isolation and a lack of a human connection is a big factor behind why some people turn to alcohol as a coping mechanism," said Laura Bunt from the charity We Are With You, which helps people who have drug, alcohol and mental health problems.

She said the UK had some of the highest levels of alcohol-caused harm in Europe before the lockdown began in March.

The UK's Department of Health and Social Care said it has increased funding in the face of the growing problem. It now directs 3.2 billion pounds ($4.2 billion) toward public health services. Specifically, the National Health Service is tackling alcohol abuse with new "care teams "in hospitals where alcohol-related admissions are deemed to be high.

The teams have been tasked with intervening in 50,000 cases during the coming five years.

The stakes are high because people with alcohol and drug problems tend to be at a higher risk of developing serious complications if they become ill with COVID-19.

Research has shown that people who use prescription drugs, including benzodiazepines such as diazepam, which are commonly used to treat anxiety and insomnia, are also more vulnerable to the virus.

Andrew Molodynski, who leads the British Medical Association's work on mental health, said skyrocketing addiction rates were "alarming (but) unfortunately not surprising" because the lockdown has contributed to both isolation and unemployment.

"Now more than ever, it is crucial that some of this (funding) is directed toward substance abuse services, as the impact of isolation along with the potential impact of job losses and economic downturn gives rise to higher dependence on substances," he said.

Many people also turned to substances because of financial problems and the stress of juggling work and childcare during the pandemic, according to the Daily Mail newspaper. People have also sought help for addiction to painkillers after becoming hooked on them and not seeking proper medical help for painful conditions, it said.

Many doctors said that excessive drinking and drug use, no matter what the cause, will have a major impact on the nation's health for years to come and they predict increases in strokes, heart attacks, liver disease, stomach ulcers, pancreatitis and depression as a result.

Public Health England found in a survey of 10,000 people that alcohol and drug abuse is now at its worst among middle-class people, with more than four in every 10 people in that demographic consuming too much alcohol. Many other studies by health agencies and groups have similar conclusions.

NHS Digital reported that hospital admissions linked to alcohol are 60 percent up on the number a decade ago. Public Health England found the number of adults consuming more than 50 units of alcohol a week rising by 33 percent since the lockdown began.

A major study by researchers at King's College London published at the end of May reported that 29 percent of adults were drinking more than they did before lockdown.

Ian Gilmore, chairman of the Alcohol Health Alliance UK, told the Evening Standard newspaper that services have not grown to keep up with the changes.

"Before the pandemic, only one in five harmful and dependent drinkers got the help they needed; that proportion will be significantly lower now," Gilmore said, while also calling for more government spending on addiction services in the years to come.